‘Grave Encounters’ — How This Found Footage Franchise Re-Mystified The Subgenre 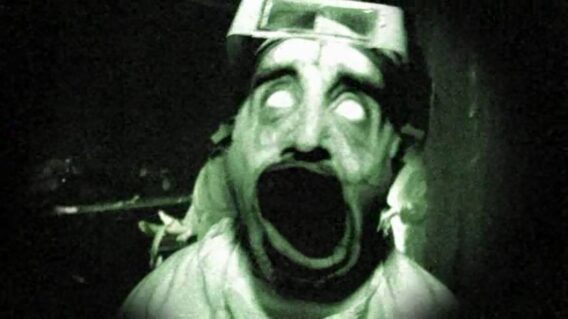 In 2011, the world was exposed to the last recording of a group of hopeful ghost hunters, trapped in over their heads by a malevolent asylum with a sinister desire to keep them inside forever.

A year later, after deciding to make a documentary about the missing crew, a young film student and his friends venture into the same haunted asylum, determined to expose the truth…or die in the process.

The Grave Encounters films have carved themselves a very dedicated space in horror circles. For anyone with an open mind, it’s easy to see why. Dripping with an oppressive atmosphere, the Collingwood Mental Hospital is a hellscape. It’s paradoxically inescapable and replete with tortured ghosts and mentally broken prisoners. And yet, the allure to follow an unsuspecting film crew inside is irresistible. The movies prey on morbid curiosity. It possesses the alluring desire in every horror fan that drives them to watch somewhat simple characters unwittingly bring about their own demise.

Even still, the franchise is not without its fair share of detractors. Critics of the Grave Encounters movies call them cheap, shallow, unoriginal, and, most frequently of all, unrealistic. “Why are they still recording? Why haven’t they left yet? Nobody would act like this“. And while neither the original Grave Encounters, nor its sequel, are perfect by any stretch of the imagination, these criticisms are usually trotted out for any release in the found-footage genre.

But almost two decades ago, the landscape for found footage movies was wildly different. That was mostly owed to the fact that there was no real landscape for the genre back then. Although Cannibal Holocaust technically warrants being recognized as the progenitor of the trend, it wasn’t until 1999’s The Blair Witch Project that found footage erupted into the mainstream as a legitimate filmmaking style, and to incredible effect. Legend has it that following the film’s debut in theaters, its “based on a true story” framework and immersive online marketing convinced viewers across the United States that what they had seen was actually real; the three young filmmakers caught in the camera’s lens had actually befallen some horrible fate.

Indeed, directors Daniel Myrick and Eduardo Sanchez promoted their indie Hail Mary by labeling their lead actors as “missing” on IMDB. This led to an outpouring of condolences being sent to the parents of the trio. For many people, The Blair Witch Project had transcended the confines of the celluloid it was shot on. It became something much more tangible; it was real.

And while a huge chunk of that phenomenon can be chalked up to the ingenious way that the film was marketed, it’s undeniable that the film’s success also owed itself to the youth of found footage at that point. When it was new, found footage seemed to shave away some of the polish provided by traditional horror films shot. Society in the 90s could not have foreseen the effects of the Age of the Camera Phone.

Also Read: ‘The Curse of Professor Zardonicus’ Is A Wild Found Footage Dive Into A Strange Urban Legend [Trailer]

Today, self-recorded video provides an opportunity to construct your own fantasy by carefully curating every single aspect of your online persona. But back then, camcorders and home videos were designed to replicate life exactly as it was; by using those same mediums in service of a fictional narrative, Sanchez and Myrick (for lack of a better word) effectively gaslit audiences into wholeheartedly authenticating what was essentially a glorified ghost story.

However, in the 23 years since The Blair Witch Project’s release, Hollywood has discovered an entirely new dimension to the found-footage genre: cost-efficiency. Since 1999, found footage films have recouped extravagant amounts of money for fairly low budgets. The first Paranormal Activity grossed over $193 million on a production budget of $15,000. But the discovery of this uncharted market quickly resulted in its total oversaturation. Soon enough, found footage movies gained a reputation amongst general audiences for being formulaic, nauseating, and just plain boring. Corporate greed and artistic soullessness had replaced the guerilla spirit of the genre’s beginnings. For every [REC] and V/H/S, there was an Amytiville Haunting or The Gallows waiting around the corner.

Found footage had lost its edge. More specifically, it had gained the clean corporate edges that existed to reassure audiences that what they were watching was safe, and assuredly, not real. But in 2011, the Vicious Brothers set out to blur those lines once again. They dropped the unsuspecting crew of a fake ghost-hunting series named Grave Encounters into the middle of the very real haunting of the Collingwood Psychiatric Hospital. It’s a former asylum haunted by the spirits of patients abused and lobotomized by the unhinged Doctor Friedkin.

Once the crew closes the doors of the asylum behind them, they unknowingly sealed their own fates. Instead of feigning a paranormal haunting for the entertainment of fans, they end up capturing a real one. By framing Grave Encounters’ original expedition as a hoax-in-the-making, the Vicious Brothers were able to restore the digital camera to its roots. They unintentionally capture a visceral and brutal haunting in between its frames. Even when the crew is picked off one by one, until only the show’s would-be host Lance Preston remains, it’s the camera, not him, that is recovered from the asylum. It’s the camera that blurs the line between what’s real and what’s not.

Grave Encounters 2, while being a messier film, takes this metaphor further by introducing us to Alex Wright. He’s a film student who becomes increasingly convinced that the events of the first Grave Encounters film are real. Alex’s conviction is so strong that he even visits the producer, Jerry Hartfield, who put together the footage and released it. But he passes credit onto two interns who he refers to as “The Vicious Brothers”. The sleazeball executive outright admits to Alex that the events of the first film are real. But that doesn’t matter because audiences will never believe the truth.

This revelation isn’t enough to stop Alex, however. He convinces his friends to help him film a documentary exposing the truth by going inside Collingwood himself. Alex, like many horror fans across the globe, has an intense dedication to this film. It’s to the point where he affirmed its existence into a tangible piece of reality. It’s something he can interact with, and unfortunately, a narrative that he becomes a part of himself.

Just like before, once the doors of Collingwood close behind the young filmmakers, the walls start to twist in on themselves. The hospital traps them inside and pushes them further and further into the heart of something that feels alive. At one point Alex and his friends even discover Sean Rogerson, the real name of the lead actor who played Lance Preston in the original Grave Encounters film. He’s been trapped inside for over nine years. Rogerson has been in contact with the entity that manipulates the asylum and discovers that the only way for someone to escape this purgatory is to follow the commands of the entity…and finish the film.

Also Read: 7 Found Footage Movies You Can Watch For Free On Youtube [Video]

After losing most of his friends one by one and watching the asylum punish Rogerson for failing to complete his goal, Alex realizes that the only way for him to escape is to finish his documentary. And he does by killing his girlfriend Jennifer on camera. True to its promise, the asylum releases him. It spits him onto the streets of LA where he brings the footage to Jerry Hartfield, who once again releases it as a film. The final scene of Grave Encounters 2 is an interview between Alex and Jerry, on the eve of the film’s release. A reporter asks Alex if the events he caught on camera were real. Alex smugly denies the claim, urging fans and audiences to go visit Collingwood themselves and see just how “fake” the movie really is.

In an incredibly clever way, Grave Encounters 2 uses a meta-narrative to deconstruct the shared suspension of belief that horror movies force us into. When 30 people shuffle into a movie theater and the lights come down, it doesn’t matter whether or not we know the events therein are fake; all that matters is that for the next hour and a half, what we see on that screen is real. Found footage movies are overwhelmingly criticized for seeming “unrealistic” or “fake”, despite their continued attempts at delivering some degree of authenticity. The Vicious Brothers know this.

By wrapping the narrative of the second film up in a conspiracy regarding the validity of the events of the original raises some uncomfortable questions about the tangibility of what lies beyond the film screen. Can something really be fake if the fear and terror it instills inside you are real? In fact, Alex’s final line is just as much of an affirmation as it is a dare. How willing are you to believe that your distance from the images captured on camera keeps you separate from the demons you so gleefully seek out on one?

Are you willing to stake your life on it?