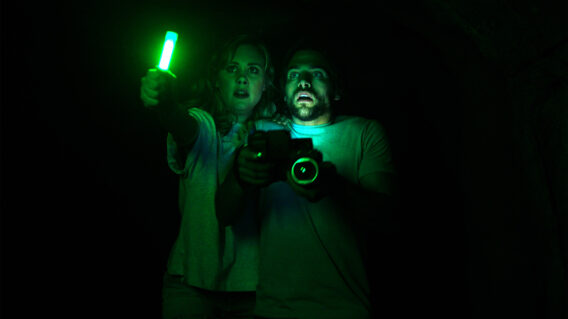 Before I review Malibu Horror Story, it’s crucial to understand the film’s rollercoaster of a past. Director Scott Slone started working on the film in the late 00s, catching the wave of films like Cloverfield and Paranormal Activity. But time and time again, Slone and his team found themselves delaying and reshaping the project. They wanted to create something that would stick out amongst a barrage of new found footage. The result is a horror film that isn’t simply a found footage movie. It’s a time capsule of the subgenre, of how the idea of found footage has shifted in the last 15 years. It’s an incredible piece of history. And thankfully it’s also pretty damn entertaining.

Malibu Horror Story opens with four YouTubers setting up equipment in a dark cave. They’re angling cameras, talking over the script, and making sure everything is set for their shoot. The third-person omniscient camera flows between characters as it sets the scene; something creepy is about to go down.

One of our hosts Ashley (Valentina de Angelis) explains to the camera that they’re about to hold an EVP session to speak to the spirits that haunt the cave. After a successful session where something comes through the spirit box, the group celebrates with a drink. This all feels very familiar, the typical “influencers do something idiotic for views” tale. But, expectations are quickly subverted as Jessica (Rebecca Forsythe) asks Josh (Dylan Sprayberry) to watch a cut on her laptop.

Here, Slone transitions us seamlessly into his version of a second screen horror film as we watch Jessica’s edit of a video about this very cave. It’s essentially all of their research and establishing the context to why they’re in this specific place. It looks the typical Buzzfeed Unsolved episode. The hosts take turns sharing the story of the four Malibu boys who, after graduating, disappeared. This is where they show the “true” found footage, taken by the boys while on a camping trip.

The footage not only shows what happens on the camping trip, but the debauchery on graduation night full of drugs, alcohol, and nudity. The controversy paints a picture of spoiled boys getting to do whatever they want. It provides a more complex narrative about these kids and makes their disappearance feel all the more real.

But the real horror lies in newly discovered footage that reveals that something in this cave attacked the boys. The paranormal theory involves the spirits of Indigenous people seeking revenge on the white people who massacred them. This is where the narrative stumbles as it relies on dated tropes about Indigenous people to shape its horror. These three stories all come together to tell a, well, horror story about a haunted cave and the people who think they can conquer it.

There are three distinct layers of media in Malibu Horror Story: the initial found footage, the YouTubers’ rough cut of their latest episode, and the frame narrative of the ghost hunters filming in the cave. These layers of media are like rings on a tree, each indicating the passage of time and a new interpretation of first-person POV filmmaking. The central nugget, the traditional handheld footage of partying teens and their bloody demise, was Slone’s initial film.

What makes Malibu Horror Story stand out is how well Slone moves between his layers of media to make it feel believable. This isn’t just a jarring switch between first-person and third-person perspectives. Every move between perspectives is done purposefully. It convinces me that hybrid found footage can be executed beautifully. This film shows that you can make to make something that appeals to found footage lovers like me, as well as people who may get nauseous at the idea of 90 minutes of handheld video.

The use of gore and practical effects are also utilized well across the board. This again creates cohesion among the three different “movies” while also delivering scares that’ll satisfy any audience. Douglas Tait and Troy James, the contortionists who play the creature, twist and turn across the screen, giving The Exorcist’s Reagan a run for her money. Blood soaks through each layer of media, creating an entertaining yet ultimately nihilistic entry in the found footage genre. Despite taking place over a span of 15 years, the monster and effects don’t feel wildly mismatched, making the film feel like a seamless narrative. It’s an impressive feat for a film that, for all intents and purposes, is a Frankenstein’s monster of sorts.

The found footage purist in me does crave more first-person moments that delve into the horror of the cave. But if I put that aside, Malibu Horror Story is a look into the future of the first-person POV horror filmmaking technique. Slone’s knowledge of the subgenre and his ability to weave together both found footage and traditional narrative creates something that any horror fan will enjoy. Hybrid is the future of the subgenre and Slone is on the cutting edge.

In its seamless use of both found footage and traditional narrative techniques, ‘Malibu Horror Story’ is a look into the future of found footage. And the future looks bright.