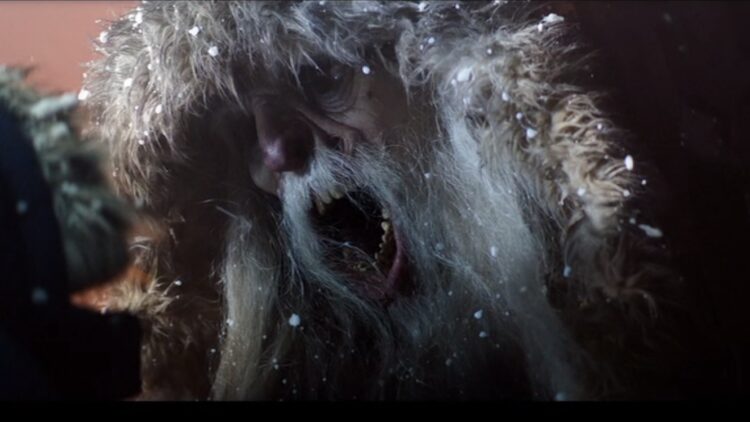 Welcome to Terror on the Turntable! In this monthly column, join Rachel Reeves as she explores the powerful and unholy alliance that exists between horror films and their scores. Covering only scores that have been released on vinyl, it’s a conversation about the intersection of music theory, composer style, film history, and the art of deep listening. So, light the candles, put on your headphones, and get ready to drop that needle. The sacred ritual of listening to music on wax is about to begin. For this installment, Rachel slides down the chimney into Douglas Pipes’ myrrh-aculous Krampus score.

Any way you slice the fruitcake the fact remains—the holidays are upon us. Creeping further and further up the calendar each year, it now seems as if the holiday season starts the moment those Thanksgiving leftovers hit the fridge. And as anyone who has ever worked retail can attest, the first sign of impending manufactured-cheer usually comes in the form of hackneyed holiday melodies eeking through raspy overhead speakers while waves of Black Friday shoppers pour through the door. However, it is also this deep-seated marriage of holiday and harmony that makes Christmas a particularly potent celebration.

Over the years, cinema has contributed a whole sleigh-full of wondrous and worthy musical memories. For example, John Williams’ heartfelt Home Alone score, Jerry Goldsmith’s mischievous Gremlins, Vince Guaraldi’s classic A Charlie Brown Christmas, and Danny Elfman’s The Nightmare Before Christmas score have all transcended their respective films to become synonymous with the Christmas holiday itself. Equally comfortable on a holiday playlist or directly connected to their visual counterpart, these special scores are truly gifts that keep on giving, year after year. And while horror has most certainly tossed its fair share of holiday scores into the offering tray, few have acquired a coveted place on the mantle as quickly and effectively as Douglas Pipes’ score for Michael Dougherty’s 2015 film, Krampus.

A life-long musician and Los Angeles native, Pipes’ interest in film music took hold at an early age. After successfully scoring a few indie films, Pipes decided to hone his craft further by immersing himself in various collegiate programs. During this time, Pipes developed a working relationship with UCLA student, Gil Kenan. Hitting it off quickly, Kenan and Pipes collaborated on multiple student films and one very special hybrid animation short called The Lark. It was through this short that Kenan caught the eye of none other than Robert Zemeckis who was looking for an up-and-coming director to helm the animated feature film, Monster House. Securing the gig with ease, Kenan knew just who to call to compose the score. A huge break for both, Monster House would prove to be the stepping stone into the big leagues for both Pipes and Kenan.

Also Read: Terror on the Turntable: Step Into the Light of Jerry Goldsmith’s Classic Poltergeist Score

After seeing Monster House, Pipes came onto the radar of director Michael Dougherty. A friend of Kenan, Dougherty instantly thought of Pipes and his music when he found himself in need of a composer for his first feature film, Trick ‘r Treat. An anthology love letter to Halloween, Trick ‘r Treat’s careful balance of originality with highly self-aware referential material quickly cemented the film as a cult horror classic. And there, supporting Dougherty’s vision at every turn, was Pipes’ music. Ultimately delivering a highly evocative, engaging, and enthusiastic orchestral score practically bursting with spooky-fun energy, Pipes’ music was a perfect partner for Dougherty’s playfully dark visual aesthetic and style. Not only did Pipes understand the assignment that Dougherty presented him with, but he also aced it with flying orange and black colors.

Due to their successful collaboration on Trick ‘r Treat, Dougherty didn’t hesitate to call Pipes when another holiday horror script began to percolate: Krampus. Using the popular Germanic folktale as its foundation, Krampus tells the tale of one dysfunctional family’s struggle with maintaining authentic Christmas spirit. After a series of domestic squabbles, young believer Max (Emjay Anthony) denounces his Christmas spirit, thus inadvertently summoning St. Nicholas’ devilish, horned counterpart, Krampus. Descending upon Max’s neighborhood with a horde of mischievously nefarious minions, Krampus and his crew wreak havoc with their own special blend of anti-Christmas terror. Forced to band together in order to survive, Max and his family journey through trauma, snowdrifts, hurt feelings, overrun attics, and deeply repressed love on their way back to rediscovering their Christmas spirit.

Also Read: Feeling The Groove of Death In ‘Final Destination’ [Spins and Needles]

Aside from being creatively compatible, there were several other reasons why Pipes was a perfect fit for bringing Dougherty’s vision of Krampus to life. For one, Pipes had already successfully tackled one major holiday. He was also experienced in composing and creating with an orchestral tonal palette that naturally fit Krampus’ holiday atmosphere. And finally, and perhaps most important, Pipes had effectively demonstrated his deep understanding of melody through his past work. This fact would prove to be crucial as Dougherty and Pipes envisioned a score for Krampus that lived and breathed Christmas spirit. Fully embracing Christmas’ unique relationship with music, Pipes’ ability to juxtapose familiar thematic material with fully original material would ultimately deliver a score fit to be wrapped and placed under the tree.

“Much like Williams, Goldsmith, and Horner, Douglas is one of those rare  composers who still understands the importance of themes, melodies, and tonal balance, even when crafting the score for a horror film. And like the film itself, some of Douglas’ cues are scary and suspenseful, others whimsical and playful, while others are surprisingly tragic, sweeping, and poignant, but all of  them manage to capture that elusive and mysterious Christmas magic.”

Displaying and establishing this deliberate and interesting approach to the score quite early on in the film is the track “Family Reunion.” Just as Max’s cousins, aunt, uncle and crotchety Aunt Dorothy (played to perfection by Conchata Ferrell) show up, a playful air of polite tension settles in. Crisp percussion, twittering violins, resonant cellos, and cheeky brass beats capture the awkwardness circling about the room. Keeping this taut emotional momentum going, the track seamlessly transitions and evolves with the addition of low woodwind and flute elements. While expertly maintaining the emotional state of the characters on the surface, underneath, a subtle undercurrent of holiday sentiment ebbs and flows.

As chord progressions allow, Pipes cleverly sneaks in a whole host of familiar seasonal tunes and sounds throughout Krampus’ score. In “Family Reunion” alone, melodies from classics like “God Rest Ye Merry Gentlemen,” “Carol of the Bells,” “We Three Kings,” and “The Nutcracker Suite” can all be detected if one pays close attention. Flirtatiously interplaying with Pipes’ original music and intentional instrumentation choices, these famous melodies are sometimes slowed down, modulated, or so deliberately simplified that their presence disappears almost as quickly as they register. Like an auditory wink to the audience, these sentimental injections of melody act as a subconscious support system to everything unfolding onscreen. Just as important as the wardrobe, creature design, and production design, this precocious utilization of seasonal musical touchstones acts as the angel on top of the tree, embodying the spirit of Christmas.

Along with these cheekier melodic moments, Pipes also displays a natural affinity for the darker side of Krampus’ story. Just as Krampus makes his undeniable presence known, the track “The Shadow of St. Nicholas” kicks in. As low drones set the tone, blaring bursts of brass puncture the atmosphere with skittery strings acting as auditory anxiety. As the tension builds, the sweeping, low melody takes center stage. Mysterious, intimidating, and unquestionably sinister in nature, the melody works in tandem with calculated choices of accompanying instrumentation. Low chimes, ethereal vocals, cymbal slices, rustling chains, and almost primal percussive beats strengthen Krampus’ cold and menacing spirit. Although playing in the same functional ballpark as Pipes’ usage of traditional song melodies, the use of viscerally metallic sounds reinforces the chilly history of Krampus and his reputation.

While both contrasting moods are ultimately executed in top-notch fashion, it is where the two meet that Pipes’ skill for intuitive, emotional scoring really shines. For example, in the track “The Wish,” Max finds his belief in Christmas and his personal spirit deeply shaken. Bitter and upset, Max literally sends his letter to Santa thrown to the wind in small, torn pieces. Accompanying this emotional moment in the film, Pipes starts the track off with a sweet, youthful melody performed on piano. Traditionally a family instrument, this deliberate choice adds a soft, intangible cultural association to its appearance. Acting as a sonic representation of Max and his family unit, the beautiful piano and violin melody flawlessly shifts with Max’s emotional state. Taken over by low cellos and a darker key, a fantastical, full-bodied, and magical segment of music unfolds.

Also Read: Naughty to Nice: The Twelve Films of Krampus

Matching this hugely important turning point in the film, a highlighted portion of “Carol of the Bells” appears. A naturally melancholic piece of music traditionally performed in a minor key, “The Wish” stands as a singular track that encapsulates the often conflicting emotions associated with Christmas. Even though the time can be a really lovely and beautiful time for a lot of people, it is also openly a hard and difficult time for just as many. Perhaps even more common is the ability for Christmas to embody both emotional states at the same time. Despite the fact that Max is presented in Krampus as a young believer, the journey he traverses and the struggle he navigates regarding the Christmas spirit is a hugely relatable one. It is here, walking this line of love and hate that Pipes’ music shines as something truly special.

A picture-perfect score from beginning to end, Douglas Pipes created a surprising and refreshing modern Christmas classic with Krampus. By masterfully playing with cultural expectations of what Christmas sounds like, Pipes’ music ultimately embodies the spirit so crucial to the film and its story. Not only that, but it is the music that adds the last, perfect layer of personality and terror to Krampus and his cohorts. Hyperaware of every beat, every note, every instrument, and associated subconscious link, Pipes uses each to its full potential. Whether experienced as a standalone listen, or absorbed along with the film, the fact remains that the music of Krampus has earned its rightful place under the treasured tree of Christmas classics.

Instantly garnering critical and audience praise, Waxwork Records wasted no time bringing Pipes’ Krampus score to the eager, drooling masses. In 2016, they released a 2xLP version on both Candy Cane Swirl vinyl as well as one on red translucent vinyl. On top of that, Waxwork also released a stunning 2xLP picture disc version featuring a few of Krampus’ incredibly creepy and memorable elves. While beautiful to look at, this particular release (like many picture discs) does have a reputation for being slightly noisy. All three versions are currently out of print. But the right choice for you and your listening needs can likely be met through your local record store or the ever-dependable Discogs.