Feeling The Groove of Death In ‘Final Destination’ [Spins and Needles]

In the latest Spins and Needles, R.C. Jara looks at 'Final Destination,' teen ennui, and an exquisite use of Nine Inch Nails. 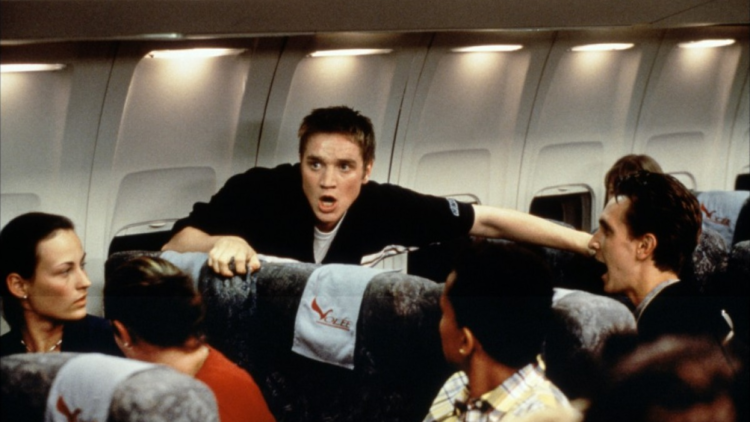 Welcome to Spins And Needles, a monthly column where R.C. Jara digs into a famous needle drop from the world of horror. This month, they dig into a few of the iconic musical moments from Final Destination.

As difficult as it may be to watch now, Final Destination is musically rich. Often, it’s the late, great Shirley Walker who guides the viewer through the existential dread at the film’s center. Walker’s score captures the emotional rollercoaster of loss after loss. It also never fails to imbue iconic scenes-such as the introduction of Tony Todd’s Bludworth-with proper menace. Haunting brass notes play over the opening images of our protagonist’s room, building carefully to a string section. In Walker’s hands, close-ups of unremarkable objects carry a sense of foreboding. At times, the score leans into the mystery of the narrative. Trumpets evoke the gray morality of film noir and the foggy headspace of characters fully attuned to the troubled world around them.

When we are introduced to Alex Browning (Devon Sawa), he is already a character on the verge of combustion. Before he boards the cursed flight that would claim the lives of nearly everyone in his French class, Sawa plays Alex’s superstitions with empathy and a slightly unhinged demeanor. He is able to pull the film to his center and his paranoid inflections make the drama palatable. The role of an abstract tormentor heightens his abject fear.

There is a heavily pronounced sense of anxiety around young adulthood in the film that none of the grownups are able to pick up on. The warmth of a loving family exists almost tangentially. Alex is sent off to France during an uncomfortable scene with his parents, where his concerns go unspoken. Save for brief interactions with the father of his best friend Tod Waggner (Chad Donella), there’s a disconnect between parent and child. This makes the tragedy of Flight 180 all the more heartbreaking.

Though writer Jeffrey Reddick had to compromise on aging his characters down, the finished film is ultimately better for it. Final Destination feels like the worthy successor to Wes Craven’s vision of tortured youth in A Nightmare On Elm Street, which Reddick himself has cited as an influence. Similar to Nightmare’s Nancy Thompson, Alex must navigate a world where he is constantly being talked down to or ignored by people with authority. A lack of solidarity with Nancy claims people in her circle. Eventually, she is left alone to tackle Freddy Krueger at the expense of unprocessed survivor’s guilt.

Final Destination updates that theme by dispersing that pressure on each teenager and making a pariah out of Alex. But there is no dream demon to act as a proxy for the sins of the parents. Instead, the kids in Final Destination are held in contempt of the adults around them. Their fears and judgments are directly projected onto Alex. Although the extent to which overbearing authority figures have a hand in screwing up their children is less pronounced than in Craven’s film, it is still present.

The memorial service is a scene emblematic of a repressed milieu in the aftermath of Flight 180. The service comes off impersonal in spite of mass death. Even the priest’s sermon is cold in tone. Every gesture here is platitudinous and creepy with the dead themselves being commemorated by a giant sculpture of an eagle. Lacking the space to properly grieve, the core group of student survivors is left with nothing to do other than go at each other’s throats. Not even the harrowing death of Alex’s only friend opens him up to sympathy.

Tod is a catalyst for Alex to find purpose in the chaos, though he becomes a vessel for more conspiracy theories than he knows how to handle, and it takes him the better part of the film’s runtime to figure out “death’s design.”  The more Alex investigates, the more he dissociates and the film constantly threatens to fall apart with him. As Clear Rivers (Ali Larter) puts it, Alex is “reluctant to take shape.” Reddick, along with director James Wong, effectively synthesizes the growing pains of young adulthood with supernatural horror. Every step Alex takes in the journey to find answers to life’s most esoteric questions is the exact wrong one. Coupled with the alienation from a coherent support system, the hopelessness of the film is overwhelming. Yet the film is not without a nasty sense of humor.

Aside from Walker’s score, Final Destination’s needle drops are integral to its wild plotting. What separates the music in this film from other teen-centric horror films is its capacity for turning grim moments inside out. Whether this takes away from the overall impact is subjective. But hearing a death-obsessed teenager unpack John Denver’s “Rocky Mountain High ” while “torquing a wicked cable” is exactly the kind of gag that keeps the film from dipping into self-seriousness. The song is fiendishly woven into the film’s identity, making Ms. Lewton’s death more horrifying. The audience hears the wistful country ballad playing in the background while Alex scrambles around the house leaving all kinds of biometric evidence. It also throws the good vibes in the finale off-center, dragging back that feeling of impending doom.

The film closes with a cover of Laura Nyro’s “And When I Die,” a song that provides an ironic counterpoint to everything that came before. However, as a former anxious, death-obsessed teenager, it’s the usage of Nine Inch Nails’ “Into The Void” that intrigues me most. With a lack of imagination, it’s easy to scoff at the probability of some executive taking a look at 1999’s Modern Rock Chart on Billboard, picking out the song that explicitly croons the movie’s title, and calling it a day. But its inclusion resonates beyond the incidental.

“Into The Void” plays diegetically from Carter’s stereo only once as he runs the hapless Billy Hitchcock (Sean William Scott) off the road. His resentment is solely focused on Alex, who he takes every opportunity to confront. “Pictures in my head of the final destination” is perfectly audible in this scene, serving as a taunting reminder that each survivor is on borrowed time. What’s curious about the song’s perspective, however, is that it looks inward. Reading it as a piece of solipsistic writing, the message is one of despair. It works both as moody ambiance and a soundtrack to Carter’s volatile headspace. “Into the Void” revisits themes from Nine Inch Nails’ previous record The Downward Spiral.

As one of the more pop-oriented tracks off of The Fragile, “Into the Void” retains all the funk of the rhythm section in “Closer” while eschewing its cries for mercy. And its lyrics build to an intense refrain similar to “The Becoming.” The former’s “it won’t give up, it wants me dead/Goddamn this noise inside my head” feeds the crushing realization of “Tried to save myself but my self keeps slipping away.”

There is a visceral element to Carter questioning his own mortality that actively works against Alex’s more calculated interpretation. The scene where Carter recklessly pushes himself and the others to their limit encapsulates the absurdity of the film’s plot. If the group decides to take their own lives, so what? If you’re gonna go, why not run your car into a train than wait to be offed by a cracked mug full of vodka and an unfortunately placed set of kitchen knives?

Sticking with the Nightmare analogy, Kerr Smith’s version of Rod Lane is just as scared and confused. But he is given more agency to explore his gripe with death. That Carter also watches his girlfriend die unceremoniously isn’t the only source of his baggage. Amanda Detmer’s Terr has somewhat of a thankless role in the film. Despite being one of the only people who does not have a violent reaction towards Alex, Terry becomes a morbid punchline alluding to one of horror’s most imitated jumpscares: the Lewton bus. Much like her French teacher, Terry’s death is a gag that pushes the film past the border of good taste.

Both scenes helped to establish a series tradition of slapstick demise. Final Destination relishes in the harshness of every character’s death like its sequels. But it also makes the point that each person is fated to the same end, if by different means. Their reluctance to coalesce feels like a byproduct of growing up in a disjointed community. And like Reznor’s noisy and tonally intricate The Fragile, intrusive thoughts surrounding death and its ripple effects are firmly established in the film. “Into the Void” might play like a throwaway track. Yet its pessimistic sensibilities align with the concerns of the group of misfit survivors.

All told, Final Destination’s balance of dark humor and malaise is a sincere effort to channel those special teen years where you feel like everything is trying its damndest to kill you. I admire where its heart is at. It isn’t “funny” to think about the weight of every obligation, heartache and trauma of being that age. But watching a sweaty kid try to map out a structure for problems beyond his control alongside a smitten, orphaned alt girl is incredibly entertaining. Truthfully, I never want anything bad to happen to these characters. I always hold my breath at Tod’s scene and I giggle uncontrollably when Stifler gets domed.

This is a film that will always elicit a reaction from me, no matter how many dozens of times I turn it on. Much like Final Destination is a comfort film, The Fragile is a comfort album. “Into the Void” specifically has a music video featuring the NIN guys throwing shit at each other while singing about being on the absolute edge. I’d be lying if I said I don’t feel like shaking ass every time it comes on my playlist rotation. Both pieces of media approach death and its destructive capabilities. They also both let you laugh and dance through it all.