Terror on the Turntable: Step Into the Light of Jerry Goldsmith’s Classic Poltergeist Score 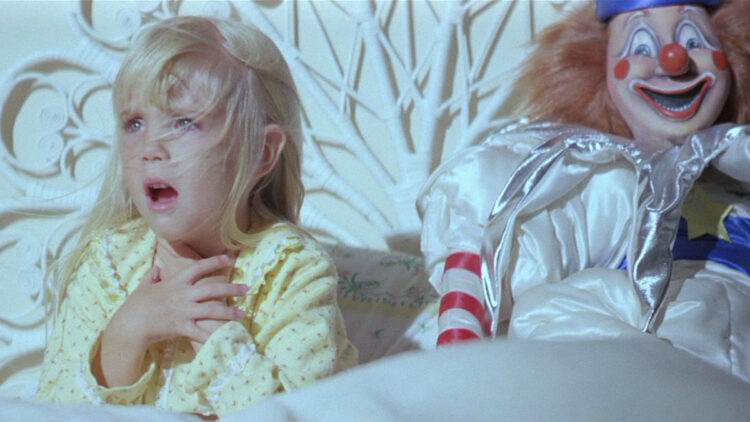 Welcome to Terror on the Turntable! In this monthly column, join Rachel Reeves as she explores the powerful and unholy alliance that exists between horror films and their scores. Covering only scores that have been released on vinyl, it’s a conversation about the intersection of music theory, composer style, film history, and the art of deep listening. So, light the candles, put on your headphones, and get ready to drop that needle. The sacred ritual of listening to music on wax is about to begin.

Ray Bradbury describes October as a “rare month” in his book Something Wicked This Way Comes. As the carefree warmth of summer begins to fade, barbecues are replaced with bonfires. Swimsuits and shorts are swapped for hoodies and sweaters. And just as the leaves begin to fall and float down the sidewalk with a haunting autonomy, the spooky and scary begin to emerge from their dark recesses to galavant and mingle with the mainstream—a rare and beautiful month indeed.

Despite the fact that many of us horror fans embrace a Halloween-365 life, it is this special time of year that often provides a rejuvenating and celebratory injection of creepiness and fandom fervor. More than just an excuse to buy boatloads of candy, October inspires many genre fans to embark on extensive movie marathons and to revisit old favorites. Like a blanket fresh out of the dryer, there’s something about the old familiar go-to’s that hit differently in October. While the list of universally accepted “Horror Classics” is long (and subjective) there is one that never fails to make the cut: Poltergeist.

Produced by Steven Spielberg and directed by Tobe Hooper (yes, you read that correctly), Poltergeist is a film that beautifully manages to balance heartfelt sentiment, humor, scares, and nuanced complexities with ease. While the classic haunted house puzzle pieces are all there, it is truly how these pieces are assembled and executed that makes Poltergeist an inarguable classic. More than a just woeful tale of an endearing family unit plagued by restless spirits and shady real estate practices, Poltergeist is a masterclass in storytelling from every conceivable angle. As a case and point to this argument, I offer up the film’s incredible score by Jerry Goldsmith.

Now, it’s no secret that Poltergeist’s drama is not simply contained to the Freeling household; it also had its fair share of issues behind the camera as well. Contractually unable to direct another film while working on E.T. the Extra-Terrestrial, Spielberg still couldn’t say no when the Poltergeist project he was toying with became greenlit. Rather than push the project back, Spielberg decided to take on the role of producer. He then officially hired Tobe Hooper to handle directing duties. However, just because Hooper was directing did not mean that Spielberg simply sat back in his chair. While Hooper was indeed involved with making a lot of creative decisions on Poltergeist, Spielberg’s fingerprints are inarguably present all over the final product.

The easily detectable scent of Spielberg only intensified when Jerry Goldsmith came on as the film’s composer. When he first listened to Goldsmith’s Academy Award-winning score for The Omen, he was immediately struck by Goldsmith’s obvious talent and knack for sonic storytelling. Despite being an outspoken fan of Goldsmith’s work, Spielberg’s professional love affair with John Williams always tended to take precedence when it came to hiring a composer. However, because of the unusual situation, John Williams was already tied up with E.T. Finally, the perfect opportunity had presented itself for Spielberg and Goldsmith to join forces.

For Goldsmith, the desire to work together was mutual. Even though many of Spielberg’s heavy-hitter films were yet to come, it was quite evident at this time that Spielberg was an A-list filmmaker on the brink of complete and utter Hollywood domination. It didn’t even really matter that Spielberg wasn’t actually directing Poltergeist, Goldsmith knew that the Spielberg name (and budget) made the project one worth tackling. Also, Spielberg was a very involved creator with lots of opinions related to music. Goldsmith was assured that it would in fact be Spielberg with whom he would be collaborating, not Hooper.

As a composer, Goldsmith brought a unique skill set to the metaphorical table. While an expert at executing emotionally evocative orchestral passages, he was also artfully adept at integrating them with avant-garde, atonal and experimental ideas. By blending elements and cleverly manipulating the culturally embedded associations with particular tonal palettes, Goldsmith injected each film he worked on with a subtle, yet powerful emotional subtext. This fusion of elements can historically be seen in well-known projects like Alien, The Omen, Star Trek: The Motion Picture, and Logan’s Run. But, Poltergeist offered Goldsmith the opportunity to showcase this talent in a much more grounded way.

Wasting absolutely no time exhibiting this idea, Poltergeist opens with Goldsmith’s version of ‘The Star-Spangled Banner.’ More than just a way to integrate the classic late-night TV station sign-off, this musical choice lays an immediate and strong foundation for the film to build on. An instantly recognizable cultural touchstone, this particular patriotic tune conjures up propaganda-worthy images of American suburban life, progress, family, and ingrained cultural values. Without even saying a word about the Freeling family, the use of this song instantly conveys the idea that what will unfold in the next 90 minutes could happen anywhere, to anyone. Perhaps, even you.

Next, as E.Buzz the dog makes his nightly rounds and checks on young Carol Anne, the very first bit of notable score arrives. With the track titled ‘The Calling,’ a descending Shepard’s Tone, alternating woodwinds, and ethereal strings accompany her attraction to the static playing on the TV. Not only does this attach a particular amount of significance to Carol Anne, but the melodic progression also retains a crucial amount of ambiguousness. Leading neither definitively up nor down, the music effectively leaves The TV People’s motivations unclear while conveying Carol Anne’s curious (versus scared) emotional state.

Related: POLTERGEIST is Getting Another Remake, Russo Brothers to Helm

As her conversation with The TV People officially begins, it is then that Carol Anne’s own theme enters the musical picture. ‘Carol Anne’s Theme,’ an extremely important piece of the Poltergeist puzzle, is presented in a myriad of ways throughout the film. Achingly sweet and dripping with sentiment, it is truly a picture-perfect melody for an SCU (Spielberg Cinematic Universe) film. Whether performed by a choir, a music box, a solo flute, or a small cluster of strings, it is always executed in a way that relays a youthful ambiance.

Working in tandem with the instrumentation, the lullaby-like rhythm and major key sound further works to sonically harness the idea of pure innocence. Then, once Carol Anne becomes abducted, Goldsmith is able to instantly raise the emotional stakes by seamlessly and strategically inserting the melody into darker musical moments. Even when Carol Anne is visually absent from the story, it is her melody that reaches through the screen to squeeze even the blackest hearts, just a little.

However, don’t let Goldsmith’s sweet side fool you. Even though he can capture nostalgia and tenderness with one hand tied behind his back, he can also bring the spooky factor. And in Poltergeist, he absolutely does. In the standout tracks ‘Rebirth,’ ‘Escape from Suburbia’ and ‘Night of the Beast’ Goldsmith uses every inch of the orchestra to maximize the auditory possibilities. A masterclass in composition, elements of bitonality, chromatic triads, arpeggios, and modulation explore the dark underbelly of the Cuesta Verde community. Effortlessly transitioning from one orchestral section to the next, Goldsmith creates a beautifully strategic and chaotic conversation between the dueling dangers holding Carol Anne hostage.

Surprisingly, despite being well-known for his use of electronic and synth elements, not a single one is used here. Using only acoustic instruments like cymbals, musical saws, whistles, rub rods, and drums (despite some being played in less than traditional ways), the music for Poltergeist retains an innate warmth that subconsciously roots in reality. Rather than relying on electronic sounds to create an eerie feel, it is the use of these traditional elements that further reinforces the fact that the spirits have an Earthly versus otherworldly connection. And for the super nerds out there, Goldsmith even sneaks in a few nods to the Gregorian ‘Dies Irae’ Chant. Also known as the ‘Mass for the Dead,’ it is a (very) subtle melodic Easter Egg that directly connects to the Freelings’ supernatural problem.

For all these reasons and more, Goldsmith’s Poltergeist score has become a certifiable, undeniable, stone-cold classic. Although ultimately beaten out by John Williams and his E.T. score at the 1983 Academy Awards, we as horror fans know not to put that much stock in such things. In an era where horror scores (still) get stereotyped as noisy, unsettling collisions of sounds intent on ‘jamming your frequencies’ in an effort to set up jumpscares, Poltergeist stands as a direct counter.

More than just an emotional support system, Goldsmith’s music adds complex layers of subtext and character information, all while keeping a consistent pace of evolution and dynamism. So now, during this most sacred and spooky time of year I urge you, step into the light. Whether on vinyl, blu-ray, or HBO Max, press play and let the marvelous musical glow of Goldsmith wash over you. Whether you listen for the first time or with seasoned ears, Goldsmith is the listening experience that simply keeps on giving.

Originally released on vinyl by MGM Records in 1982, it would be a criminally long time until Mondo finally did the Dark Lord’s work and reissued the score in 2013. A notoriously noisy and problematic release (dare we say, cursed?), let’s keep those fingers crossed for another quality release in the future, shall we? While both are available, if you’re in the market to add this record to your collection, stick to the original copy. Odds are there’s one haunting the racks at a record store near you.