‘You Won’t Be Alone’ Is Gorgeous, Plodding Folk Horror [Sundance 2022]

Read Chad Collins' review of 'You Won't Be Alone' from Sundance 2022. 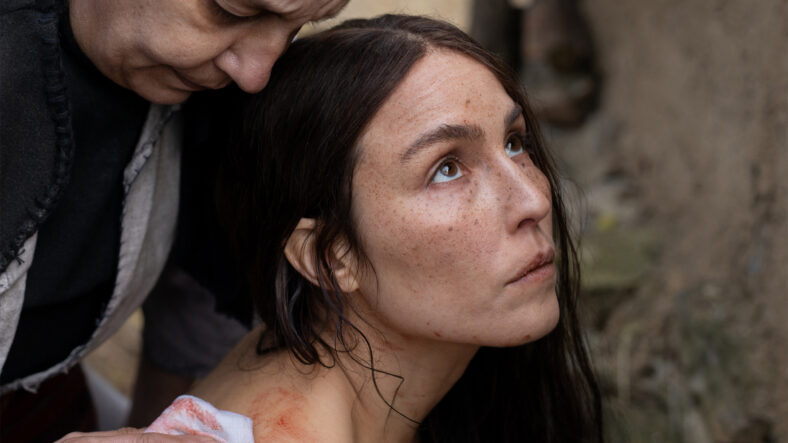 If there’s been a consistent theme among genre properties at this year’s Sundance Film Festival, it’s been mood. Speak No Evil is gravely uncomfortable while Watcher is perniciously disquieting. Narrative and conceit still persist, including in sure-to-be-breakout Fresh, but among the slate of high-profile premieres (even Master), mood takes precedence. Such is the case with writer/director Goran Stolevski’s You Won’t Be Alone. Though often, this mood is to the detriment of a consistently engaging, provocative experience.

In an isolated, craggy village in 19th-century Macedonia, an old witch (Annamaria Marinca) intrudes upon the home of a young woman, eager to steal her baby away. Hushed tones and a twinkling soundtrack unfurl a bargain. Years later, the witch returns, takes Nevena (Sara Klimoska at the time), transforms her, then casts her out. Now feral, Nevena begins to quite literally borrow the skin of others, a kind of occult Under the Skin in more ways than just conceit.

Familiar genre faces flesh out the cast, including Noomi Rapace, Alice Englert, Carloto Cotta, and Sara Klimoska as borrowed bodies for Nevena. For as talented as the bunch are, they’re merely vessels for poignant, only occasionally dispersible dialogue. The different bodies are thematic, macrocosmic gateways into the minutiae of humanity, told with swift poetry, gorgeous scenery, and non-diegetic voiceover until bodies are abandoned and new ones inhabited.

Intermittently, there’s plenty of quasi-occult talk, and even smatterings of violence, most non-confrontational. It’s violence that simply is, with no moral framework or judgment. It’s both there and in an overall concept that You Won’t Be Alone earns its horror moniker, even if it’s more akin to what might happen if Robert Eggers directed The Tree of Life. Indeed, the horror moniker itself is most appropriate, even if some will feel compelled to qualify You Won’t Be Alone as arthouse, elevated, or any other number of aggravatingly abstract terms.

In all, You Won’t Be Alone is about humanity, what it means to transcend the human form and survey life in all its distinct pleasures. Motherhood, fatherhood, childhood, and everything in between. In those moments it lands, You Won’t Be Alone is deeply affecting, a swirling supernova of sensuality and the innate pleasures of life. At times, the horror elements subside, and You Won’t Be Alone is both enchanting and poignant, enough to draw tears from the sheer majesty of the beauty Goran Stolevski has constructed.

For as much beauty as there is, however, there is bleakness, most notably the enduringly plaintive thread that runs throughout. Though Nevena experiences a lot, she is without grounding, a tone augmented by composer Mark Bradshaw’s score. You Won’t Be Alone is a lot of things, though for as piercing as its deep-POV is, the audience, like Nevena, is left floating aimlessly Destined to prove more successful with some audiences than others, You Won’t Be Alone still warrants a look, if only for the sheer artistry on display. It’s a folk horror fable with a poetic periphery,. What it lacks in narrative tension, it compensates for with humanistic grandeur.

Melding folk horror and metaphysical meditation, You Won’t Be Alone is a curious, often uncompromising, foray into the meaning of life, though it doesn’t always get there successfully.