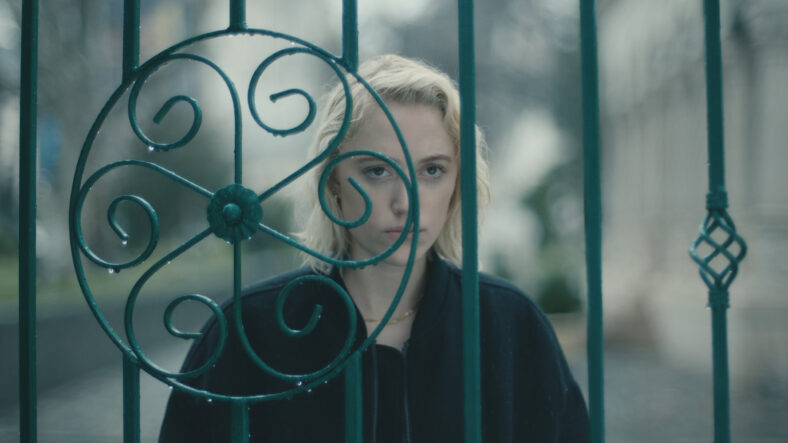 Maika Monroe is an outsider in Chloe Okuno’s sensational, bone-chilling Watcher. Her Julia, like so many young women, exists on the periphery. Having just moved to the Romanian capital of Bucharest with her husband, Francis (Karl Glusman), her early days are spent in isolation. Julia is a Transylvanian vampire, only truly going out at night when her husband returns home from work. In the intermittent period, Julia is an object, a distinctly feminine one displayed in a museum of Neo-Classical, Romanian Revival architecture. Framed by twisted flutings and glazed ceramics, she exists to be commodified. She exists to be watched. That is, of course, until she subverts the male gaze, sufficiently galvanized to watch back.

Julia doesn’t speak Romanian, and Okuno adroitly exploits Julia’s otherness. Her core existence is predicated on others, mostly men, translating foreign words and assisting her in navigating unfamiliar neighborhoods. Shortly after moving in, a man in an adjacent building is seen watching. His face is gauzy and nondescript, the face of a ghost, as he stares down into her new apartment, watching and waiting. Early allusions to both Eyes of a Stranger and Someone’s Watching Me abound, successfully contextualizing Watcher in the current pantheon of women-in-peril horror hybrids. Okuno crafts Watcher around Julia’s deep, almost oppressive point-of-view– she is centered in every scene. The suffocating isolation of a foreign land, the tenuous tether to her Francis, her only lifeline, compels. Monroe excels at viscerally sharing her experience.

Related: ‘See for Me’ is Tense, Unpredictable, and Features Great Characters

Watcher is austere and cold, told in hushed tones and muted whispers, a narrative technique that slowly unties the tension. Julia’s stalker, soon suspected to be an unnamed neighbor (Burn Gorman), is curiously, almost supernaturally present. He follows her through the grocery stores. In one truly spine-chilling scene, seated right behind her at a matinee showing of Charade. Curiously, the horror elements are most pronounced in the opening of the third act. Both Julia and the audience suspect she’s being stalked, a circumstance rendered more terrifying on account of “The Spider,” an alleged serial killer stalking and beheading women in Bucharest.

Where Watcher falters ever so slightly is in its second act. The introduction of Irina (Madalina Anea), Julia’s neighbor and friend, elevates the pacing some. Anea is truly Watcher’s most valuable player, manifesting an early Giallo charm in her performance. But Watcher eschews its foundational horror for a conventional foray into incredulity. Naturally, no one–not even Francis– believes Julia.

Yet for as grounded as Watcher had been thus far, the internality of Julia’s plight feels less personal and more cinematic. In all, it’s a convenient plot device to thrust her further into danger. Monroe works wonders to sell the mounting tension. Though her paranoia rings true—men too often don’t believe women—it isn’t explored with the same care or artistry the rest of Watcher had so successfully accomplished. The mounting tension with Francis and dissolution of their relationship feels hollow and non-descript, necessary narrative beats in a movie that didn’t need them.

Related: ‘Knocking’ Is A Terrifying Look at the Horrors of Mental Illness

Yet, Watcher assuredly finds its footing and, for patient viewers, rewards them with a thoroughly terrifying third act. Violence and gore are calculated, and Okuno’s less-is-more approach is almost cinema-verité. At times, it feels not like a movie, but sequences culled from real-life crime. There are images in Watcher that made me wince, so shocking and sudden in appearance, they were almost nauseating. That is Watcher’s greatest strength. The deliberate pacing and escalating tension will make it difficult for Watcher to be the next breakout horror hit. But I can say with confidence that it is one of Sundance’s scariest premieres. Watcher is coldly, mutedly terrifying. Expertly crafted and chillingly conceived, it’s bound to scare the hell out of its audience.

Watcher is a vividly realized and expertly bone-chilling paranoid thriller.