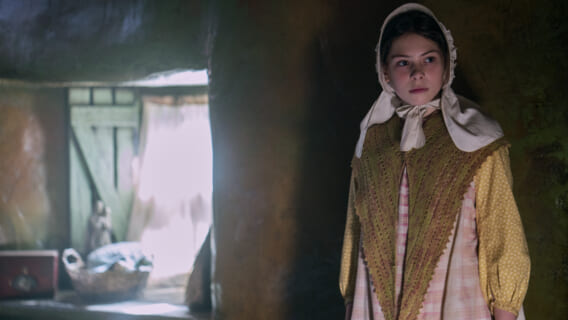 The Wonder has been on the top thriller on Netflix’s Top 10 List for two weeks now. This is very impressive for a movie with no press to kill it on the streaming charts. It’s currently resting comfortably at number 3 on this week’s Netflix Top 10 English Language Films.

The movie appeared out of nowhere last week and landed in the Top 10 as effortlessly as Miss Flo works a red carpet. Most of us discovered the movie via Twitter, as everyone was praising Pugh’s performance and recommending it.

While Twitter has been praising Florence Pugh for yet another standout performance, Twitter is also starting to highlight how gorgeous the movie is.

Cinematographer Ari Wegner specifically is receiving a lot of praise for the beautiful shots of the film that are currently making the rounds.

Read the full synopsis via Netflix:

1862, 13 years after the Great Famine. An English Nightingale Nurse Lib Wright (Pugh) is called to the Irish Midlands by a devout community to conduct a 15-day examination over one of their own. Anna O’Donnell (Kíla Lord Cassidy) is an 11-year-old girl who claims not to have eaten for four months, surviving miraculously on “manna from heaven”. As Anna’s health rapidly deteriorates, Lib is determined to unearth the truth, challenging the faith of a community that would prefer to stay believing.

Also Read: Get An Exclusive Look at the ‘T Blockers’ Poster, The Latest Film From Trans Filmmaker Alice Maio Mackay

The Wonder is directed by Sebastián Lelio. Written by Emma Donoghue, Sebastián Lelio, and Alice Birch. Based on the book written by Donoghue. It stars Florence Pugh, Tom Burke, and Kíla Lord Cassidy.

Let me know if you have checked out The Wonder at @misssharai. I’m dying to know what you think about this gorgeous movie taking the charts by storm.