Get An Exclusive Look at the ‘T Blockers’ Poster, The Latest Film From Trans Filmmaker Alice Maio Mackay 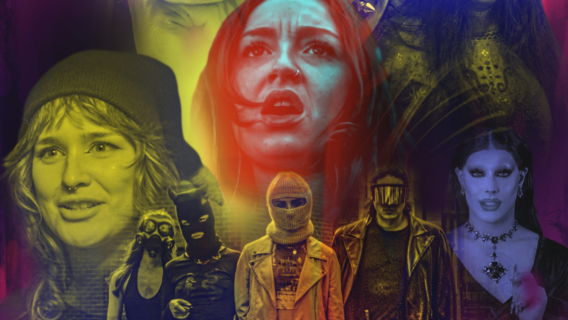 Alice Maio Mackay is a horror force to be reckoned with. The Australian 17-year-old filmmaker has already made two features, So Vam and Bad Girl Boogey, with both featuring almost exclusively queer and trans talent both in front of and behind the camera. With an unabashedly queer point of view, Mackay is changing the way we think about the horror genre. And she shows no sign of stopping, with the upcoming release of her third feature film T Blockers.

When ancient parasites that thrive on hatred rise from beneath a small town, taking the most fearful and susceptible as hosts, a young trans filmmaker struggling to transition in increasingly hostile times for LGBTQ+ people, finds herself the only one who can sense the possessed, and rally the resistance before the horror escapes and spreads.

Dread Central is excited to exclusively reveal the poster art for T Blockers, designed by the ever-talented Creepy Duck Design. You’ve seen their work on posters for films such as Hellraiser (2022), Scream (2022), and V/H/S/99.

Check out some exclusive photos from the film below:

No release date is set yet for T Blockers. But keep checking back to Dread Central for more information as we have it!