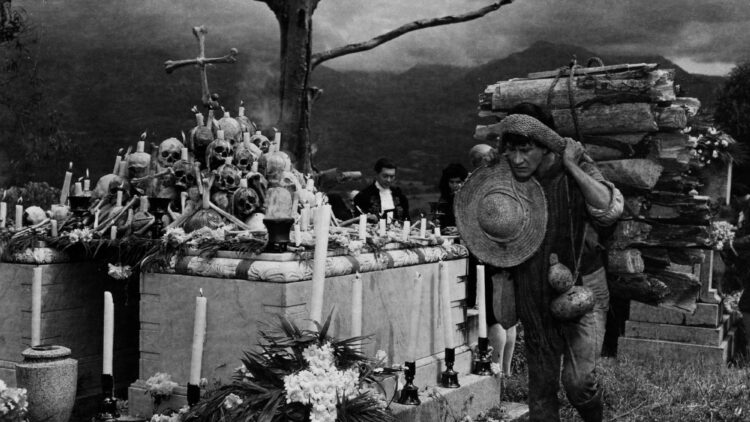 Welcome to Horror En Español, a monthly column where Mikey P. takes you through the world of Latin American and Spanish horror cinema. For this installment, Mikey introduces us to the 1960 Mexican horror film, Macario.

Macario, written and directed by Roberto Gavaldón, is a film where all of its influences come alive to tell a cinematic story filled with macabre imagery. The use of Día de Los Muertos during 18th-century colonial Mexico in the first half of the film set the tone and the atmosphere. Death is always near. It’s in all the sugar skulls, parade decorations, ofrendas, and, to Macario (Ignacio López Tarso), a personified version of Death.

As Macario starves and struggles to make ends meet for his family by selling wood to local shops and bakeries, the smell of grilled turkeys is just a sniff away. Macario salivates as the steaming turkeys make their way to their respective ofrendas by the servants who are taking them. An immediate urge emerges within Macario; he must eat a whole turkey to himself. With help from his wife, Macario sneaks off to indulge in this act.

Before digging in, the personified versions of God, the Devil, and Death stand before him. Breaking his own rules of not sharing with anyone, Macario decides to split his turkey with Death. This small and kind gesture leads to Death filling Macario’s canteen with magical water. It aids the ill with just a drop, as long as Death doesn’t show up at the head of the sick. Macario agrees and is left to play God as the world around him changes.

With the film being set on Dia de Los Muertos, the themes surrounding death make sense. The holiday is mixed with Indigenous rituals and Spanish religious imagery. It’s hard not to think about the colonization and assimilation that transpired in order to reach colonial Mexico which is referred to as “New Spain”. Macario covers a few layers corresponding with the power of the church and the exploitation of the Indigenous people.

The Subtle Villainous Framing of the Church

The framing of the church is set up in a tricky manner. The church isn’t overtly displayed as the villains of the story. But the director does tiptoe around its influence over colonial Mexico and the integration of their politics with the Indigenous people of the country. The opening image of Macario is of the exterior walls of a church while a written explanation is on screen explaining the importance of Dia de Los Muertos. Throughout the film, there are plenty of beautiful shots set up by one of the best Mexican cinematographers, Gabriel Figeroura, where the church has a looming presence. For example, at the beginning of the film, while Macario exits a building in the daylight, a church can be seen dwarfing him. This sets up the authority and power that the Church is given by the colonizers, which foreshadows the final act of the film.

Just like many Golden Age of Mexican Cinema films, Macario’s story comes with a lesson. As Macario begins to heal the sick within his village, the rich and the powerful start to get wind of what is happening. Macario begins to be seen as a savior which quickly gives him money to open his own practice in a rags-to-riches narrative. Upon helping a rich man’s wife, the man turns into Macario’s manager and helps him grow. But for a profit of course.

Related: The Cycle of Misogynistic Aggression in ‘Tombs of the Blind Dead’

The more famous and rich Macario becomes from his practice, the more enemies and friends are beginning to talk. While some call Macario a miraculous healer, others turn to call him a witch. The Church steps in once the gossip of Macario’s healing abilities reaches their officials. Considered a threat, they try their best to stop a force they have no knowledge of. This is done by officers sent to search Macario’s medical office. They tear the office apart and smash all the vials Macario has left. It’s important to note, while the officers are destroying the office, religious imagery hangs on the walls, watching every action be committed.

To the Church, Macario is no longer a resource in the capitalist town. As he can no longer be of service to the economy, his unknown ability is now a threat. Instead of being fearful of an Indigenous Mexican, the Church instills fear. Macario is captured and put under a test. Macario is to point out which of all the sick people in a room will die, if Macario fails he is to be set on trial for his witch accusations.

This parallels the European conquest when first coming in contact with the Indigenous tribes of the Americas. Instead of trying to understand the people and their ways, fear was instilled by marking the Indians as savages and cannibals. According to Gabriel Eljaiek-Rodriguez from his book The Migration and Politics of Monsters in Latin America, the image of cannibals surfaced around the 16th and 17th centuries. This instilled fear is a practice brought down through the centuries, which the director subtly points out. The integration of the Spanish rule over the Mexican people weaves in nicely with the major theme of the film: the delicate nature of life.

The climax of the film is one of the most powerful and impressive scenes I’ve seen from this era of film. As Macario’s life turns for the better by being able to capitalize off of Death’s turkey repayment, Macario comes to a crossroads. To save himself from the clutches of the Church, Macario interferes with Death’s plan on taking the child from a powerful Spaniard who was willing to help Macario if the child survived.

Macario escapes from the grasps of the Spaniards and runs into the surrounding forest after the altercation. To find shelter and survive the chase, Macario enters a cave that unknowingly belongs to Death. Upon entering, the camera slowly pans to the abyss of the cave which is covered in glowing candles. Knowing how Macario feels about life, Death decides to give him a closer look at what is currently transpiring. Death picks up a dwindling candle that’s close to its end and says,  “Look at this. A life. Look at how fragile, how precious this is.” This is Death’s explanation of not only the candle but as a representation of the fragility of life. The delicacy of life is shown through a perfect metaphor. Death handles the candle with fragile hands.

Even though Death is in charge of all the life in the world and has the ultimate power over humans, he handles them with care. This is the director showing Mexico’s intimacy with the concept of death. Death’s patience and gracefulness when protecting the candle’s fire showcase the romantic dance of Mexico’s correlation with death and Día de Los Muertos.

Mexico’s consciousness of death can be traced back to the Indigenous empires that once overtook the lands. Upon the arrival of Europeans, Mexico was invaded and beaten. Just like other countries, the vastness of death is always at the forefront of history. While some choose to fear it, Mexico embraced it.