The Cycle of Misogynistic Aggression in ‘Tombs of the Blind Dead’ 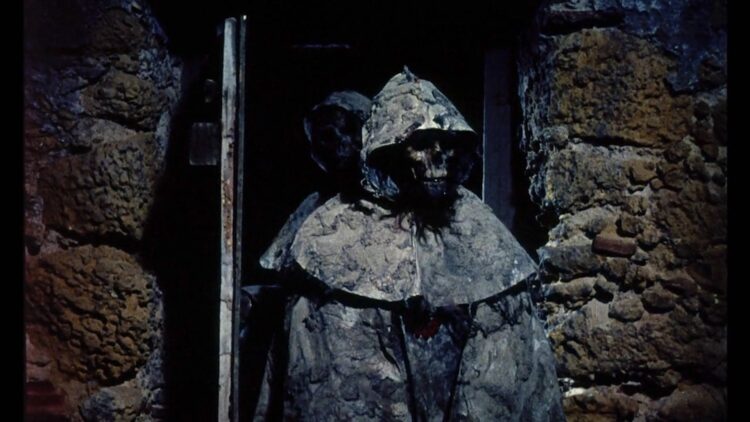 Welcome to Horror En Español, a monthly column where Mikey P. takes you through the world of Latin American and Spanish horror cinema. For this installment, Mikey introduces us to the Spanish horror film Tombs of the Blind Dead.

During the 1970s, Spain underwent many changes. It transitioned from a dictatorship to a democracy with the death of fascist leader Fransico Franco. But the political progression didn’t begin after the dictator’s death. In the first half of the decade, when fascism was still prominent in the country, the horror genre began to emerge. The first horror film to hit the big screens in Spain was in 1961 with Jesus Franco’s The Awful Dr. Olof. But it wasn’t until a decade later that the Spanish horror boom launched with Amando de Ossorio’s Tombs of the Blind Dead.

What Tombs of the Blind Dead Is All About

What makes Tombs of the Blind Dead such a stand-out piece in an already impressive surge of horror films is Ossorio’s unique monsters. At the time of the horror boom, Christopher Lee and Paul Naschy had overtaken European cinema with classic monsters such as vampires, werewolves, and mummies. Instead of following the footsteps of the European horror masters, Ossorio decided to create his own creatures: the Undead Templar Knights.

Tombs of the Blind Dead uses the Undead Templar Knights to highlight the terrible misogyny throughout Spain’s history. The film follows three Spanish friends Roger Whelan (Cesar Burner), Betty Turner (Lone Fleming), and Virginia White (Maria Elena Arpón). While vacationing in an expensive Spanish resort, the three decide to continue their getaway outside of the confines of the resort. As they make their way to Portugal, only accessible by train, personal problems begin to arise with the trio. This is where we get the setup of Betty’s and Virginia’s past relationship and the catalyst of the narrative. Virginia, who’s mad at the flirtatious banter between Betty and Roger, jumps off the train and heads towards an isolated village. Little does she know this is the resting place of the Undead Templar Knights. These creatures attack and kill Virginia. It’s then up to Betty and Roger to unveil the murderers.

Who Are The Undead Templar Knights?

At the midpoint of the film, we get our first piece of exposition surrounding the Undead Templar Knights. The folklore of these creatures changes throughout the course of the four films of the ensuing franchise (Tombs of the Blind Dead, Attack of the Blind Dead, The Ghost Galleon, and Night of the Seagulls). Although there are many inconsistencies between each origin fable, there is one constant factor in the flashbacks. The Undead Templar Knights are derived from 11th-century Crusaders. Each film accounts for their origins through a misogynistic attack. The flashbacks consist of men in their Crusaders attire looming over a woman as she is tied up, hurt and bleeding. A part of the immortal process involves the drinking of the Maiden’s (Carmen Yazalde) blood. All the Undead Templar Knights surround her and drink the victim’s blood like mortal vampires.

Ossorio makes it a point to mimic the aggression of men throughout the centuries in one film. In the last act of the film, Betty and Roger team up with Pedro Candal (Jose Thelman) and Nina (Veronica Llimera) to scout the isolated village at night. During the overnight search party, Roger walks away with Nina. Pedro forces Betty to go with him to check the opposite end of the village. In a drastic tonal shift, Pedro pounces on Betty and has his way with her. This sexual assault mimics the sacrificial ritual towards the Maiden performed by The Undead Templar Knights. In this graphic and uncomfortable scene, Ossorio spends most of the time with Pedro on top sucking on Betty’s skin. Pedro, a figurative vampire who takes away the power of women, is no different than the Undead Templar Knights and their search for immortality.

A Bit Of History

Tombs of the Blind Dead was written and filmed during Franco’s regime, which adds another layer of oppression and misogyny. Ossorio had to team up with a Portuguese studio in order to finish and distribute the film. This was due to the censors put in place by Franco and enforced by the Church.

Writer Jesús Navarro Carrión is strictly credited on IMDB for dialogue. He assisted in creating power behind some throw-away lines. After Virginia’s body is found, a coroner explicitly states, “this would have never happened if she wasn’t dressed like that.” The outfit choices between Virginia and Betty aren’t entirely different. After hearing this line expressed by a respectable professional, paired with Betty’s assault, that mentality used to diminish women is only emphasized.

Another instance of the Church’s power by trying to impose its ideals is the subplot of going against non-heterosexual relationships. The exposition scene of Betty’s and Virginia’s relationship can be viewed as coming from the male gaze akin to Jesus Franco’s Vampyros Lesbos. But Ossorio uses his monsters as an allegory to critique how the Church silences these types of relationships. This could be why Virginia is the first to meet her fate by these rotting creatures of traditional morals. The fact that the Undead Templar Knights continue to chase Betty throughout the final act again showcases their intent to silence these women.

The Undead Templar Knights originated during the time Catholicism was sweeping the nation. Anyone against these ideals was quickly silenced. This, on top of early 1970s Spain’s politics, shows how the Church had its hold over the Spanish with Franco’s permission.

Ossorio portrays the cycle of man’s aggression towards women with his first and final scene. The film begins with shots of a ruined temple and a fantastic score filled with hymns and eerie music. This sets the ominous tone. In a quick-cut jump scare, we see the hand of a cadaver and a woman in torn clothing releasing a guttural yell. The film then begins its narrative. There’s no context behind the yell. One could be thinking this was one of the weakest cold openings horror has to offer. It isn’t until the end of the movie that the cold open makes sense.

During the climax, the Undead Templar Knights follow Betty onto the train. Chaos and murder ensue as the undead monsters wreak havoc and begin their bloodshed. The young, the old and everyone in between is a victim. No one is safe from these Catholic ideal-holding creatures. Betty believes she is safe, but once again she is confronted by the Undead Templar Knights. Her final guttural yell is the exact same scene from the beginning of the movie. The infinite cycle continues.

When a country is filled with oppression, the people experiencing it eventually grow tired of the politics and the policies involved. The surge of horror films after Franco’s death showcases this. Ossorio may have lost his footing with the entirety of the Blind Dead series. The final two entries don’t recapture the charm of the earlier films. Maybe it’s because they don’t reflect the fascist hold Spain was once in. But Tombs of the Blind Dead is still an important part of Spanish horror cinema. The film not only critiques Spain’s politics and its history, but it entertains in the process.