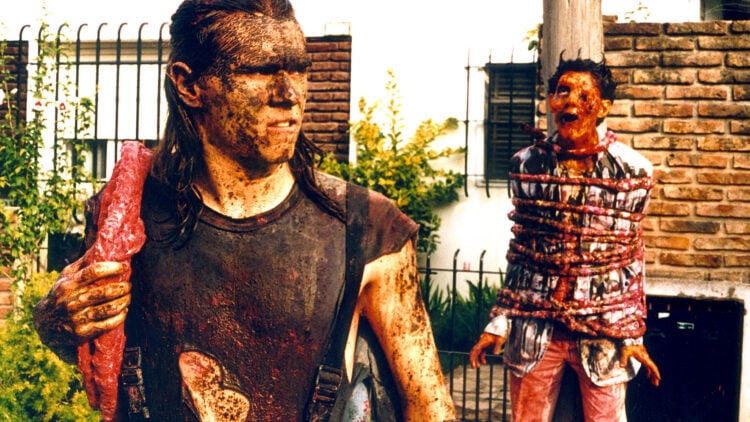 Welcome to Horror En Español, a monthly column where Mikey P. takes you through the world of Latin American and Spanish horror cinema. For this first installment, Mikey introduces us to the Argentinian zombie classic, Plaga Zombie.

When it comes to Latin American horror, Mexico and Argentina are the two heaviest hitters. Mexico’s horror run has been steady since the early 1930s. Argentina, on the other hand, was hit with an explosion of horror films at the turn of the century. Argentinian horror fans soon had an array of films to follow and enjoy starting with the first and only zombie trilogy in all of Latin American cinema for over twenty years known as the Plaga Zombie series.

Pablo Parés and Hernán Sáez’s 1997 film Plaga Zombie can be credited with many things, especially sparking the fire of contemporary Argentinian horror. With this film, these Argentine filmmakers demonstrated that assistance wasn’t needed from INCAA (Argentina’s National Institute of Cinema and Audiovisual Arts). For them, the lack of a huge budget shouldn’t stop you from making a movie. Plaga Zombie generated the aesthetic of Punk Cinema in Argentina, a term coined by author Stacy Thompson in their book Punk Productions: Unfinished Business, which is a mentality of DIY ethos while filming with shoestring budgets. These films went against the mainstream media, particularly Argentina New Wave Cinema. More importantly, Plaga Zombie showed that a labor of love can lead to something great. In this case, creating a massive cult following, to the point where Fangoria Films International acquired the rights to the first two films.

Right off the bat, Plaga Zombie gives us a fresh take on the zombie subgenre. The film begins with a cold opening of, at first glance, what is the initial zombie outbreak. But the zombies terrorizing Argentina are a different species entirely. They’re actually invading aliens masked in rotting bodies. This is why their instinct to kill isn’t primal; the zombies don’t kill to feed. Instead, they’re smart as they wait and intimidate followed by the pleasure to kill.

Within the first act it becomes known that as extraterrestrials plan to dominate the world, they release a virus to turn the people of Argentina, and then the world, into zombies. What the aliens and zombies didn’t plan for was the alliance of an unlikely trio. Doctor Bill (Pablo Parés), who is currently struggling with the guilt of an accident; Wrestler John West (Berta Muñiz), who is told his cowboy wrestling persona is old news; and finally, Max (Hernán Saéz) who prefers to be home in his comfort zone. The three join forces to defeat the foreign threat within their city in Argentina.

The entire story of Plaga Zombie is a trilogy that spans three days in the film. But in real life, the production took over two decades. The sequels (Plaga Zombie: Zona Mutante and Plaga Zombie: Revolucion Toxica) are told at a greater scale and with a greater budget as the story evolves. The budget for the first entry in the Plaga Zombie series wasn’t the concern of the filmmakers. Their initial budget of $450 shows, but this started an insurgence of low-budget horror production companies such as Farsa Productions, responsible for Plaga Zombie, and GoreInvasion Productions. From there, directors such as Mexican director Adrián García Bogliano used the style of punk filmmaking in Argentinian-set films that further ignited the storm of shoestring budgets.

But the filmmakers behind Plaga Zombie aren’t just trendsetters. A lot of Pablo Parés and Hernán Sáez’s influences pour through the camera lens. The character John West marks the Mexican 60s horror influence by mixing together genre filmmaking with wrestling. Not only is West portrayed as heroic, but his character is considered to be of traditional views and values just like the Mexican-wrestler-turned-actor, El Santo. In the midst of the climactic battle, West wrestles a zombie just like El Santo would fight the villains in his films. On top of that, El Santo’s first full feature is El Santo Vs The Zombies, which brings his influence on this film full circle.

Themes within zombie films come with an array of different metaphors and allegories. These often slow, sometimes fast, rotting corpses can symbolize consumerism, racism, and other cultural issues. In Plaga Zombies’ case, the filmmakers’ initial intention is to create a love letter to the genre. But it’s hard to ignore the extrinsic factors that come into play. The film comments on the expanding nature of urbanization within the country. Argentina is considered one of the highest urbanized countries in the world. As the country progresses and the population grows, the land’s surface area remains the same. A sense of claustrophobia emerges as the suburban homes become more cramped.

The close proximity of the film’s direction seconds this. Within multiple shots inside the main location, a suburban home, the walls become suffocating barriers. This, paired with the use of camera angles, creates an overwhelming sense of claustrophobia. Some shots follow the code of the early greats like Sam Raimi’s Evil Dead. Facial close-ups appear on the screen as anxiety, confusion, terror, and anger spill from the characters and onto the viewer.

Related: Enter a Theater of Terror! New Trailer and Poster for THE LAST MATINEE

Almost the entire film is shot within the confines of a single home, with the exception of a few scenes involving the streets and the climactic battle taking place in the backyard. The only clear shots of the background involve the suburban houses under attack. Argentina’s major cities are nothing but a glimpse in one scene in the sequel Plaga Zombie: Zona Mutante. Other than that, the attacks are in the character’s literal backyard. By the time we reach the final act in Plaga Zombie: Zona Mutante, the setting switches to the outskirts which resemble the slums of Argentina which are known as “villas”. The consistent reminder of urbanization runs through the three films behind every zombie attack and claustrophobic angle.

Horror fans are the loudest when it comes to showing their love for the genre. Their expressions come in many forms. Fans write about these films, they make homemade merchandise, some make their own movies, the list goes on. In the vein of early American horror filmmakers such as George Romero and his creation of the living dead cannibals in Night of the Living Dead, these Argentine filmmakers followed their passion for horror and wanted to follow the independent production trend.

As a result, horror cinema in Argentina became more recognized by INCAA. With this recognition, genre films were more easily granted distribution rights and allowed to be played at major cinema chains. This led to INCAA allowing aid to other Latin American countries such as Uruguay’s The Last Matinee. Plaga Zombie is a physical product of love for the genre. Pablo Parés and Hernán Sáez are the pioneers in contemporary Argentinian horror. Their passion continues to influence others in Latin America and the rest of the world.