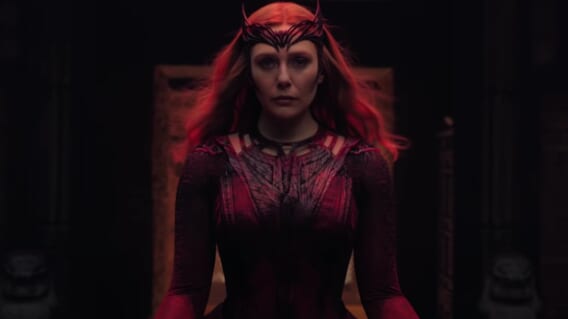 Doctor Strange in the Multiverse of Madness just hit Disney+! The Sam Raimi-directed film marks a departure from the rest of the MCU. It’s a PG-13 attempt at horror that pits two of the most powerful Avengers against each other in a battle to the death. I’m obviously Team Wanda, but I was never a Disney kid. I figured this was a good time to dig deep and see what other creepy offerings were in their catalog and on their streamer. I hopped onto the Google Machine (a term coined by Dread’s own Girl, That’s Scary) and text my little sister to bring you five creepy movies you can watch after this highly anticipated Doctor Strange sequel.

A sophisticated businesswoman has a litter of puppies kidnapped to repurpose for a coat. I guess I never really paid attention when this was on in my youth. This is why I spent my adult years thinking it was an early version of The Devil Wears Prada. I was about to mock my sister for the suggestion when she made some sound points. She argued, “Cruella was pretty dark. She was out here trying to kill puppies to make herself a fur coat. And she tried to run someone off the road with her car!” These were all valid points and made me rethink my stance on Cruella. Have I been gatekeeping and denying her place as a delightfully evil villain I want in the genre? Probably. Give this icon her flowers and send her to the Scarlet Witch’s team.

A waitress is derailed when she’s turned into a frog. I figured the horror here is that the first Black Disney princess isn’t a princess but a waitress. Or her having to work herself to the bone because of capitalism, which is the truest evil. However, my sister feels differently and texts me, “She’s turned into a frog…and Dr. Facilier gets dragged to hell.”

This made me realize that I might’ve been too lenient on this Doc. Was I distracted by the velvety voice of Keith David who I always root for out of habit? Or maybe it’s because I watched this three drinks in towards the top of the pandemic. Either way, after my sister burst my bubble I started to really look at these screenshots. Dr. Facilier is definitely making shady devil deals and literally wearing a hat with the universal kid sign for poison. He’s singlehandedly serving us horror for the pre-school set and I am living.

A kid doesn’t believe in the supernatural until she meets the monster under her bed. Apparently, this traumatized child is then framed by this monster lurking in her house! The images alone from this film are nightmare fuel! Also, the monster under the bed is a boogeyman that doesn’t seem like the sexy fun kind Yvie Oddly sold us on this season of Ru Paul’s Drag Race: All Stars. Disney really said, “Tell them there is a monster under their bed,” after millenniums of parents telling their kids the opposite. This is true chaos. Had I seen this in my formative years, I probably would’ve tried to be a Disney kid. Probably.

A puppet sets off on a quest to become a real boy. This is one that me, my sister, and the internet agreed on. Not only is inanimate objects wanting to become human for unclear reasons creepy. But the friends he makes along the way and situations he gets into are not kid-friendly. First off, some old dude is making wooden kids because he’s lonely. No one unpacked that?! Secondly, this wooden kid’s friend is a cricket that is also his conscience. This implies Pinocchio doesn’t have a moral compass or soul. Geppetto has bippity boppity’d a little monster and that makes me look at him and his creation in a different light. However, let us also remember the island of little boys being turned into fucking donkeys for drinking from a laced flask! Tell me this isn’t an A24 movie before A24 was founded!

Dorothy tells her family about her wonderful adventure in Oz and they ship her to a psychiatric institution. She narrowly avoids electroshock therapy and then returns to a more sinister version of Oz. Dorothy (played by Fairuza Balk in one of her first roles) has been through it. First off, sending kids to get electrocuted for telling their truth seems extreme. Secondly, this version of Oz feels like a “This is your brain on acid” PSA that I’m still too young to see. I watched this unhinged version of Oz and have so many questions. It made my brain melt and I am not okay. The photo I chose with the headless woman talking to Dorothy is one of the least wild ass images I could find. Think about that. Let that sink in. Then hit play because this is true Disney horror!

Let me know what Disney attempts at horror I should check out at misssharai.