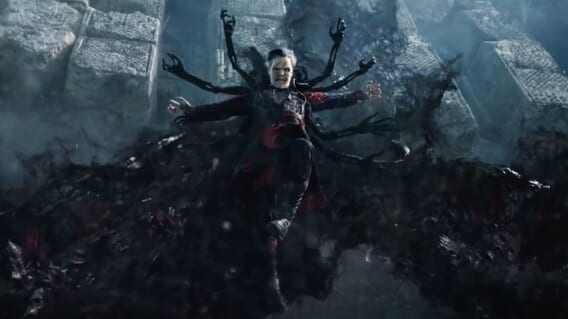 Film news is somewhat fickle. Resultantly, it can be difficult to determine what topic is going to dominate digital feeds for a weekend. The recent release of Sam Raimi’s Doctor Strange in the Multiverse of Madness came with the expected refreshed topics. Raimi’s Spider-Man trilogy is a masterpiece. Drag Me to Hell remains Raimi’s best output in years. All that. Curiously, however, with the publication of a Variety editorial on Doctor Strange’s violence, the discourse has shifted. Now, feeds have been inundated with lengthy perspectives and off-the-cuff tweets either defending the movie’s divergent approach to Marvel carnage or decrying the MPA’s leniency toward the Marvel Cinematic Universe. I think both sides are missing the point. Whether the MPA’s rating is correct isn’t what matters here. More importantly, it’s whether children—the crux of both arguments given the MCU’s generational appeal—should be exposed to subversive, violent, challenging media. They should be.

The MPA is itself problematic. A puritanical beacon, its once meaningful goals have resulted in some pretty shaky classifications. Desperate to avoid government censorship, the film industry shifted to a horizontal model whereby they censored themselves. Movies were classified under an ever-expanding banner of ratings to broadly signal to audiences the appropriateness of the content therein. Historically more rigid in the days of the Hays Code, the current system, managed by the Classification and Rating Administration (CARA), effectively delineates movies into three categories (though there are five total ratings). Movies are either appropriate for children, possibly appropriate with discretion, or strictly for adults.

There have been considerable ebbs and flows. There’s the 1984 introduction of the PG-13 rating. Then there’s the 22-year tenure of the “X” rating, an adults-only label that didn’t mean porn despite general audiences thinking it did. American classification, too, had to grapple with its own moral majority. While Video Nasties were consigned to the United Kingdom, both NC-17 and X-rated features stateside struggled to secure advertising, theater placement, and even home video store acquisition. In effect, no one wanted to screen or carry them, considerably constraining their marketability and commercial success. This reigns true for even quasi-recent releases like Adam Green’s Hatchet 2, which enjoyed a 3-day unrated stint in AMC theaters before being pulled. It never even made its Canadian release, though. Toronto and Montreal’s provincial rating agencies obstructed its release before it even had an audience.

There are some critics who point to increased scrutiny of independent cinema. Green, for what it’s worth, isn’t necessarily wrong that 2006’s The Hills Have Eyes remake, rated R, is considerably more gruesome and dour than his own Hatchet 2. Additionally, there are those who remain confounded by the mercurial moral imperative, the likes of which will give Troy Nixey’s Don’t Be Afraid of the Dark an R-rating while slapping a more commercial PG-13 rating on The Expendables 3. Those ratings should be switched.

In fairness to the MPA, their role extends far beyond classification. They simultaneously endeavor to promote copyright protection, reduce piracy, and expand commercial access to different markets, many of which remain underserved (ask almost anyone who wanted to see Everything Everywhere All at Once at release). The viability, integrity, and history of the MPA aren’t in question, though. It’s important context, yes. There’s also little dispute that nepotism, money, and regressive ideals play some role in the kind of content deemed appropriate or not. Principally, what matters here is the consumers, namely those consumers who might point to something like Doctor Strange in the Multiverse of Madness as innately inappropriate for young audiences.

Now, I’m certainly not arguing every parent needs to go out and rent John Carpenter’s Halloween or Tom Holland’s Child’s Play for their children. Though admittedly, that’s exactly what my mom did. But it does beg the question, namely why society writ large is so opposed to challenging content for children. As a social sciences scholar, there is contentious research, often paradoxical, that both argues for and against the role of challenging content in children’s media. There is the perennial notion that violence in movies makes children violent. The word violence itself is capable of being replaced with anything parents might find objectionable (drug use, sex, profanity). Conversely, there are those who argue it might have the opposite effect. This type of media can open developing minds to the kind of critical conversations and analyses they need to responsibly consume media in the contemporary age.

Also Read: 7 Horror Films That Stretched the Boundaries of the PG-Rating

Growing up in the late 1990s and early 2000s, I can easily concede the landscape of digital media is vastly different now than it was then, a time once thought to be the apotheosis of accessibility and diverse content. After all, there were DVDs and rentals in the mail. Now, movies can be streamed on phones, computers, televisions, gaming consoles (including the Nintendo Switch), car displays, and sundry other, well, screens. Something can be watched Everything Everywhere All at Once. Less an acquiescence and more a reality check, children have unfettered access to media. Parental controls matter for naught. If they want to watch something, they’re going to.

What’s most important, at least from the perspective of both a researcher and adult whose childhood was full of challenging horror media especially, is equipping young children with the media literacy skills to not just consume, but also understand media. The violence and jolts in A Nightmare on Elm Street scared me, yes. But they also cultivated burgeoning ideals on friendship, strength, and combatting monsters.

I saw myself in the ostensible weirdos on-screen, in the challenges they faced and overcame. I developed a growing cinematic language, metatextual tools to evaluate and interrogate what I was watching and how it reflected and refracted the very real world I was living in. That isn’t to say that children’s media was incapable of doing so. But there were very real, very conspicuous content restrictions that neutered some of the efficacy. I learned more from Scream than I did The Little Mermaid, truth be told.

Kids need to be smart about media, yes. I can’t pretend to understand the current landscape from the perspective of raising a child. I can say, however, that the dialogue surrounding challenging media helped shape me into the media consumer I am today. Rather than decrying Doctor Strange in the Multiverse of Madness or any other number of questionable ratings, it seems to me more fruitful to let those undergird difficult, yet necessary, conversations. What role does the violence play? Why was it necessary, if it even was? How did it make you feel? Does blood render it the same or worse than any other number of (admittedly) violent Marvel movies?

The MPA, in its current state, will remain arbitrary. Its brushstroke classifications are never going to be reasonable metrics for what makes a movie appropriate (abstract language like The Green Inferno’s “aberrant violence and torture” rating means nothing). Instead, the onus rests on the individual consumers, and for families, on the parents. What makes the most sense to me is a slow doling out of challenging content. The kind that develops cinematic language and diverse perspectives. Michael Myers or Dr. Strange might just teach kids a thing or two.

Tags: Doctor Strange in the Multiverse of Madness MPAA