7 Horror Films That Stretched the Boundaries of the PG-Rating 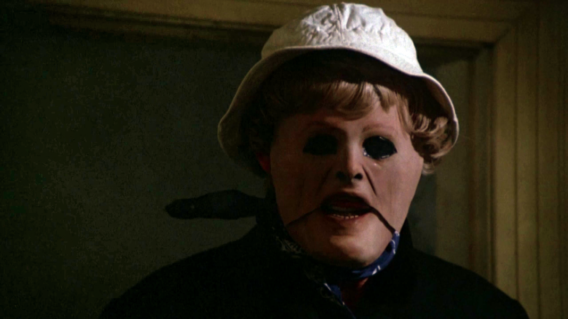 As a young child, I took great pleasure in stumbling upon the rare PG-rated horror film. That family-friendly rating classification reassured my parents that whatever I was watching couldn’t possibly be that bad. But there are at least a handful of historical examples where the MPAA allowed filmmakers far more leniency than they would today. In fact, several of the features I’m about to recall contain nudity, graphic violence, or various other forms of disreputable behavior. So, three cheers for that!

Sadly, the PG-13 rating (introduced in 1984) removed a magical grey area that found a lot of films labeled as family-friendly when they may have been a bit too intense for younger viewers. So, on that note, I am taking a look back on seven films that gloriously stretched the limits of the PG-rating classification.

The Legend of Hell House

This terrifying flick probably should have been R-rated on the basis of intensity, alone. Yet, somehow, even with harrowing sequences throughout, a visible nipple, and a scene of aggressive statue fondling, director John Hough was gifted a PG-rating. Ten-year-old me certainly isn’t complaining. But I suspect there were a few pissed-off parents that found this tale of a malevolent presence wasn’t meant for the overly impressionable.

I once interviewed Tourist Trap director David Schmoeller and he told me his original expectation was that the film would be slapped with an R-rating. And that’s a reasonable assumption. There is plenty of graphic violence and killer mannequin action contained within. Yet, somehow, this picture flew under the MPAA radar. Accordingly, the director’s takeaway was that he thought the film’s PG rating hurt ticket sales by misleading viewers into thinking the film wasn’t made for an adult audience. And that’s a shame. This surreal flick is a frighteningly good time. And I would say it packs enough thrills and chills to warrant an R-rating.

With Gremlins, Joe Dante delivered a flick that is equal parts heartwarming and horrifying. The interpersonal relationships in this picture are often touching. But the carnage caused by (and inflicted upon) the titular characters is pretty intense. We see Gremlins stabbed, blended, and microwaved. Not to mention the (wholly satisfying) fate of Mrs. Deagle who goes on a wild ride after a group of Gremlins tamper with her lift chair.

While it’s definitely too intense for young viewers, older children may just love the flick that kicked off the tiny monster craze of the ‘80s.

It’s mind-boggling that Poltergeist got away with a PG rating. One would think the face-melting sequence, the skeletons in the pool, or the clown doll scene would have been enough to push the flick to an R-rating. But director Tobe Hooper and producer Steven Spielberg were somehow able to sway the powers that be. They secured a family-friendly rating for a film that gave an entire generation nightmares.

This tale of an idyllic, suburban neighborhood built above a burial ground remains supremely scary. It also served as a gateway to horror for many young fans. So, in that respect, I am grateful the MPAA let it slide with a PG rating.

Race With the Devil

It seems strange for a film about a violent, Satanic cult to be labeled with a family-friendly PG-rating. But that’s precisely what happened with Race With the Devil. This feature sees two pairs of vacationing lovebirds on an RV excursion. It’s then promptly interrupted by the small matter of ritualistic human sacrifice.

Interestingly, many other territories gave the film a restricted classification. But in the US, the MPAA let the flick by with a PG rating.

This ‘70s creature feature does eschew violence in favor of cutaway shot at times. But that isn’t always the case. In fact, there are several instances where we see the killer baby chowing down on a human snack. And yes, the carnage is in full view.

This tale of an expecting mother that gives birth to a monster baby is probably a bit intense for younger viewers. But thanks to that PG-rating, the film likely led to plenty of budding horror enthusiasts discovering Cohen’s work (which was normally far more graphic). So, I am chalking that up in the ‘win’ column.

Jaws would never have skated by with a PG-rating today. This classic is intense as hell and sees the killer shark leaving a great deal of carnage in his wake. There are a handful of sequences depicting women in various stages of undress. And let’s not forget about the drug use. Or that horrifying raft sequence where we see the water chummed by the blood of a small child.