Sam Raimi is back with Marvel's first bonafide horror blockbuster! 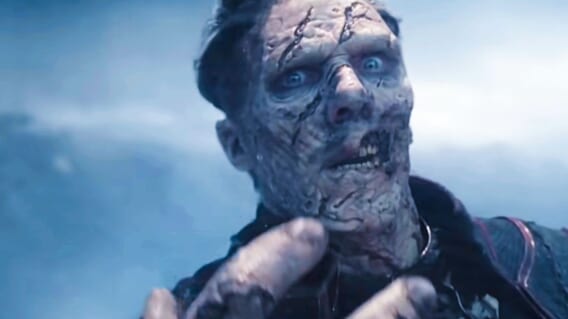 With Dr. Strange in the Multiverse of Madness, Sam Raimi has successfully navigated the Disneyfication of the multiverse and emerged with his horror cred intact. Sure, there are plenty of moments of tween-age pandering. For the most part though, the fingerprints of the mouse house aren’t found all over the latest MCU entry, due mostly to a surprisingly shocking amount of Raimi’s signature touches. Even if you’re not completely up-to-date with Phase 4 of Marvel, every horror fan should probably go out and support the beloved director’s first film in nine years.

Dealing with the aftershocks from Spider-Man: No Way Home and WandaVision, Stephen Strange (Benedict Cumberbatch) finds himself battling the one-eyed monster Gargantos (a familiar comic book foe) to help protect a teenager in peril named America Chavez (Xochitl Gomez). Strange has seen America in his dreams and learns she has the ability to travel through the multiverse, a power she can’t control. They learn that Wanda Maximoff (Elisabeth Olsen) a.k.a Scarlet Witch has sent Gargantos to kidnap America in order to use her power to reunite with her children, Billy and Tommy Maximoff, who were last seen in WandaVision. From there, Raimi’s instincts takeover to send the audience on a wildly horrific ride at breakneck speed.

Also Read: ‘Darkman’: A Movie Monster Disguised as a Superhero

The ancient spell book known as the Darkhold is another carryover from the end of WandaVision. The book grants almost unlimited power to the owner. Marvel’s Book of the Damned allows Wanda to become virtually unstoppable as the Scarlet Witch. There are obvious nods to the Necronomicon from the Evil Dead franchise and Raimi fully embraces the connection between the Darkhold and the infamous Book of the Dead.

Once Wanda discovers the Darkhold on the top of Mount Wundagore, the back half of Multiverse of Madness delves gleefully into full action-horror territory. There’s an incredibly dark possession scene where the Scarlet Witch takes over a Wanda variant that pushes the boundaries of the PG-13 rating. It’s genuinely disturbing for a family-friendly Marvel movie and shows just how much Raimi is in control of the reins this time out. The fury of Scarlet Witch is fully unleashed in some battle scenes that push the envelope for what is socially acceptable violence in a tentpole blockbuster. For horror hounds, the way Wanda disposes of a few well-placed superhero cameos is even more fun to watch than seeing their surprise introductions.

Olsen fully embraces the deadite within her. As Marvel’s greatest witch she contorts her body and claws her fingers in subtle, disturbing ways that make the character feel more dangerous and demonic. Cumberbatch also comes to play with his most fully realized version of Dr. Strange. The character of America Chavez is there to humanize Strange and ultimately works as a MacGuffin that doesn’t really have any emotional payoff. Cumberbatch throws off the unsuccessful attempt to refine Strange’s image and, instead, leans into the rare opportunity to play variants of the same character. Sinister Strange and Defender Strange both make memorable appearances that should help doubters of the character see his full potential. When Zombie Strange emerges, Cumberbatch looks like he’s living out his fantasy of appearing in Michael Jackson’s Thriller. It’s a glorious finale for Marvel fans and horror fans, alike.

The What If…? animated series on Disney+ should clue you in on some of the possibilities that these alternate worlds can play in. Raimi takes that premise and asks, what if we start with a typical, formulaic Marvel movie and turn it into an inventive horror action hybrid instead? The director of Drag Me To Hell drags us into his warped version of the multiverse. In a franchise and, frankly a concept, that’s beginning to feel overdone, Raimi and Loki writer Michael Waldron breathe new life into a dead corpse.

Sam Raimi returns to the superhero genre with a surprisingly dark vision of the multiverse that should probably go down as the most expensive horror movie ever made.