The director of 'Lake Bodom' is back with a mostly effective folk horror tale. 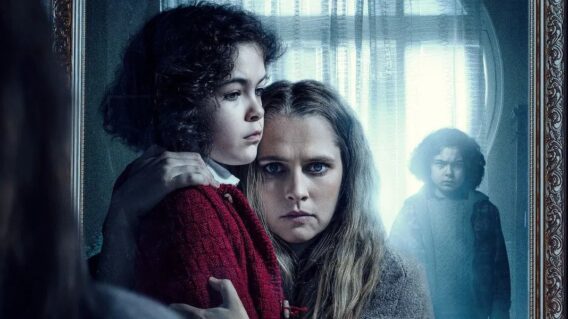 No family should ever have to deal with the profound loss of a child. Getting over the grieving process is next to impossible. Harder still, imagine if that child has an identical twin that inescapably becomes a constant reminder of that unfathomable tragedy. It’s enough to split a family apart and drive a mother mad. That’s the starting point for The Twin, director Taneli Mustonen’s English-language debut.

Mustonen first made waves with the fantastic Finnish horror film Lake Bodom based on the unsolved murders of a group of teenage campers way back in 1960. With The Twin, elements of the creepy kid subgenre we all know and love collide with some tenets of folklore to explore questions about faith, mental health, and sacrifice.

In an attempt to bury the past and start over, Rachel (Teresa Palmer) and husband Anthony (Steven Cree) move with their surviving son Elliot (Tristan Ruggeri) to a remote town in the Scandinavian countryside. Elliot seems well adjusted enough until he makes a wish on a strange, sacrificial rock that the family discovers on a rafting trip down the river. The rock serves as a connection to an indigenous culture whose beliefs have passed down to the tweed-obsessed elderly members of the adjacent township. Elliot’s wish to bring his brother Nathan back from the beyond awakens an entity lovingly referred to as the eternal incubus.

Not surprisingly, Rachel is the first to notice Elliot’s strange behavior when he suddenly claims that he is now the embodiment of Nathan, causing her to question her own sanity. After all, Rachel’s husband certainly doesn’t believe her and she becomes increasingly volatile in highly public fits of rage. The classic trope of a gaslit woman appearing crazy is absolutely on full display through the first act. The supernatural reveal later in the film proves that Rachel may not, in fact, be moving from a stage of grief into a state of mental decay. Maybe she’s right, after all.

Once the townspeople enter in, The Twin transitions into more folk horror territory with obvious nods to Rosemary’s Baby. Talk of sacrificial offerings and resurrections begin to permeate through the idyllic pastoral locale until the woods suddenly turn ominous and threatening. In a shocking twist (not really), Anthony and the townspeople conspire together in a devilish plan, forcing Rachel to race into the finale in full maternal heroine mode.

Admittedly, it takes time for The Twin to find its footing. Once it does, there’s an effective level of intrigue that Mustonen uses to craft just enough atmosphere to make the final twist worth waiting for. Unfortunately, there isn’t enough time spent on that revelation to be all that convincing. The dual performance from Tristan Ruggeri as Elliot and Nathan is compelling to a point, although it eventually falls into melodramatic moments that undermine the surprise ending.

Early on, an eccentric old woman befriends Rachel, telling her that Elliot’s wish-fulfillment really happened. The woman whispers a dire prediction about the resurrection of the eternal incubus. “We ignore him and he wins,” she warns. Rachel is ignored and dismissed again and again until she chooses to confront the impending horror on the horizon to protect her children. She finds out the truth, in the process. The real truth, however, is more horrible than she imagined even though it ultimately helps her to mourn and find peace.

The Twin is an eerie new entry into the creepy kid horror subgenre that doesn’t quite stick the landing.