Bitch Ass is poised to be the next big slasher killer. 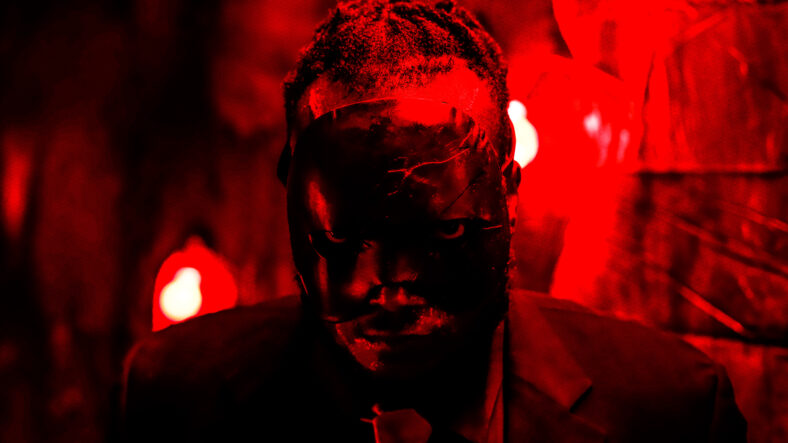 The film begins with a gang initiation where new members are told to break into the house of Cecil (​​Tunde Laleye), the neighborhood recluse. Little do they know Cecil is out for revenge and transforms into Bitch Ass, a puzzle-loving serial killer who slaughters slowly and cruelly. But, these aren’t mindless killings. They’re purposeful and thought out, not the work of a killer on a rampage. He’s methodical like Jigsaw.

Flashbacks show how young Cecil (​​Jarvis Denman Jr.) was bullied as a kid and abused by his mother. He was ridiculed by everyone except for one young woman, Marisa. But even their friendship couldn’t save Cecil. Now, his high school bullies run a local gang, and Marisa (Me’lisa Sellers) is mother to Q (Teon Kelley), a teenager secretly joining the gang to raise money for college. Cecil is getting his revenge on those who made his life living hell. Posley makes sure to never fully endorse Cecil’s violence. Instead, he creates a complicated figure who is vaguely empathetic if only to create a more nuanced horror monster.

Bitch Ass’s costume design is simple yet effective. According to Tony Todd in the film’s introduction, Bitch Ass is “the first Black serial killer to don a mask,” putting him in the league of those like Michael Myers of Halloween or Ghostface of Scream. But his mask is even more simple, half a black mask covering the top of his face. Think Phantom of the Opera but with a little more coverage. He wears a simple suit and yet that simplicity is key to creating this unsettling feeling of menace.

Plus, his puzzle room is full of tortuous contraptions to put his victims through the most pain possible. They’re challenged to board games like Operation and Battleship but with a deadly twist. They pull no punches with the gore, though production value is uneven. Bitch Ass tries to hide its low budget, but in some of its more ambitious set pieces, the seams start to appear.

The budget for Bitch Ass also shows through weaker performances from some of the characters. While Laleye creates a creepy villain, his portrayal of Cecil’s pre-murder spree feels a bit forced. Many of the performances do. But that doesn’t prevent Posley from still creating a great group of characters to emulate horror classics like The People Under the Stairs and Tales From The Hood.

Bitch Ass has cult film potential with it pushing the limits of its budget to create something gross, darkly comedic, and just overall a good time. Heavy on the homage, Posley looks to the past to create something new yet comfortable, recognizable yet exciting. Hopefully, there’s more to come from Bitch Ass between Posley’s direction and Laleye’s menacing portrayal. Fingers crossed.

A low budget doesn’t stop Bill Posley from creating the next big slasher villain with complex motivations and disgusting methods of torture.