‘The Mean One’ Steals All the Christmas Cheer [Review] 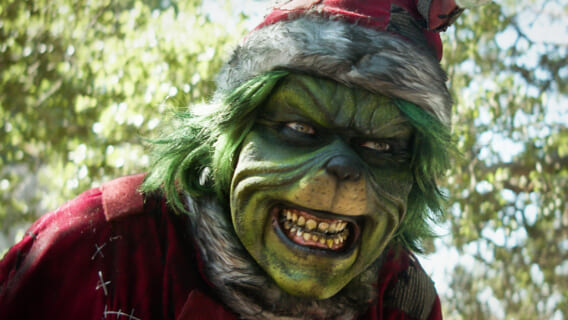 It feels almost Grinch-like to want to rag on Steven LaMorte’s The Mean One, a self-described audacious (and unauthorized) slasher adaption of, well, Dr. Seuss’ “How The Grinch Stole Christmas.” Every Christmas season, there’s a bevy of new holiday slashers. While The Mean One isn’t a contemporary of the likes of Violent Night, there are others such as Rhys Frake-Waterfield’s The Killing Tree against which this is ably judged. Unfortunately, The Mean One falls short. It stumbles down the chimney like a hobbled Grinch, ready to steal Christmas with more of a whimper, less of a fierce, festive bang.

Opening with some establishing shots with Christopher Sanders’ overlaid narration, rhymed with a distinct cadence to avoid copyright infringement, The Mean One arrives at Cindy No Surname’s (Saphina Chanadet) house. As David Howard Thornton’s (Terrifier 2) Mean One steals Christmas, Cindy’s act of kindness changes his heart. Only, that doesn’t really happen. The film rewinds, recounting how Cindy’s mother found the Gri… Mean One, presumed him to be some sick intruder, and set about beating him mercilessly over the head with a giant nutcracker. He kills her and Cindy declares the Mean One a monster, birthing evil in the process.

Years later, Cindy (Krystle Martin) returns home with her father. She intends to overcome the trauma of watching her mother die at the hands of a merry monster. Yet, everyone presumes some errant drifter committed the crime, discounting Cindy’s steadfast contention that it was a green beast. Tragedy strikes again shortly after she arrives home, however. With the help of hunky deputy Burke (Chase Mullins), Cindy must grapple with burgeoning small-town romance and IP monsters in equal measure.

In theory, The Mean One seems tailor-made for a Saturday night, B-movie bonanza. Only, it is inexplicably resistant to actually being one. It vacillates between Hallmark earnestness and slasher antics with inconsistent results. The attempts at humor, including poorly considered antisemitic jabs, never land. Even the inclusion of David Howard Thornton does little to elevate the proceedings. Thornton is simply playing Art the Clown again, with the titular Mean One never doing more with its distinct physicality beyond waving a little before each kill. He emits some kind of computer-generated, guttural growl like a dinosaur, too. Make of that what you will.

It doesn’t help that the slaughter framing is so discordant and blurry, it’s impossible to make out what’s going on. Kills, an almost requisite component of this kind of cinema, fall flat. Often, the camera cuts away as Thornton lays into his victims, blobs of conspicuously digital blood coating the screen. It looks terrible. The Mean One is poorly lit and awkwardly staged. A narrative contrivance of the Mean One being drawn to Christmas cheer strips the movie of any meaningful holiday iconography. Outside a protracted finale where Cindy channels her inner Laurie Strode, there are few lights, strands of garland, or Christmas trees at all. Instead, expect plenty of nondescript interiors and dimly lit mountainside caves.

The Mean One was no doubt a blast to film, and to give credit where credit is due, the conceit isn’t a bad one. Principally, however, it simply feels rushed, an opportunity to capitalize on the IP horror zeitgeist several years too soon. With the proper licensing, The Mean One might be better titled and, ultimately, better realized. In its present state, it’s a lump of coal, a movie that’s all concept, no substance. Horror-loving hearts are liable to shrink three sizes by the time the credits roll.