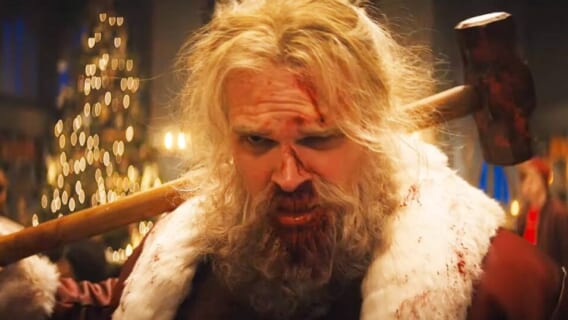 I had high hopes going into Violent Night. Sometimes building a film up in one’s mind can prove to be a recipe for disaster. But I can safely say I was not disappointed on any level. This may not be your typical Christmas feature. But it is absolutely my kind of holiday film. And I know it will be on regular rotation in my household during the month of December for years to come. Hell, I think it may just be the best Christmas film since Die Hard.

Violent Night follows the ultra-wealthy Lightstone family as they hunker down for a decadent holiday filled with excess. Much to their surprise, a group of thieves led by a man that calls himself Mr. Scrooge (John Leguizamo of Spawn) arrive at the family estate with designs on raiding the onsite vault and walking away with a large payday. The greedy grifters have planned for every possible variable except for one. It seems they did not anticipate crossing paths with old Saint Nick (David Harbour of Stranger Things). As fate would have it, the jolly man in red is a centuries-old Viking with killer instincts and a bag full of coal for those unlucky enough to find themselves on his naughty list.

Also See: ‘Violent Night’ Trailer – David Harbour Is Seeing Red As a Santa With Violence On His Mind

Well, there you have it. Does that sound like your cup of tea? I’m sure that Violent Night won’t be for everyone. In fact, I’m fairly certain its irreverence toward Christmas is bound to ruffle the feathers of the Million Mom March. But this film wasn’t made for those lacking a sense of humor or anyone averse to the macabre. However, if the intersection of Die Hard and Silent Night, Deadly Night piques your curiosity, this flick is bound to be right up your alley.

What makes Violent Night such fun is the fact that the film plays fast and loose with our collective vision of Saint Nick. Even Silent Night, Deadly Night didn’t dare feature the actual Santa Claus dispensing vigilante justice. But Violent Night has no such hang-ups. It depicts the character much differently than we’re used to seeing but still maintains a modicum of his selfless nature. That proves to be a winning combination because we get to see the big guy kicking ass, chugging beer, and rattling off one-liners. But we also see glimpses of his humanity and altruism, reminding us why Saint Nick is such a revered mythical figure. Harbour’s performance serves to endear the character to viewers while looking plenty comfortable kicking some serious ass.

In addition to delivering an unorthodox take on Kris Kringle, Violent Night also serves up plenty of dark comedy. It’s chock-full of black humor and naughty jokes. In one memorable scene, Santa Claus tells the youngest member of the Lightstone clan not to swear lest she should end up on the naughty list. The details of that exchange are funny enough on their own. But the 15 seconds of negotiation regarding appropriate wording that follow had me in stitches. And it also opens the door to a great callback that transpires later on.

Making the dark nature of the subject matter even more enjoyable is the film’s gleeful approach to violence. Santa Claus makes efficient use of a number of found objects. Everything from a candy cane to a baby Jesus from a nativity scene serves as implements of destruction. And there is no shortage of stage blood being shed. But that’s no surprise when stopping to consider the film was helmed by none other than Tommy Wirkola. If the name doesn’t ring a bell, Wirkola directed Dead Snow and its 2014 sequel. This time around, he brings a similar brand of dark humor and edgy visuals to Violent Night that are likely to make it irresistible to the right audience.

My final plea is to say: Please go see Violent Night. Often, it seems that studios are afraid to meld the holiday season with ultra-violence. And that makes sense. Christmas is looked upon as something of a sacred holiday that mustn’t be trifled with. But as a bona fide heathen, I went bananas for this film. And I think Dread Central readers may have a similar reaction. However, if we don’t show up and vote with our box office dollars, we may not get another big-budget theatrical release of this particular ilk.

This action-packed effort is as irreverent as it is endearing.