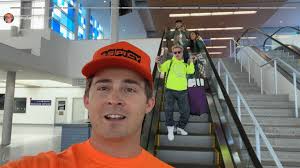 #Chadgetstheaxe follows four social media influencers live-streaming their trip to Devil’s Manor, the former home of a Satanic Cult. Things do not go well. And as the violence ramps up… so do the views.

When I realized this was a found footage movie, I kinda rolled my eyes. We’ve had so many found footage movies recently about awful influencers that I have no desire to see. Luckily, this was nothing like the other movies that divided the internet. I’m so damn happy I have to eat crow. #Chadgetstheaxe was a good time and is possibly one of my favorite movies of the year.

Our Chad, (played by Spencer Harrison Levin) is the influencer we love to hate. The viewers watching the live stream give us more information about him to help us feel confident in knowing that he’s the worst via the comments they leave on this stream. After watching commenters drag him for his bright hoodie and wish nothing but the worst for him. we start to side with them. We can’t help but also start to wonder if he deserves to get the axe. This film doesn’t make Chad wildly problematic for an entire film and then give him an unearned redemption arc. Instead, the movie reminds us who he is until the very end. This allows the movie to focus on fun and scares, and it does both exceedingly well and gives the audience a movie that’s a good time instead of more Twitter discourse.

Rounding out the cast are Michael Bonini, Taneisha Figueroa, and Cameron Vitosh who play Steve, Jennifer, and Spencer, respectively. They’re three influencers with smaller followings but bigger moral compasses than Chad. Michael has been pranked by Chad before and is trying to prove himself while growing his following. Jennifer and Spencer are a couple whose followers seem more interested in trying to date them than their haunted house shenanigans. Watching these kids decide if internet fame is worth the danger in real time adds a layer of anxiety and character development that is quite surprising. All four of the leads have an understanding of their characters that makes them a joy to follow and makes me selfishly want them to do more genre films. The film is told via all four main characters’ iPhones, and hearing how actors had to receive camera notes in addition to acting notes makes you respect these performances even more.

A thing that set this movie apart from other influencer films of this moment is an understanding of the culture. We know all four of these archetypes and have thoughts about them, and #Chadgetstheaxe uses that to its advantage. Another thing that makes it stand out is that it’s a horror-comedy that never shies away from the terrifying or the funny. You can be mid-cackle and see something that makes your heart start racing. Watching it with an audience was awesome because someone would scream while some of us were laughing. The rewatch value is high for this movie, and I am aggressively staring at streamers hoping someone snatches it soon.

Also Read: ‘Treehouse of Horror Presents: Not It’ is Why We Love ‘The Simpsons’ [Review]

#Chadgetstheaxe should not work. On paper, it sounds like a lot of the found footage movies about hated influencers we’re getting at the moment. However, it is a wickedly smart, funny, and scary film that avoids the pitfalls of the films that came out before it. It’s a solid script, with an awesome cast, that knows its lane, and that is so damn refreshing after the movies that wanted to do something similar.

Let me know if you checked out the world premiere  #Chadgetstheaxe at FilmQuest @misssharai.

#Chadgetstheaxe is a pleasant surprise. It’s a scary, funny, smart wild ride that is a hell of a good time. It’s the kind of found footage movie that reminds us there is still so much more to do in this subgenre.