‘Treehouse of Horror Presents: Not It’ is Why We Love ‘The Simpsons’ [Review] 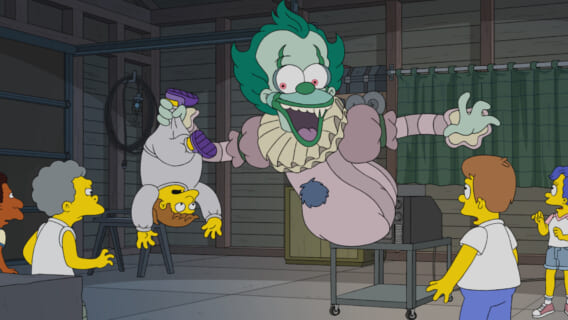 The Treehouse of Horror annual tradition has become something of a Halloween staple, just like carving pumpkins or stuffing your belly with chocolates and candy. This year, The Simpsons are double dipping, offering a parody of It featuring the always hilarious Krusty the clown. Then, the official Treehouse of Horror episode parodying the anime series Death Note airs this Sunday, October 30th on Fox. Officially, the new Treehouse of Horror XXXIII marks an incredible run of specials dating back to 1990.

Since then, the special horror episodes have moved far beyond their original parody of EC Comics to encompass every aspect of horror pop culture. That being said, it’s surprising that with all the Stephen King references over the decades, creator Matt Groening and his writing team waited this long to do a parody of King’s biggest hit. There have been references, to be sure, but never a full fledged standalone episode dedicated to Pennywise. (No spoilers, but rest assured, there is not a giant pregnant spider at the end.)

Told in two parts (of course), ‘Treehouse of Horror Presents: Not It’ goes back in time 27 years to find Homer, Marge, Moe and Carl in their own iteration of the Losers Club. They’re dorks. And Krusto the clown is beginning to terrorize the town of Kingwood (a fictional Springwood). A young Barney Grumble follows his newspaper boat down into the sewer where Krusto, naturally, rips his arm off, inevitably inhibiting his ability to drink multiple pints of beer in the future.

There’s no escaping Krusto the Clown!

The kid versions of the characters we know and love battle Krusto to the best of their…abilities. When they’re not hanging in the clubhouse, Homer develops a secret crush on Marge, Comic Book Guy doesn’t approve, and Moe somehow still has grey hair as a teenager. In a fairly amusing send-up of how the real Losers Club defeated Pennywise in Stephen King’s novel, a desperate Krusto the clown starts to literally kill himself for cheap laughs. In The Simpsons universe, it doesn’t matter if you’re an evil ancient being terrorizing a small community. After three decades of Treehouse of Horror, it should be clear that Krusty the clown and the writers are total hams that literally feed off of our amusement.

Related: ‘The Simpsons’ – Amazing Images Spoofing Stephen King’s ‘It’ Emerge From Upcoming ‘Not It’ Halloween Special

Cut to 27 years later! Not quite as long as the actual life of The Simpsons series, but close enough. Homer and Marge round up the gang and wonder if the lives of their old friends have become pathetic and sad: Moe is a rock ‘n’ roll ventriloquist (that tracks) and Carl Carlson is a brilliant astronaut. Yet, they still return to defeat Krusto in a great finale that is tailor-made and cleverly “updated for a Gen Z audience.”

When The Simpsons version of The Losers Club does confront their greatest fears again as adults, Krusto is even more powerful because, in its own words, “Adults have something much tastier than fears: Anxiety.” That kind of profound sentiment is what still makes these Treehouse of Horror segments so popular and why a parody of It is so perfect for The Simpsons after so many years.

We’ve all grown up with this show and we still treasure the moments of brilliance it still manages to churn out. More than any other animated show, Treehouse of Horror has become a staple of Halloween and a beloved annual tradition that we hope never goes away.

Treehouse of Horror Presents: Not It continues the annual Halloween tradition of spoofing the classics horror fans love while still, somehow, reminding us that The Simpsons are still relevant, even if it’s just once a year.

Share:
Tags: It Stephen King The Simpsons Treehouse of Horror