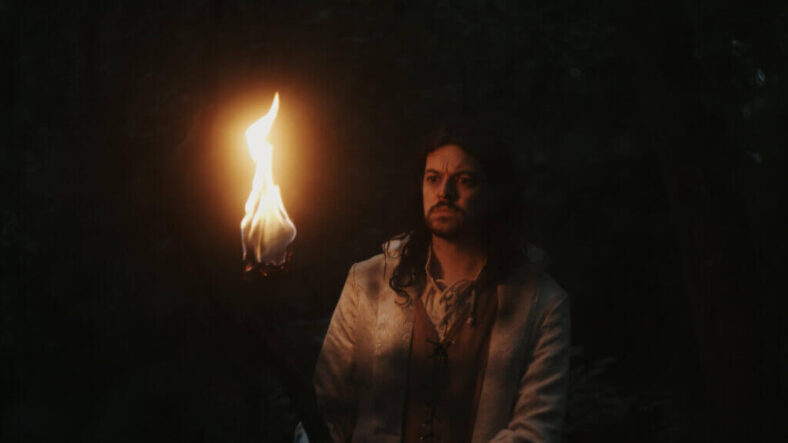 Back in 1612, a total of twelve women who lived in the area around Pendle Hill in Lancashire, England, were found guilty of witchcraft and sentenced to death. Director Richard John Taylor based his latest film, The Haunting of Pendle Hill, around this infamous piece of English history. He certainly does not shy away from presenting the more horrendous aspects of the Pendle witch trials, while also creating a damn good horror film along the way.

Lowri Watts-Joyce stars as Matilda, a young American woman who travels to England to investigate the mysterious disappearance of her father, who was researching the Pendle witch trials. Accompanied by Arthur (played by Jeffrey Charles Richards), an aging professor with a tendency to quote classic literature, Matilda searches the area around Pendle Hill in order to locate her missing father. Along the way, she makes some horrendous discoveries. Interspersed throughout the narrative were scenes taking place in the 1600s, depicting one of the witch hunters from the era named Roger Nowell (played by Noel Brendan Mcalley) as he encounters a mysterious presence in a secluded forest.

Also Read: Boy Harsher’s ‘The Runner’ Is a Terrifying Darkwave Music Video With a New Horror Icon at Its Core

While it only features a relatively small cast of characters, Taylor still manages to keep us invested in Matilda’s efforts to find her father. He depicts her as a bold and determined young woman who desperately wants to protect her family, even though we gradually learn that her father often neglected her and her mother before his disappearance. Likewise, Watts-Joyce’s performance helps to sell Matilda as a likeable and believable character. The way in which she bluntly admits to getting drunk as a way to cope with the horrors she witnesses throughout the film will certainly make Matilda seem relatable to many viewers.

Similarly, Richards is in top form as Arthur, with the character being presented as a mysterious old man who helps Matilda to understand the more mysterious ways of the world as he imparts his wisdom onto her. Throughout his time onscreen, Richards recites his literary quotes with such flare and zest that you really will believe that he can hold infinity in the palm of his hand.

Perhaps the most striking aspect of The Haunting of Pendle Hill is how the film clearly asks the question of why the women accused of witchcraft were even feared by society in the first place, when the officials who accused and prosecuted them were clearly the ones who should have been reviled for their heinous acts. Arthur presents this topic to Matilda as a question which few dare to ask, but which clearly needs to be addressed. A scene where Arthur takes Matilda to a church so they can pray before beginning their journey reinforces the fact that religion led the innocent women from the 1600s to be persecuted in the first place. The priest appears to pity Matilda for being an atheist. But the way in which he desperately prays for her to be safe after she leaves makes us pity him.

Later on, Arthur takes Matilda to the remains of Malkin Tower and explains to her how the building’s library and all its books were burned to ashes after its occupants were accused of witchcraft. This serves as an analogy for how a lack of accessible knowledge and information can lead people to pursue superstitious beliefs instead. On the other hand, Taylor presents this question from both points of view. The period scenes taking place in the 1600s depict Nowell as a self-righteous man of God who clearly believes he is doing the right thing by protecting society from those he views as deserving of the Lord’s wrath. You won’t know whether to loathe or pity him. It’s certainly a bold decision from Taylor to present such an odious historical figure in a more sympathetic light.

Aside from a scene of a malevolent entity emerging from a cave, most of the supernatural elements in The Haunting of Pendle Hill were merely hinted at rather than being explicitly shown; Taylor clearly wanted viewers to interpret things for themselves. However, there was one particularly memorable scene where a witch in a cat mask appeared to Force choke a guy to death. Star Wars fans will no doubt be highly entertained by this. Who knew that sixteenth century witches loved Star Wars as much as modern audiences?

Taylor does a good job of keeping audiences on the edge of their seats without resorting to cheap cuts of jump scares. The sight of a witch in a cat mask walking through the woods at night is probably one of the creepiest things you’re likely to see for a while. The level of onscreen violence was also generally kept to a minimum, so that when violence is infrequently shown, it hits particularly hard. And make no mistake, while the opening credits were played against beautiful aerial footage of the area surrounding Pendle Hill, Taylor clearly utilised the isolated countryside throughout the picture to great effect, making Arthur’s warning about not going into the woods after dark seem even more palpable.

The Pendle witch trials serve as a reminder of the dangers of superstitious beliefs and the harm that can be caused from making assumptions about those who society views as being different. But Taylor successfully manages to adapt the historical accounts about a shameful period from English history into one of the most chilling witchcraft-related horror films to have been released over the last several years. If you happen to be in the mood for a deeply unsettling tale of witchcraft set to the backdrop of some beautiful English countryside, this is a film you should seek out immediately.

The Haunting of Pendle Hill took one of the most famous witch trials in English history and successfully adapted it into an intensely disturbing horror story to be relished by modern audiences.