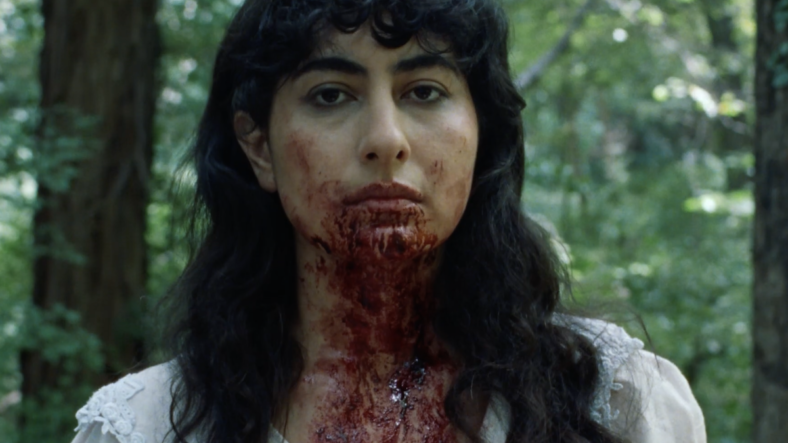 Not everyone enjoys a character study; they tend to give less resolve than most people appreciate. There’s less plot, less of a beginning, middle, and end, and more ambiance and imagery. It’s more show than tell. It doesn’t necessarily end the way you might want it to. It’s more about getting into the mind and motives of a person, figuring out what makes them tick and why it even matters in the first place. It’s for the movie buffs and the character lovers, the people who can’t help the curiosity that breeds in needing to know a person’s deepest impulses. While not everyone can get into these types of films, those who can are usually deeply rewarded for the watch. This is exactly how I felt while taking in Boy Harsher’s new film, The Runner.

A character study in the classic sense of the definition, the Shudder original movie is mainly an introduction to a messed up new horror villain. But its high style and music elements keep you engaged even with a general lack of plot. Turns out, that’s not actually a bad thing.

The Runner follows a mysterious and nomadic woman (played by Kristina Esfandiari, frontwoman of metal band King Woman) who makes murderous moves from person to random person she meets in her travels throughout the backwoods of a small, woodsy town. As the woman descends deeper and deeper into the sadistic pit of her bloody urges, darkwave duo Boy Harsher’s music underscores the horrors via music video visuals on the town’s public access channel.

The thing that really stands out with this film is exactly what makes it a character study in the first place. The music duo — vocalist Jae Matthews and producer Augustus Muller, who wrote, directed, and produced the film — do an excellent job of establishing this character and cementing her into our minds with specificity and intrigue. Further still, they don’t shy away from showing all sides of her and giving her dimension. This film very specifically refuses to tell you anything. Instead, it demands to show you, and that works so well alongside the mystery of The Runner herself (Esfandiari) and what she truly is.

The simmering lead-up to the reveal of The Runner’s true self is effective for two reasons: Boy Harsher’s pacing in their script, and Esfandiari’s performance. It’s hard to understate how effective the lead actress is at doing very little and yet still radiating a constant frequency of unease. There is something wrong with her and she knows it, but doesn’t care.

The Runner as a character may have come from the minds of the darkwave duo. But she truly becomes a fully fledged force to be feared in the hands of Esfandiari. Speaking of dimension, the singer’s wordless performance takes on another dimension of humanity in these really special moments following each kill. After she takes a life, The Runner finds the nearest telephone and dials a number she knows by heart. A man always answers on the other end, and eventually, his soft-spoken drawl implores her to come back home as she lets go, feels it all crashing down on her, and cries.

Later in the film, Matthews says that there is a “human side” to The Runner, too. It couldn’t be more obvious that that is the only thing that the character is truly scared of. The Runner stands firm alongside some of horror’s greatest villains. She is bad, bold, and unapologetically evil for reasons we don’t fully understand. But still, we empathize. With the dreadfully familiar sight of her tears — and everything they seem to mean in that instant — how could we not?

Character isn’t the only thing that stands out in this horror-music short. Boy Harsher has their aesthetics down, creating a world that feels rooted in our own but also incredibly singular and even at times dementedly dated. The whole thing felt like Twin Peaks’ unhinged cousin. The pastel maybe-1950s vibe, old television sets, rundown motor homes. Both David Lynch’s TV show and this film have similar looks and feels — and that emulation is a positive, not a negative, for The Runner. That aesthetic doesn’t exactly translate into Boy Harsher’s scenes in the same way. But those moments are also nondescript enough to fit in well with the style of The Runner’s world.

Complementing that world, the film is packed in nicely within the framework of visuals for Boy Harsher’s songs, aptly off of The Runner original soundtrack. You heard it in the synopsis, you heard it sprinkled throughout the review: this film is part movie, part music video. I tend to find efforts like this too busy. But the synthpop duo has their catchy tunes to thank for making their on-screen presence necessary. This could’ve been relegated to a soundtrack-only scenario. But Matthews and Muller are charismatic performers, and they become characters themselves within the greater story of The Runner and the spiral of her legacy.

Their choice to be in the film further broadens the world The Runner inhabits, and fleshes it out further. It not only looks and feels like our own, but operates as similarly as it can without actually bending to the same rules. The Runner, after all, is inhuman; but Matthews and Muller are not. It’s cool having them as a larger part of the story they created, and relying on them to curate the tone of the movie from an audio perspective.

All in all, The Runner is one of the best character studies I’ve seen in recent memory, and it carefully takes you down a dark and cracking path alongside a being with pure evil in its bones — but that isn’t all it is. The film is multifaceted, and it’s a must for dual music and horror lovers. From Esfandiari’s stand-out lead performance to the duo’s brooding score, the specificity of the world Boy Harsher created for The Runner to exist in is what makes films really come alive.

All in all, The Runner is one of the best character studies I’ve seen in recent memory, and it carefully takes you down a dark and cracking path alongside a being with pure evil in its bones.