This long-lost effort from the grindhouse-era is charming in spite of its flaws. 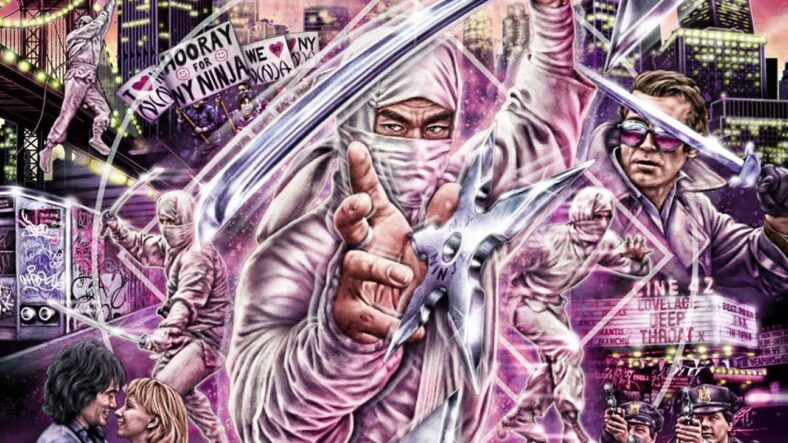 I should probably begin with a bit of context for anyone that isn’t familiar with the storied history of New York Ninja. The project was originally directed by Martial artist John Liu. Liu also wrote and starred in the film. But shortly after principal photography was completed, the footage was shelved and never completed. With the audio being lost, Kurtis Spieler (of boutique distributor Vinegar Syndrome) took on the daunting task of finishing the film. That included bringing in a new cast of voice actors to provide dialogue for the footage. Without Spieler’s tireless efforts, viewers would never have had the chance to view New York Ninja.

Although the film isn’t good in the conventional sense, its’ quite enjoyable for what it is. This flick offers up a steady supply of the kind of schlock B-movie enthusiasts go nuts over. So, if unearthing a long-lost effort from the exploitation era gets your blood pumping, I’ve got just the thing!

Following the murder of his pregnant wife, John Liu (voiced by Don “The Dragon” Wilson) takes matters into his own hands. He sets out to clean up the crime-ridden streets of New York. Much to the chagrin of the morally corrupt, the New York Ninja is on the scene and he is kicking ass and taking names!

New York Ninja reminds me a bit of the also-recently-unearthed Miami Connection; it’s full of heart but not terribly polished. New York Ninja is definitely of better quality than Miami Connection. But it’s certainly not so polished as to rise above the typical trappings of B-movie schlock.

The newly recorded voice track is surprisingly good, considering that Spieler could only make an educated guess as to what the onscreen actors were saying by reading lips. The thespians that stood in to voice the characters really lean into the campy nature of the onscreen performances. It blends beautifully with the existing footage. If the voice actors had played it straight, the dialogue would feel out of place when juxtaposed with the tone of the film.

By no stretch of the imagination is New York Ninja a good film in the typical sense. It gets a lot wrong and looks like it was made by inexperienced filmmakers. But for trash cinema enthusiasts, there is so much to love about this misguided effort.

The lineup of voice actors that assisted in the resurrection of this project should get the attention of martial arts, horror, and grindhouse enthusiasts. In addition to Wilson, the talent roster includes Michael Berryman (The Hills Have Eyes), Linnea Quigley (Night of the Demons), B-movie action legend Cynthia Rothrock (China O’Brien), and more.

Related: In The Disturbing ‘Speak No Evil’, Politeness Is Wielded Like A Weapon [Sundance 2022]

A lot of the storyline doesn’t make much sense. But that’s half the fun. I strongly suspect the original narrative was pretty flimsy because the fight sequences are the main draw and everything else seems like it was secondary. So, in a lot of cases, I get the impression that Spieler just had fun going with the ridiculous and haphazard nature of the footage. So, if you enjoy street toughs wearing jockstraps over outerwear, ninjas on roller skates, epic rat tails, industrial-strength chains worn as jewelry, masked hooligans, and aggressive backflips, I suspect you will dig this newly-unearthed relic from a bygone era.

The fact that this film has even been released is a real testament to the dedication of the devoted folks at Vinegar Syndrome. They have done much to establish themselves as the leading purveyor of the obscure and unseen.

New York Ninja is currently available on Blu-ray. So, if you’re a fan of exploitation-era martial arts cinema, this may be just what you’ve been waiting for. If you opt to check out the film, don’t hesitate to let us know your thoughts on  Facebook, Twitter, or Instagram.

New York Ninja is not for everyone but it will certainly satiate your appetite for low-budget schlock.