You need to check out this stunning release. 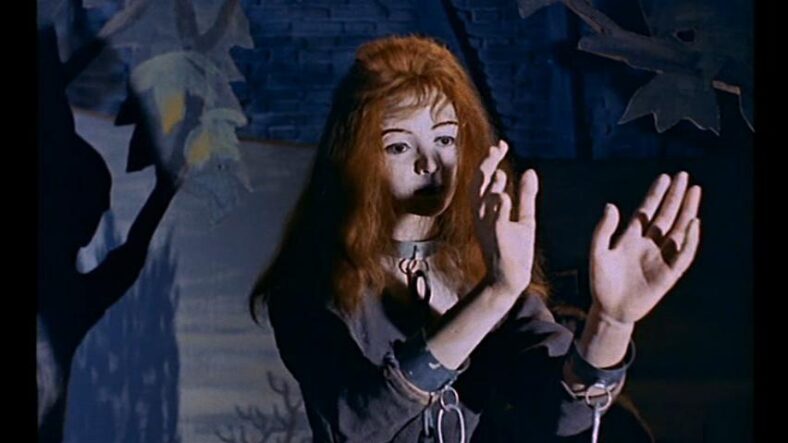 The term “Italian horror” likely conjures up images of black-gloved killers and flesh-hungry zombies. But long before Argento, Fulci, and their contemporaries produced some of the nation’s defining genre films the Italian horror film industry had to open one important door: color. It wasn’t until 1960 that Italy produced its first horror film shot in color, director Giorgio Ferroni’s Mill of the Stone Women. More closely resembling something from Hammer or Mario Bava (who is rumored to have possibly shot some of this feature) the story is drenched in Gothic atmosphere, making good use of a few genre tropes and delivering unexpectedly unsettling imagery.

Arrow Video has gone all-out in bringing this seminal film to Blu-ray. It features a whopping four cuts of the film—Italian, English export, French, and U.S—a 2K restoration from the original negative, restored audio, and a heaping helping of bonus features, all housed within a beautiful deluxe package.

Journalist Hans van Arnhim (Pierre Brice) is traveling to an isolated island in Holland to profile its most famous resident, Professor Gregorious Wahl (Herbert A.E. Böhm), creator of the famed Mill of the Stone Women, a carousel display depicting historical women in their death throes. Hans is invited to stay in the attic of the mill while he works. But his attention is quickly diverted by the mysterious Elfie (Scilla Gabel), Wahl’s daughter, who suffers from a rare medical condition. Elfie is seemingly a kept woman under her father’s watchful eye.

Things get even more complicated when Hans’ girlfriend, Liselotte (Dany Carrel), comes to town for a visit. This unintended love triangle creates a situation that reveals the severity of Elfie’s condition… though in ways so confounding Hans isn’t sure what’s real anymore. His mind is so consumed with uncertainty he hardly has time to learn just how Prof. Wahl is making his dolls…

…although if you are any kind of horror fan the how should be evident; guessing correctly is of small importance because it’s the why that makes Stone Women an intriguing feature. Ferroni’s film depicts a barren Dutch landscape, shrouded in fog, sparsely covered within bare trees, and under the gaze of Wahl’s monolithic windmill. The vibes are definitely of the Hammer Horror variety, an observation further supported by the rich cinematography, classical European styling of the actors, and the ornate sets. Just look at all those tapestries. I was happy enough to simply drink in the visuals. But the fact this is a story well told with a couple disturbing reveals made the experience even richer.

Characters aren’t given short shrift either, as the main cast shares some interesting dynamics. Hans is a weak man who immediately gives in to temptation when Elfie presents herself. Yet once Liselotte arrives and he snaps back to his senses the reaction by Elfie proves maybe he should’ve just left his fantasies in his mind. Professor Wahl is ostensibly in charge but there’s a peculiar arrangement between him and Dr. Bohlem (Wolfgang Preiss) that drives the film’s central mystery and also sees Wahl put in his place when necessary. Ferroni teases a supernatural element by playing such games with Hans’ mind the poor guy nearly needs a trip to the nuthouse. What drives these people is intriguing enough to sustain the story. And with a decent 96-minute running time Ferroni doesn’t waste precious time on red herrings or unnecessary subplots.

Also Read: ‘Maniac Cop 2’ 4K Review: You Have the Right to Buy This Release

As mentioned, Arrow Video has given Mill of the Stone Women a 2K restoration from the 35mm camera negative and, as usual, I have no issue with the work done. The 1.66:1 1080p presentation is a thing of beauty. Colors are warm and densely saturated. A smooth layer of film grain gives a cinematic look as it swirls within the image. Black levels are solid with only a few sporadic moments of looking wan. The contrast is bold. A few scenes have focus issues, nothing major. This was my first time viewing the film and I had no comparison to previous releases but I can’t imagine anyone will be displeased here.

Audio is available in English, Italian, or French depending on which cut you choose, all of which are an LPCM 1.0 mono track. I went with the English dub—since all Italian films of this era did their audio in post anyway—and it’s a clean track with no obvious issues. Composer Carlo Innocenz’s scoring is extremely minimal, though effective in the moments when it does come into play. Subtitles are available in English SDH.

DISC ONE – THE ITALIAN AND ENGLISH EXPORT VERSIONS

DISC TWO – THE FRENCH AND US VERSIONS (LIMITED EDITION EXCLUSIVE)

Arrow has given Italy’s first trip into the world of color a fully-loaded edition worthy of its place in horror film history. The beefy package is packed with multiple cuts, restored a/v, lobby cards, a poster, and more all delivered in one of their signature collector’s edition cases.