‘Maniac Cop 2’ 4K Review: You Have the Right to Buy This Release

Maniac Cop 2embodies all of the excess that made ‘80s horror sequels so great (well, a lot of them anyway). 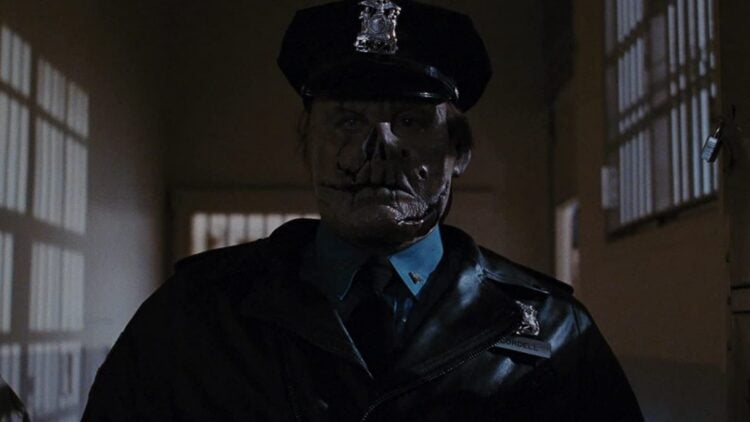 Despite a strong concept and an impressive roster of genre-favorite actors, director William Lustig’s Maniac Cop (1988) remains something of a minor cult classic. The movie isn’t all that great. When you’ve got Tom Atkins starring in a film and the most memorable parts aren’t who he yelled at, screwed, or punched out then it’s clear something isn’t working. It’s not for lack of a great premise – Larry Cohen is a strong writer. But for whatever reason, the film just doesn’t hit the right notes. Despite this the film did manage to turn a tidy little profit, paving the way for a higher-budgeted sequel. Maniac Cop 2 (1990) takes the first film’s formula and turns it up to 9. I want to say 10, but Lustig left a little wiggle room to make this thing truly insane.

Still, this is a horror sequel that does just about everything right by introducing interesting new characters alongside the few who return, significantly amping up the action, providing the Maniac Cop with a new look more in line with his iconic slasher contemporaries, and best of all: giving the titular antagonist his own rap theme song.

Picking up directly after the events of the first film, the sequel puts Matt “Maniac Cop” Cordell (Robert Z’Dar) right back on the streets of New York after surviving his “fatal” accident when we last saw him. The two officers who ended his reign of terror – Jack Forrest (Bruce Campbell) and Theresa Mallory (Laurene Landon) – differ on Cordell’s final fate. Jack is content to go on with his life and act as though Cordell is truly dead. But Theresa thinks he’s still out there, waiting to exact his revenge on a corrupt city that betrayed him. Theresa’s right, though. But it takes Jack getting a savage reminder early on (what Lustig calls the film’s “Janet Leigh moment”) to prove it.

Maniac Cop might be a… well, maniac, but that doesn’t mean he can take on the whole city of New York by himself. So, instead, he takes on a partner, a partner who just happens to be a serial killer with a penchant for beautiful women. Steven Turkell (Leo Rossi) is that killer. It’s his and Cordell’s intention to break into Sing Sing prison (where Cordell was wrongfully imprisoned and “murdered”) to free all the death row inmates and set them loose in the streets. But they aren’t going to succeed easily; not if hardass Lt. Sean McKinney (Robert Davi) has anything to say about it.

Related: ‘Phantom of the Mall: Eric’s Revenge’ is Filled with ‘80s Pizazz but Lacks Originality

There’s so much incredible insanity permeating every frame of this film it’s hard to know where to begin. But let’s start with arguably the highlight of the entire picture: stunt coordinator Spiro Razatos. Lustig wanted this film to go above and beyond the first’s memorable stunts (that van flip off the pier at the end is beautifully shot). Virtually every action scene is chock full of stunt work so complex most low-budget films would save it for the climax.

Without spoiling all the fun, two stunts in particular are just too amazing not to gush about. During a nighttime attack, Cordell handcuffs a woman to the steering wheel of a car… and then pushes that car down a steep hill. This leaves her to essentially run alongside the vehicle until it starts moving so fast she’s forced to pick up her legs and try coasting along with it. Lustig got the idea from Jackie Chan’s Police Story (1985), except they only cuffed the woman in that film; he wanted to see what would happen if someone took it to a more sadistic level.

Secondly, there are been sequences in films where stunt people are set ablaze and continue to pursue victims. Think Jason in a cornfield from Freddy vs. Jason (2003). Here, while at Sing Sing, Cordell is doused with a Molotov cocktail yet is unrelenting in his attack on everyone around him. The guy wearing that flame-retardant stunt suit must have been on fire – a full-body burn – for hours just to get all the right shots. It’s hard not to watch the film and find yourself viewing it from a perspective of reverence for the guy sweating his ass off under all that gear. Those two stunts alone are huge, and that’s just a sampling of the big ambitions for this film.

The film’s other shining star is Halloween II (1981) alumni Leo Rossi as Turkell, the homicidal maniac who joins forces with Cordell to lay waste to the city. Rossi is almost unrecognizable with his bushy beard. An introduction sets him up as an affable strip club aficionado who likes to charm the ladies with his candid demeanor, but that all changes abruptly when he assaults a stripper, gyrating on top of her while shouting “I feel like John fuckin’ Wayne!” just before attempting to kill her. Turkell isn’t the shy, quiet type like most serial killers depicted on screen; he’s a loudmouth crazy loon who takes pride and pleasure in his work. There’s a great dichotomy to having these two paired up – Cordell, the uber-strong, silent type; and Turkell, his mouthpiece with extremely violent impulses.

Remember how bad Cordell looked in the first film? Even Lustig has said the FX work left much to be desired. Well, desire no more because the undead, waterlogged Maniac Cop has been given a new appearance for his return, sporting appropriately gruesome makeup that makes him look like Jason (from Friday the 13th Part VIII: Jason Takes Manhattan) Voorhees’ brother. It’s a huge step up from the previous picture. Lustig and Cohen always had intended for Cordell to have an iconic look, like a Universal monster. Of the three films in the series, this is the only one to achieve that vision.

The only downside? Much of the film either totally obscures his face in darkness or he’s shot from angles where his face isn’t seen. This may have been due to any number of factors (which aren’t covered on the disc), but when Cordell is shown in all his glory he’s as memorable as any other leading (dead)man.

Once the chaos concludes and the credits begin to roll that doesn’t mean the fun has to stop. Jay Chattaway, who provides a frenzied score reminiscent of Harry Manfredini’s work on the Friday the 13th series, was told the film needed a pop-type song for the end credits. And somehow, out of that note, we get the Maniac Cop rap. Remember when the Fat Boys rapped an ode to Freddy? This is just as incredible in a totally ironic kind of way.

Related: ‘Alone in the Dark’ Blu-ray Review: A Killer Cast, But Not Much Else

Blue Underground previously issued this on Blu-ray eight years ago, sporting a razor-sharp transfer from a 4K restoration that is likely the basis for this proper Ultra HD release. The 1.85:1 2160p image is stunning across the board – which at this point is all viewers should expect from Blue Underground. A robust, well-saturated color palette. Incredible detail in every frame. Rich, consistent black levels. A healthy sheen of film grain. No dirt, debris, or scratches. At this point I’m just eating up space spewing adjectives; you couldn’t ask for more out of a transfer.

As per usual the audio has been given an upgrade, too, with an English Dolby Atmos track accompanying a DTS-HD MA 2.0 track. There is a wealth of activity throughout this film, allowing for the Atmos track’s discreet channel placement and low-end to deliver some sonically powerful moments. Sound effects are noticeably separated out when needed, too, providing a highly immersive soundfield. Subtitles are available in about fifteen different options.

Maniac Cop 2 embodies all of the excess that made ‘80s horror sequels so great (well, a lot of them anyway). The stunt work alone is outstanding, but when you add in Cohen’s tight script, a bunch of stellar performances, and one shockingly violent scene after the next it’s apparent why fans of the series continually point to this entry as the apex.