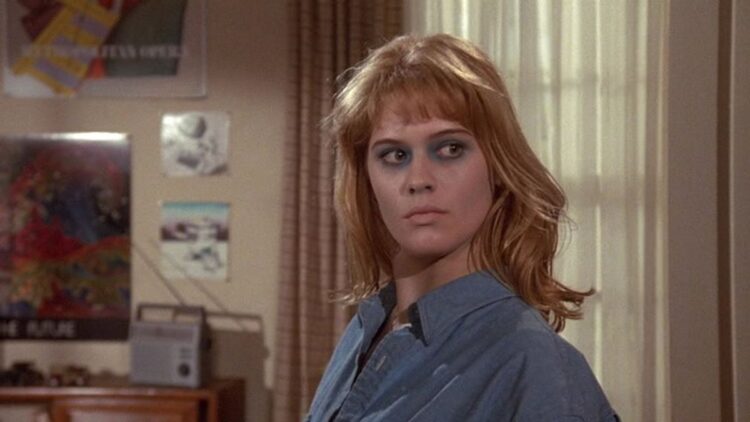 I loved Wes Craven. You loved Wes Craven. We all loved Wes Craven. And Wes Craven made some of horror’s seminal films; movies that will remain pop culture staples for decades to come. But Craven also had several duds in his filmography as many directors who aim high tend to. A few of them are outright unwatchable… one of which being the heavily compromised Deadly Friend (1986).

Now, look, I get this film has a small legion of devoted fans. But after a few viewings, I can honestly say it is a total slog; painfully so. There is exactly one reason why anyone remembers this film or attaches praise to it: the basketball scene – and that was added after the fact. Craven’s original vision was a bloodless, distorted Romeo & Juliet love story that, frankly, sounded bad on paper. And given these two leads, would have looked worse on film.

Paul Conway (Matthew Laborteaux) is a teen genius who has created a clunky-but-clever robot, named BB (think Paulie’s totally-not-a-sex-robot from Rocky IV but painted yellow). Paul and his mom, Jeannie (Anne Twomey), have just moved into a new neighborhood, with Paul quickly making friends with the local paperboy, Tom (Michael Sharrett). Next door to Paul lives Samantha (Kristy Swanson) and her father, Harry (Richard Marcus). Say, might there be a love connection between Paul’s single mom and Samantha’s dad? Not a chance! Because Harry is an alcoholic, abusive piece of shit who verbally and physically assaults his daughter on a nightly basis.

There’s also another wretched old miser on the block, Elvira (Anne Ramsey). She threatens anyone that comes within spitting distance of her gated-in property. On Halloween, Paul, Tom, and Sam decide to pull a prank on the old bag. It ends with BB taking a few of Elvira’s shotgun blasts to the face. Goodbye, robot. Then, on Thanksgiving Sam’s dad gets wasted and beats her up, knocking her down the staircase, giving her a traumatic brain injury. Paul, being the little scientific opportunist he is, decides to perform brain surgery, grafting BB’s microchip to Sam’s dead brain. It works (of course, because the film needs it to). Soon Sam/BB starts to stalk around the neighborhood, taking revenge against Samantha and Paul’s perceived enemies.

Craven conceived Deadly Friend as a sci-fi love story with no emphasis on gore gags. But given his reputation by 1986 audiences expected something more sinister… as did the studio executives who found the first cut to be ineffective. Truthfully, I think Swanson does an alright job. But Laborteaux isn’t a good actor so the thought these two could pull off an emotional love story powered solely by their acting chops alone… I just don’t see it. At least the studio-mandated bloody punch-ups gave us the best scene in the movie, where a basketball pops someone’s head like a gory zit. If I ever need to see that again, I’d be more likely to pull it up on YouTube than suffer through another round with BB.

After remaining stuck on DVD for over a decade Deadly Friend makes the jump onto HD with a new 2K scan from an interpositive that looks fantastic. The 1.85:1 1080p image is incredibly clean, allowing for fine detail to be sharper than ever. Colors are strongly saturated; BB’s yellow paint job totally pops. Film grain moves within the frame organically. Black levels are rich but shadow detail remains visible. An impressive image overall.

The sole audio option is an English DTS-HD MA 2.0 mono track. There is a slight hiss at times though it isn’t very distracting. The levels are good, dialogue is clear. Charles Bernstein provides the score, which has a weird, upbeat electro sound I can’t say I loved – although it does fit this tonally messy picture. Subtitles are available in English.

I try to find some good in every film by my favorite directors but aside from one memorable kill there isn’t a single redeeming quality here. Craven’s original vision was totally compromised and while I don’t think it would’ve worked at least it would have been the film Wes wanted to make. What WB wound up releasing is mediocre at best though, usually, it’s just plain bad.