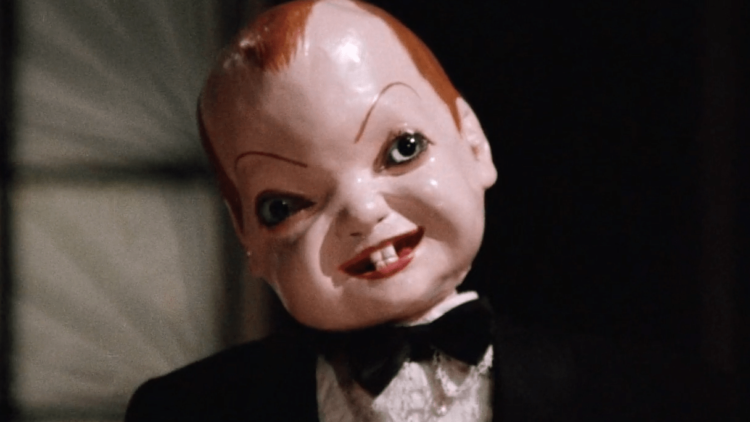 The film follows Marcus (David Hemmings), a pianist who has witnessed the brutal murder of a psychic woman. Driven by the notion that he holds a crucial piece of evidence within the confines of his mind, Marcus teams up with an investigative journalist in an attempt to solve the mystery before he becomes the next victim.

Argento was at the height of his creative output when he made Deep Red. The master director uses frenetic editing, innovative camerawork, and well-timed jump scares to keep the viewer on their toes. The director knows exactly how to make the audience uncomfortable and he does precisely that at every opportunity.

Each harrowing scene is further intensified by a heavy score from frequent Argento collaborator Claudio Simonetti. The music is dreamlike and hazy at times, yet aggressive and foreboding at others. It perfectly complements the tone set by Argento and makes the tense exchanges even more unsettling.

Related: The Sting of Heavy Metal in Dario Argento’s ‘Phenomena’

Cinematic technique and auditory accompaniment aside, I’ve heard film historians say that Argento likes to play with gender stereotypes. Deep Red really supports that assessment. Marcus (David Hemmings) is very proper and reserved, almost delicate. And Gianna (Daria Nicolodi) is bold and in your face. The typical gender expectations of the time are challenged by both of the film’s leads. The arm-wrestling scene is a great example of Argento having a bit of fun with gender roles. Hemmings is fantastic as the ex-pat musician at the center of the story. He’s sarcastic, witty, and a little fussy. His mannerisms perfectly complement Nicolodi’s more direct and aggressive way. Nicolodi plays Gianni as bold, feminist, and unapologetic. And she steals nearly every scene in which she appears.

Shaking up the gender roles a bit makes the characters infinitely more interesting. If Marcus had been the typical macho leading man and Gianna had been a damsel in distress, this film likely wouldn’t possess the staying power it does. More than 40-years after its release, the flick is still relevant and we continue to discuss it and uncover new reasons to love it.

But that’s enough about the film. Let’s get to what’s really important in a home video review. The special features are numerous and many of them are new, with some legacy features ported over from previous releases.

Excitingly, this edition contains both the export version of the film and the original Italian cut. I had previously only seen the export version. So it was meaningful to get to see the film in its entirety, as it was intended. But I appreciate that the cut with which I am most familiar is also available in dazzling 4K. I’m usually not that proactive about format upgrades with films I already own (on multiple formats) because I’m typically pretty satisfied with 1080p. But if there were ever a case for maximizing picture quality, it would be with the work of Argento. His films are so colorful and vivid that I can’t help but want to see them exactly as he intended. And this 4K upgrade really sees the colors almost popping off the screen. The folks at Arrow have done a fine job with the restoration.

Related Post: THE BIRD WITH THE CRYSTAL PLUMAGE 4K Review

The film’s original Italian version includes two audio commentaries. One is a newly recorded track by Troy Howarth and Nathaniel Thompson. The other is a legacy commentary track with filmmaker Thomas Rostock. Both commentary tracks are worth a listen for any die-hard fan of Argento.

Featurette ‘Deep in the Red’ delivers a previously unreleased interview with Argento from 2018, combined with an archival interview with Nicolodi. The runtime is nearly an hour in length, which is fantastic because we get to see and hear so much about the director’s creative process and how the film evolved from an original idea to the feature audiences know and love. The director breaks down shooting locales, set pieces, location scouting and so much more. The in-depth interview with Argento is riveting and should be a joy for fans of the auteur director to learn more about his creative process. It’s also a pleasure to hear frequent Argento collaborator Nicolodi weigh in on the film. However, I am pleased to say there is a legacy mini-doc dedicated solely to Nicolodi. But I will get to that in a bit.

‘The Medium Wore Black’ treats viewers to a sit-down with actress Macha Méril. She looks back fondly on her time working with Argento and her experience making the film. It’s interesting to hear that her physicality and background are a large part of what inspired the director to work with her. Méril reveals that she was often passed over for film roles in Italy based on not looking “Italian enough.” But that was the very thing that drew Argento to her. The creator was looking for an actress that didn’t look like she blended in. The thespian also reveals some interesting behind-the-scenes details on shooting her epic death scene that are sure to be of interest to anyone taken with the film’s bold display of onscreen violence.

The mini-doc ’16 Years in Red’ serves up an interview with Angelo Iacono who worked as a production manager on the film. Iacono reflects (as many Argento collaborators seem to) fondly on his time with the auteur director. Iacono remembers almost immediately seeing something in Argento’s eyes that told him the director was unlike any other. And he stands by that initial assessment to this day.

‘Death Dies’ features an interview with Claudio Simonetti, discussing his past; his musical inspirations; working with Argento; and the early years of Goblin. It’s fascinating to hear a bit about the legendary composer’s background and how Goblin came to be.

‘Carlo Never Dies’ sees actor Gabriele Lavia reflecting on playing Carlo. He recounts his doctor prescribing pills to “keep him going” because the performer was shooting two projects at once. He had very little energy by the time he would get to the set of Deep Red. Lavia also reflects on the film’s staying power and ability to remain relevant after more than forty years. Interviews with actors about roles they played many decades ago can be dry and boring but this is neither. Lavia is a great storyteller and has much to say.

In the brief featurette, ‘I am the Screaming Child’, actor Jacopo Mariani recalls playing young Carlo and reveals what made him stand out to Argento all those years prior. The now-retired actor also discusses his role in Suspiria and creating the perfect shot.

The ‘Bloodstained’ featurette focuses on Lino Capolicchio, the actor whom Argento originally had intended to play the role of Marcus. Capolicchio explains why the part ultimately did not work out for him. It gives fans interesting food for thought about what the film might be like with a different leading man.

Legacy feature ‘Profondo Rosso: From Celluloid to Shop’ takes the viewer along for a tour of the Profondo Rosso shop in Rome. Hosting the adventure is shopkeeper Luigi Cozzi, who has collaborated with Argento on a number of occasions. The shop (which features all sorts of horror memorabilia and the like) doubles as a museum with props and set pieces on display for patrons to admire.  Cozzi sits down for an interview inside the store and speaks to how it came to be. Interestingly enough, Argento was involved in the shop’s inception.

Archival interview ‘Rosso Recollections’ sees Argento looking back on Deep Red and remembering the way his own experiences and views on family informed a lot of his creative output. He goes deep into his associations with Deep Red and also provides commentary on many of his other films, as well as additional projects to which he has contributed. The interview is only about 12-minutes in length. But the viewer gets an enlightening look into Argento’s creative process and the source of many of his inspirations.

‘Music to Murder for’ is a legacy feature that sees Goblin’s Claudio Simonetti opening up about scoring the film, working with Argento, and reflecting on how he first met the film’s director. Simonetti elaborates on Argento’s tendency to pair heavy music with violent imagery. He also admits that he was more than a little intimidated by Argento’s reputation as an auteur director.

The archival feature, ‘Profondo Giallo’ is a visual essay by author Michael Mackenzie, that sees Mackenzie looking back on the unofficial ‘Animal Trilogy’ and even touches on some of the famed director’s other early works. It’s a pleasure to hear such a knowledgeable scholar of Argento’s filmography weigh in on some of the picture’s technical aspects. I like to think of myself as fairly knowledgeable about gialli but Mackenzie is a true scholar and hearing his take is a gift.

My personal favorite of the archival features may be ‘The Lady in Red’. This mini-doc features a sit-down with the multi-talented Nicolodi, who was something of a muse for (and partner to) Argento and featured prominently in some of his most noteworthy efforts, in addition to co-writing the screenplay for Suspiria and more. The actress discusses being young and in love (with Argento) and the positive effect that had on their creative output. She discusses Argento’s filmography and offers her own unique input on what she liked (and sometimes did not like) about the master director’s filmic library. It’s fascinating to hear Nicolodi speak to the progressive nature of her character being a feminist at a time where that wasn’t very commonplace onscreen. She seems like an amazing woman with a storied career. So, getting to hear her recount her memories is great fun.

Last but certainly not least, the film includes a booklet with essays and production notes, a series of lobby cards, reversible cover artwork, and a double-sided poster!

Deep Red is now available on 4K HD from Arrow Video. If you’re a fan of Argento, this is certainly the definitive release of one of his most influential films.