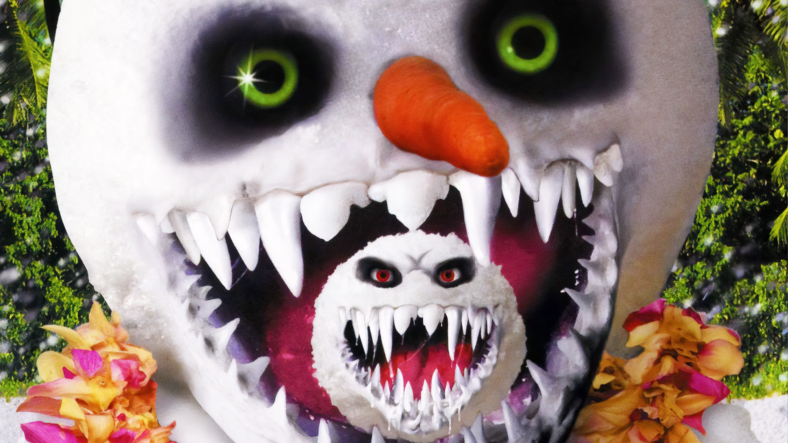 Setting out to make a deliberately campy film is risky. Jack Frost struck the right balance between serious and silly. It’s utterly ridiculous but it’s still watchable. Unfortunately, the outrageously-titled sequel, Jack Frost 2: Revenge of the Mutant Killer Snowman fails to strike the same balance. Unless you’re in the market for a film that’s even more mindless (yet much less entertaining) than its predecessor, there aren’t a lot of reasons to invest in this second outing.

After being buried in an unmarked grave, the antifreeze that contains the remainder of Jack Frost’s genetic material is dug up and unleashed. Not one to waste time, Jack makes his way to the island where Sheriff Sam Tiler is vacationing and picks up right where he left off, leaving a trail of bodies in his wake.

In the original, much of the camp was understated. But here, writer/director Michael Cooney seems to be going to great lengths to make this follow-up as ridiculous as possible. It feels a lot like Cooney recognized that viewers responded to the campy nature of the first and decided to go all-in on that. But the problem is that the first works because it has some redeeming qualities. This follow-up effort does not. And that’s even more true of the version included with this home video release. But I will elaborate on that more in a moment.

A good sequel should raise the stakes. But it shouldn’t deviate too far from what worked in the past without good cause to do so. Aside from a few gags the sort of work (like Jack vomiting a snowball and a handful of amusing one-liners) this follow-up effort is void of anything that makes it stand out. Accordingly, it’s kind of a chore to sit through.

Jack Frost 2: Revenge of the Mutant Killer Snowman doesn’t bother with atmosphere, tension building, or relatable characters. And while that can work when there is something to offset what’s missing, there really isn’t a tradeoff here.

Making matters worse, this Blu-ray release contains the edited version of the film. The majority of the nudity, language, and gore have been excised, which is a shame. The inclusion of what’s missing wouldn’t necessarily have saved the film from itself. But it would have made it more bearable.

Like the MVD Rewind release of Jack Frost, this special edition Blu comes with reversible cover art, a mini poster, and a bevy of bonus features. It also features a brand-new commentary track by Tony Piluso (and friends) from Hack the Movies. I dug their commentary on the original but seeing as I wasn’t a fan of the second installment, I didn’t have quite as much fun with their shenanigans this time around. But that’s by no fault of the folks at Hack the Movies. They’re witty and have plenty to say. And anyone that does dig this sequel should have a good time with their fan commentary.

This release also includes the second half of the (newly released) interview with Scott MacDonald (who played/voiced Jack Frost) that was included with the MVD rewind release of the original Jack Frost film.

Among the legacy features are a director’s commentary track that debuted on a previous home video release of the film, a brief interview with the director, a making-of featurette, and a ridiculous outtakes reel/music video.

There are some interesting tidbits in the interviews and the behind-the-scenes featurettes for anyone that really enjoyed the film. But for anyone else, the bonus features may be a bit of a chore to sit through.

Jack Frost 2: Revenge of the Mutant Killer Snowman is now available for purchase on Blu-ray through MVD.