‘Children of the Corn’ (1984) 4K Review: Arrow Improves On An Already-Strong Release

For newcomers this disc is an easy recommendation, thanks to good-as-it-will-ever-get a/v quality and a long list of solid bonus features. 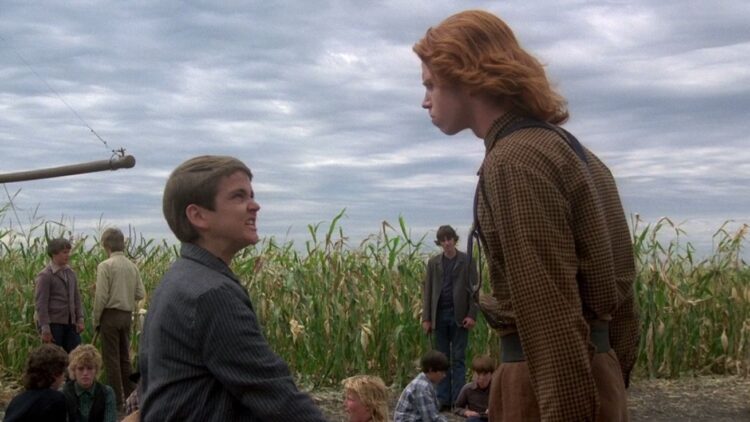 After IT (2017) steamrolled box office records on its way to becoming the highest-grossing horror film of all time (not adjusted for inflation; The Exorcist (1973) will never be topped in that regard), you had better believe studio heads were (and are) feverishly looking to greenlight every possible Stephen King property for modern audiences. To their advantage, King’s work has famously produced more cinematic duds than classics (like 2017’s waste of talent, The Dark Tower), and there are a number of been-done features ripe for a remake. One that I would suggest tackling is Children of the Corn, a 1977 short story King wrote that first appeared in Penthouse (see, sometimes the articles are worth reading). It later found a permanent home in Night Shift, a collection of his shorter works.

In 1984, the story was commissioned for a feature film, with King himself writing the first draft of the script, though it was eventually discarded for a draft done by George Goldsmith. Although the film has a strong cult following and is responsible for spawning nine sequels/remakes/whatever they are, it strays so far from King’s disturbing, dark original story that the property is perfect for reworking. Before anyone says ”They did that with the 2009 version”… try watching it again and get back to me.

In the small Midwestern town of Gatlin, Nebraska, all of the local children have fallen under the spell of Isaac (John Franklin), a self-proclaimed prophet who orders the murder of every adult in town (specifically, anyone over the age of 19) as a sacrifice to He Who Walks Behind the Rows. Cut to three years later and Gatlin is a virtual ghost town. It’s surrounded by fields of corn and bereft of adult supervision. Burt (Peter Horton) and Vicky (Linda Hamilton) are traveling cross country to Seattle, where newly-minted doctor Burt will begin his practice.

As the couple approaches Gatlin, Burt, distracted while driving, hits a young boy in the road. Closer inspection reveals the boy’s throat had been cut prior to the accident. Burt and Vicky head to the only service station near town and find an old man (R.G. Armstrong) who implores them to avoid Gatlin and head up the highway to the next town.

Despite the old man’s advice, all roads seem to lead to Gatlin. Burt finally relents and enters the city limits. There, he and Vicky meet Job (Robby Kiger) and Sarah (Anne Marie McEvoy), two of the only children in town who refuse to participate in Isaac’s bloodshed. Job is adept at sneaking around. But Sarah has the true gift, able to see visions of future events through her dreams. Vicky remains behind with Sarah while Burt heads off into town in search of help. Yet he finds nothing but empty homes and savage youths. The children operate under the ruthless guidance of Malachai (Courtney Gains), Isaac’s muscle who is even more sadistic than the diminutive deacon. With Burt off on his own, the children kidnap Vicky as an intended sacrifice to He Who Walks Behind the Rows. This sets up a showdown between Burt and a horde of brainwashed kids.

The original short story got under my skin when I read it twenty years ago or so. There are passages in that little tale that have stuck with me all these years later. King has a way of describing deaths so succinctly, yet also in such a way that your mind ruminates on the methods of dispatch long after you have finished his words. He provides just enough detail to chill, but not so much you feel like you’re reading Saw: The Book. Now, don’t get me wrong. I like me some 1984 Children of the Corn kids. But part of me has always been a little bummed the film didn’t venture into unconventional filmmaking territory.

Linda Hamilton makes her feature debut here, a mere six months before the release of her watershed classic, The Terminator (1984). Of the two leading adults – R.G. Armstrong doesn’t exactly count, given his one-day-of-shooting role – Hamilton emotes and out-acts her beau, Peter Horton, who just falls flat in the leading man category. Hamilton is mostly sidelined until she becomes the typical damsel in distress but she sells the role well enough. Horton has always been too lifeless for me.

The real meaty work in Children of the Corn is done by the kids, especially Franklin and Gains. The sermons given by Franklin are chock full of hellfire and brimstone. They portend unimaginable agony for those who would defy the word of He Who Walks Behind the Rows. Although only a boy of twelve, Franklin looks older (he was 23 at the time of filming, but a growth hormone disorder left him looking and sounding like an adult/child hybrid) and speaks like a seasoned preacher.

His scene chewing is only surpassed by Gains as Malachai, Isaac’s right-hand man who is all-too-eager to shed blood. Here’s a fun drinking game: take a shot every time Malachai howls ”Outlander!”. Actually, don’t because you’ll probably get alcohol poisoning. Gains, with his brooding looks and fiery red hair, brings a savagery and apathy to Malachai that’s helped him endure as one of the film’s true highlights.

Let me throw some praise over to composer Jonathan Elias, too. His chanting child choir compositions are on par with such celebrated Satanic soundtracks as The Omen (1976) and Rosemary’s Baby (1968). Elias is a classically trained musician who began his career in film music by composing for trailers, like Alien (1979). This film was actually the first feature he was tasked to score.

Blame it on nostalgia, but I still have a soft spot for director Fritz Kiersch’s interpretation of King’s short story all these years later despite its lack of bite and deviation from the superior source material. Maybe it’s the austere Midwestern setting or just the general notion of a cult of children murdering adults and worshiping some… thing that dwells within the cornfield. Speaking of which, that was handled poorly. He Who Walks Behind the Rows turned out to be He Who Looks Like Someone Spilled a Highlighter. Didn’t they finally show it in the third film? Fourth? Who can remember? I do have a weakness for ‘90s horror. Maybe it’s time to revisit this series’ forgotten sequels…

Coming four years after their “remastered in 4K” Blu-ray edition, Arrow Video now releases this film on 4K Ultra HD proper. Though the 1.85:1 2160p image is perhaps a bit less impressive this time around because the increase in resolution only further exacerbates the already-heavy film grain. The prior Blu-ray presented Children of the Corn the best it has ever looked. While those improvements do remain here the image doesn’t offer much additional eye candy. I noticed an incremental increase in some fine detail (during well-lit scenes) and some of the color saturation seems improved. But by and large, this is such a minor upgrade I would only recommend it for diehard fans or those who never owned the previous Arrow Blu-ray.

Audio options remain the same, with an English LPCM 2.0 stereo or DTS-HD MA 5.1 surround sound track. The film was originally mixed in Dolby. I found the best audible experience came from the stereo track, although the multi-channel isn’t a slouch by any means. Effects get a bit more breathing room there but nothing about the expanded audio will impress on a sound system. Jonathan Elias’ score sounds utterly chilling in lossless, contributing, like, 85% of the film’s tension. Dialogue comes through clear and free of issues. Subtitles are available in English.

Owners of Arrow’s 2017 disc may find little reason to upgrade but for newcomers this disc is an easy recommendation, thanks to good-as-it-will-ever-get a/v quality and a long list of solid bonus features. Note: this release contains only a 4K disc and does not have an accompanying Blu-ray.