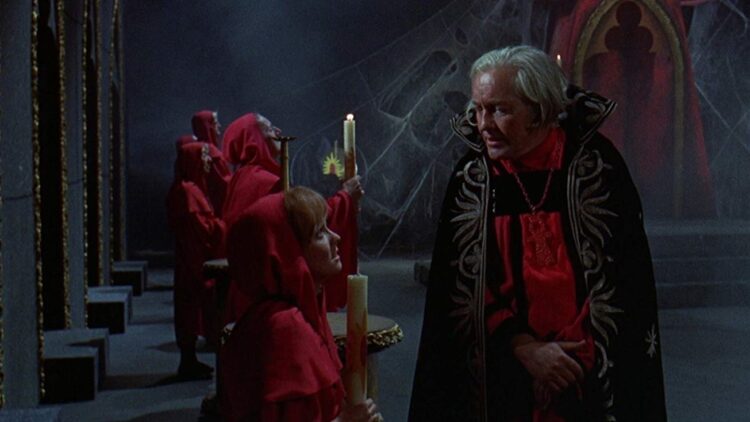 The late ‘60s and early ‘70s were home to a plethora of satanic thrillers, most of which involve some clandestine cult operating on the outskirts of society when outsiders stumble upon their rituals and end the madness. Only a few titles – Rosemary’s Baby (1968), The Exorcist (1973) and The Omen (1976) – managed to rise above what is undeniably a plot ripe for the grindhouse circuit. That was due to a combination of strong scripting and iconic casting. The usual low-budget satanic fare is far schlockier. That’s where a film like The Brotherhood of Satan (1971) comes into play. Though I will say there isn’t nearly enough crazy camp to overcome what is mostly an Old Scratch snoozer with a couple of familiar faces and a clear lack of financing. The title is a bit of a misnomer, too. There are plenty of sisters who dance with the devil in this small town.

Related: Harrowing Clip from Kidnapping Horror THE BOY BEHIND THE DOOR Will Leave You Gasping

Ben (Charles Bateman) is driving through the Southwest on a road trip with his daughter, K.T. (Geri Reischl), and girlfriend, Nicky (Ahna Capri), when their car comes upon a fiery auto wreck complete with fatalities. The family heads into the nearest town, Hillsboro, to report the accident. But they are met by fury as the townsfolk and sheriff begin attacking them out of nowhere. Ben and the girls make a hasty retreat but are run off the road when Ben sees a child in the street and panics. Stranded and out of options, the trio decides to head back into Hillsboro in hopes of finding real help.

Meanwhile, the town is under its own kind of attack with residents being inexplicably killed in droves. What only a select few know is some of the town’s elderly residents have formed a coven, led by Dr. Duncan (Strother Martin). They have a plan: kidnap the local children and transfer their own old souls into the kids’ younger bodies. Ben and his family eventually come to work alongside the sheriff, Peter (L.Q. Jones). When K.T. goes missing it lights a fire to find out what is behind all murders and missing persons.

Related: 13 of the Creepiest Cults Throughout History

There are some great elements at work in The Brotherhood of Satan: Strother Martin, L.Q. Jones, small-town terrors, inventive deaths – but truthfully most of the movie is pretty dull. The stuff I did like I greatly enjoyed; there’s something about that 70s horror aesthetic of which I’ll never tire. Strother Martin is adept at playing scheming, sweaty characters and he gets to do plenty of both here as the conduit between Satan and his aging disciples. Plenty of the expected hellfire and brimstone stuff, and Martin does it all wearing a wicked high-collared cape. L.Q. Jones brings that hound dog-good ol’ boy charm he does so well, looking like an old leather cowhand that can take a licking and return it in kind.

I’ll assume the budget is to blame for the minimal number of on-screen deaths here but they are rather inventive at least. The children’s toys come to life, full-sized, leading to kills like a man murdered by a knight on horseback. These moments add a bit of needed levity, as the majority of the film is either deadly serious or seriously dry.

Where I can find little fault is in Arrow Video’s 2.35:1 1080p presentation, which provides a sparkling image free from dirt, debris, and other anomalies. Per Arrow, “the high definition master was produced and supplied by Sony Pictures.” Though there is no other provenance on the work done it’s not much of a bother because the image looks marvelous. Colors are strongly saturated, film grain lively moves, black levels are stale, and close-ups offer fantastic fine detail. Most of these old ‘70s movies shot on 35mm anamorphic tend to look killer in HD and this is no exception.

The English LPCM 1.0 mono track offers discernible dialogue and a clean, hiss-free listening experience. The track has little weight to it, with few effects if any providing much of a punch. Jaime Mendoza-Nava’s scoring is minimal but the creepy choral cues are effectively placed. Subtitles are available in English SDH.

Your enjoyment of this film will depend on how much you like low-budget ’70s horror. Even so, this film does spend too much time spinning its wheels but the clandestine coven meetings and life-sized toy kills are both worth the price of admission. Arrow didn’t remaster the a/v quality in-house but what Sony has provided is strong in both areas.