‘Halloween Ends’ Review: A Fundamental Misunderstanding of Its Source Material 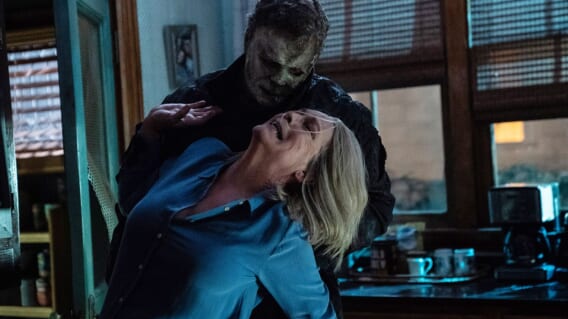 From the opening scene of Halloween Ends onward, you can almost feel its creatives attempt to back-pedal on the unpopular choices made in Halloween Kills. While I personally enjoyed the nonsensical parade of silly violence the second Blumhouse installment provided, there’s a good chance my appreciation for that campy and clumsy sequel lays firmly in the minority.

The conclusion to David Gordon Green’s series of Michael Myers titles went back to the drawing board to establish a different, quieter, and weirder tone than either of the previously Jason Blum-backed entries handed over. But it doesn’t work. I believe there is still a fundamental misunderstanding of its intimate suburban source material. From the romantic through-lines to its introduction to new wellsprings of Myers mythology, Halloween Ends drives us as far from away from Carpenter’s Haddonfield as it possibly can. And I’m not sure if that was its intention.

Making Halloween for a new generation must be an arduous undertaking, and I appreciate a filmmaker who takes the bold steps of attempting something new. However, there are a few key ingredients that act as the pillars of the franchise which are bypassed, misused, or altogether forgotten in the Green Myers films, especially in Halloween Ends.

Halloween, at its best, is about small terrors: the safety of suburban side streets, an impenetrable middle-class America which opens its doors to a Trojan horse of quiet death. But most importantly, at their best, these are engaging stories about women. Even the franchise’s middle trilogy has an effective Jamie Lloyd storyline that carries us through its bizarre foliage. The women in Green’s film are its least interesting touchstones.

From Halloween 2018 forward, Andi Matichak’s Allyson has stood out as a sore thumb of the new series. And this final Blumhouse release continues its unfortunate trend of making Allyson the least charismatic person on screen. Unlike with Kills, Jamie Lee Curtis returns with a few satisfying scenes, but the only fascinating part of this film comes in the shape of a new, male character.

Rohan Campbell lands into the final entry of Green’s Halloween series with a hard, jarring three-story fall. Out of nowhere, Campbell’s character Corey is probably the most interesting facet of this film. The character itself is a hard-left turn in a movie that already seems to pride itself on being a departure from its previous chapters. While his moody and unnecessary addition is fraught and melodramatic, there’s at least a dichotomy at work between him and the other characters.

While it’s tonally at war with what I believe makes this slasher series so special, Corey at least manages to breathe a little new life into a trilogy that has generally been sucking the air out of the room with reckless abandon for close to five years. You might clock Campbell as one of the new Hardy Boys on Hulu. But his performance here is mature, intense, and even tragic when it needs to be. I just wish Corey was in a different horror movie, one where his presence might have been better appreciated.

But maybe the most egregious error at work in Halloween Ends is its treatment of Michael Myers himself. Campy cash grabs like Resurrection and Curse aside, Myers has never been less scary. And this is a shame. At least in 2018 and Kills, Myers was a beast, a menace ripping through the streets of Haddonfield like a ghost in the darkness. This time around, Michael is about as fearsome as the town’s ridiculously and inexplicably rude high school marching band. A handful of nasty kills keeps this finale from ever being boring. But I highly doubt anyone reading this review will find themselves scared during its slightly overwrought runtime.

The final act of Blumhouse and David Gordon Green’s Michael Myers trilogy is further proof that these men have a fundamental misunderstanding of what makes the John Carpenter and Debra Hill original such scary, enigmatic material. Instead of going bigger and badder, these films may have benefited from keeping truer to Carpenter’s and Hill’s 1978 experiment in suburban fear, a quiet and realistic reach into our collective backyard. What once made Michael so fearsome has been completely lost.

I hope that the next filmmaker to wear the Myers mantle is a woman or at least someone who understands how to tell stories about women in their darkest, quietest moments. The franchise desperately needs to leave the bloated machismo of these three failed entries at the door.

‘Halloween Ends’ is further proof that its filmmakers have a total misread of what makes John Carpenter and Debra Hill’s original film such scary, enigmatic material.