The ‘Winnie the Pooh: Blood and Honey’ Poster Art Will Ruin Your Childhood [Exclusive]

Pooh is back ... and he brought a mallet. 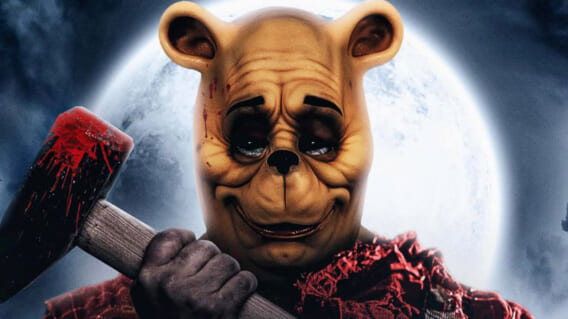 Are you ready to take a hammer to your childhood? Good, because today Dread Central got our hands on the official poster art for Winnie the Pooh: Blood and Honey, the highly anticipated horror reimagining of the classic character from ITN Studios. And it is pure nightmare fuel.

The brand new one-sheet features a killer Winnie the Pooh and his deadly buddy Piglet getting ready to unleash some violent mayhem. I bet that’s not something you ever expected to see on screens.

Winne the Pooh: Blood and Honey went mega-viral after it first hit the internet, with online responses ranging from pure excitement to complete outrage. All of this word of mouth and controversy has only made us more psyched to see how this outrageous new slasher film turns out.

Rhys Frake-Waterfield is the filmmaker behind Winnie the Pooh: Blood and Honey, and we recently had the opportunity to pick his brains about the movie. The hotly anticipated new title is a co-production between Jagged Edge Productions and ITN Studios. Frake-Waterfield is producing alongside Scott Jeffrey. Stuart Alson of ITN is the executive producer, and the cast includes Amber Doig-Thorne, Maria Taylor and Danielle Scott.

Check out the official poster art for Winnie the Pooh: Blood and Honey

Winnie the Pooh is a famous fictional teddy bear first created by author A.A Milne and illustrator E.H Shepard. Pooh would be turned into a household name in 1961 when Walt Disney Productions began making the character into films. The character went into the public domain earlier this year, and now the bear is back and up to no good whatsoever.

Lastly, what do you think of the poster for Winnie the Pooh: Blood and Honey? Will you check out this mysterious horror movie when it’s released? Let me know over on Twitter via @joshkorngut. I’m always around to chat about all things indie horror!