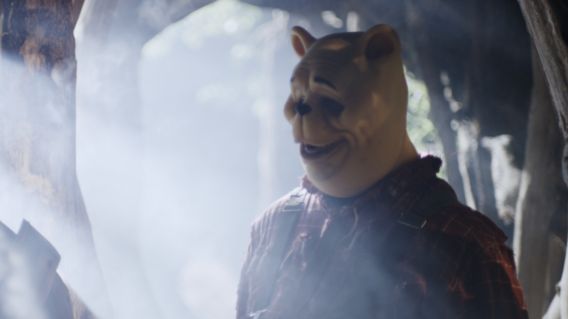 A mysterious upcoming horror film titled Winnie the Pooh: Blood and Honey has appeared on our radar today, and we have questions. The very indie horror title is reportedly in post-production from writer/director Rhys Frake-Waterfield and stars Amber Doig-Thorne, Maria Taylor and Danielle Scott. According to the project’s IMDb page, the film is a grisly retelling of the Winnie the Pooh “legend”. Check out images from the film below.

Winnie-the-Pooh is a famous fictional anthropomorphic teddy bear written into existence by English literary legend A.A Milne alongside the famous illustrator E.H Shepard. The character first became famous back in 1926 with the picture book collection The House at Pooh Corner. Pooh would be turned into a household name in 1961 when Walt Disney Productions began making the character into a collection of films. Winnie the Pooh has gone on to become one of the worlds premiere children’s entertainment franchises.

Now the bear is back, and he’s got a brand new look. He also doesn’t seem to be up to any good, from what we can tell in these official stills from Winnie the Pooh: Blood and Honey. While not much is known about this forthcoming horror film, the images are giving off a very indie You’re Next energy, from the barnyard animal masks, to a message in blood smeared across windows.

Check out the images from Winnie the Pooh: Blood and Honey right here:

Lastly, what do you think of these images for Winnie the Pooh: Blood and Honey? Are you interested in checking out this mysterious horror movie when its eventually released? Let me know over on Twitter via @joshkorngut. I’m always around to chat all things indie horror!