Emma Roberts Is Ready To Return To ‘Scream’ [Exclusive]

Is it Jill's time to shine? 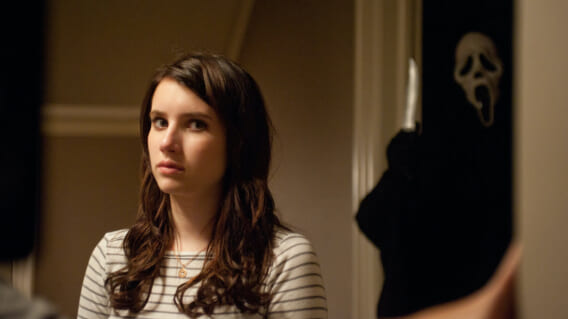 There have been a lot of interesting shake-ups in the Scream universe lately. First we got word that Hayden Panettiere will be making a surprising return as her Scream 4 character Kirby in the upcoming sixth film. But the return of Kirby isn’t the only legacy casting news to send shockwaves in recent days. Neve Campbell also announced that she will not return for the new film due to a contract upset, citing that her offer did not align with her personal value.

Well, recently Dread Central has heard from yet another icon from the Ghostface canon. Emma Roberts has told us that she’s ready to make her grand Scream return, if the franchise will have her, that is.

While speaking with Dread Central about her latest chiller Abandoned, the actor shared her feelings on which horror franchise she’d like to participate in. While she didn’t list anything new, the American Horror Story star slyly stated she’d love to return to Scream, citing that she’s not done with it just yet.

“Maybe I’d go back to Scream, I feel like I wasn’t done with Scream,” Emma Roberts told Dread Central when asked about what horror franchise she’d love to visit.

I don’t know about you, but I’m one of those mega Scream 4 fans, and the central reason I’m so drawn to this sequel is Emma Roberts’ batshit performance as Jill. This is a character I’d love to see make a return to the franchise. And hey, if Kirby can return, why not Jill?

On a recent episode of the Dread Central podcast Development Hell, we learned that an undeveloped Scream sequel potentially saw Jill go to college, where a fresh Ghostface would try to frame her for a new onslaught of slaughter. Check out the episode right here:

Lastly, what do you think? Would you be excited to see Emma Roberts return as Jill? And what are some other Scream legacy characters who should return to the franchise? Make sure to let me know on Twitter via @joshkorngut. I’m always around to chat all things Scream!