The Top 10 Kills In Horror, According to Reddit [Video] 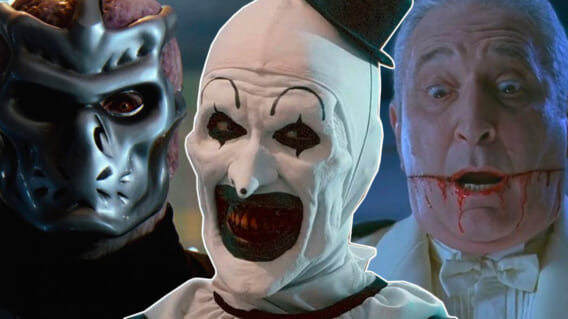 The horror scientists over at the internet’s front page are back it. Today Redditor Cmyers1980 is gathering info on what the best kill scene in the history of horror is. Of course, this is an impossible task. With the countless creative death scenes featured in our favorite genre, there’s no way anyone could ever get to the bottom of the absolute best. Art is subjective, after all. But Reddit has come through with some reliably nasty answers anyway.

Here are the top ten kills in horror, according to Reddit:

There’s nothing like the flash frozen head kill from the tenth Friday chapter. While Jason in space might not be everyone’s favorite, I happen to be a big fan of this Canadian-shot shit show. And the kills are literally out of this world. Especially this one. Ouch.

Two Jason kills in a row, right off the bat? Seems appropriate. Recreated a number of times throughout the franchise, the original sleeping bag kill is one for the books. The simplicity of this slaying mixed with its soundscape is a combination for greatness.

The one horror kill sequence that traumatized the most kids in my elementary school is without a doubt this marionette death from Nightmare 3. The prolonged, grotesque, and all together creative nature of this murder is unlike anything we’ve seen since.

The first Resident Evil film deserves better. The kills in this title are to die for, no matter how many times I may have seen it. And the standout? The laser corridor, of course. The fun intensity of this early moment left a generation with our jaws on the floor.

A proud papa moment for Dread right here. Our original title Terrifier features an infamous ‘sawed in half while upside down’ sequence that is an absolute showstopper. It’s so brutal, even the toughest horror fans talk about it in a hushed whisper.

This 2011 classic from horror heroes Adam Wingard and Simon Barrett goes hard with the violence. Especially when it comes to this brutal blender death. Delicious.

A sister death to the previous one listed is the bread slicer murder moment in Fear Street 1994. Better yet, this brutal kill subverted a lot of our expectations when it came to this teen horror standout.

You can’t outrun a classic. The opening kill scene in Wes Craven’s Scream defined a genre; from Drew Barrymore’s Oscar-worthy performance to the realistic brutality of its final moments, Casey’s kill in Scream is incomparable.

A bit of an outlier on this list, the deeply disturbing decapitation scene from Ari Aster’s Hereditary is not something I really love thinking about. And that’s part of its absolute genius. 10/10.

That opening scene. Do I need to say more?