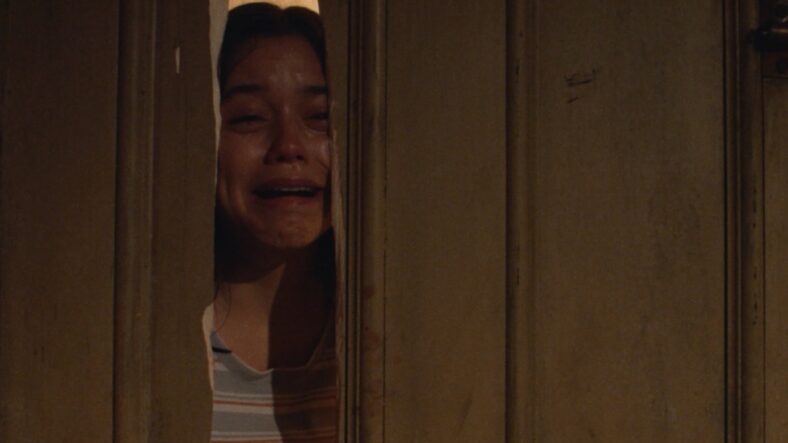 Putting the X in SXSW this year, Ti West returns to the festival that helped launch his career way back in 2005 with The Roost. X marks West’s first horror film since The Sacrament and, judging by the sheer amount of bloodshed, he’s been dying to get back behind the camera. The American indie filmmaker now has the power of A24’s hype machine behind him, the company responsible for the boom in intellectual horror with films like Midsommar and Saint Maud. But West isn’t interested in making a movie that would qualify as post-horror. X isn’t cerebral, but there is a shocking amount of brain matter splattered on the screen.

Set in the stars-and-stripes landscape of 1979, X follows a van of adult filmmakers on their way to shoot a high brow porno on a forgotten ranch on the outskirts of Houston, Texas. There’s the starlet, Bobby-Lynne (Brittany Snow); the aging producer, Wayne (Martin Henderson); the stud, Jackson (Kid Cudi); and the up-and-coming ingénue, Maxine (Mia Goth). In tow, RJ (Owen Campbell) and Lorraine (Jenna Ortega) make up the ragtag crew there to capture the action. Once they arrive, a mysterious elderly couple greet them and point them to the back cabin away from the main house. As seen in the trailer, the decrepit wife becomes increasingly enamored with the sudden presence of the younger generation gallivanting around her property.

West allows us to spend a lot of hang time with the younger characters, quickly endearing them with just how free-spirited they all are. Bits of comedy shine in these early scenes and allow for some breathing room before the situation grows more dire. The adult film shoot seems quite innocent compared to the horrors creeping up behind the scenes. They all don’t know they’re in a Ti West film. Yet.

Ingeniously, the footage from the skin flick starts intercutting with life around the ranch. Scenes start to mirror each other, showing West’s deftness for editing. With a lot of television experience under his belt, West seems to have picked up some new skills to add to his signature style. Ominous, overhead shots are also combined with fan blade transitions that start to feel like quick stab wounds. This all works in the build up to some truly edge-of-your-seat moments that West and editor David Kashevaroff use to pull the rug out from under the audience.

No one is safe in X. With everyone in danger, the vulnerability of shooting a sex scene is only magnified when the sex turns to violence. The characters are so comfortable in their own skin that they don’t mind exposing it to the elements. A lot of them are half naked most of the time. That leads to some funny moments and, ultimately, a lot of opportunities for those soft, fleshy parts to get punctured.

Related: ‘The Unbearable Weight of Massive Talent’ is a Glorious Homage [SXSW 2022]

The sex and gore, however, are used as climactic payoffs; not for overly gratuitous, meaningless moments. The exploitation lies with the vibrant characters consciously exploiting their youth. Someday, you won’t be able to get it up at all. Eventually, your supple skin falls to the wrinkles of time. So, take advantage of it while you can. There’s an obsession with youth on display but it’s not the young that covet it. There’s a purpose behind the plentiful amount of gore, as well.

The makeup FX work here is also top-notch, adding an extra layer to the general creepiness of the old couple. Stephen Ure plays Howard who was also seen as a menacing orc in Lord of the Rings: The Two Towers. Ure taps into his orc-like sensibility here to create a genuinely terrifying aging hillbilly. The practical effects work shown in some crushing blows are almost as gruesome as that moment in Jeremy Saulnier’s Green Room.

X takes your expectations, immediately subverts them, then delivers an explosive release of that tension. With films under his belt like the criminally underrated The Innkeepers, Ti West is becoming one of the only directors since John Landis that’s capable of crafting a true horror comedy. In a few instances, West leans into his tendency to zig instead of zag when it may have been more effective to just go for the straightforward kill. As a result, X feels slightly off balance at times and some audiences may grow tired of being tricked.

West seems taken with the ideas of aging and religious zealotry. Perhaps the just announced prequel to X will explore those ideas even further. If you’re checking out X in theaters this weekend, you should be able to see exclusive footage. So, don’t leave the theater too early!

What X gets right, it really gets right. The trailer hints at something larger looming which might lead to disappointment.