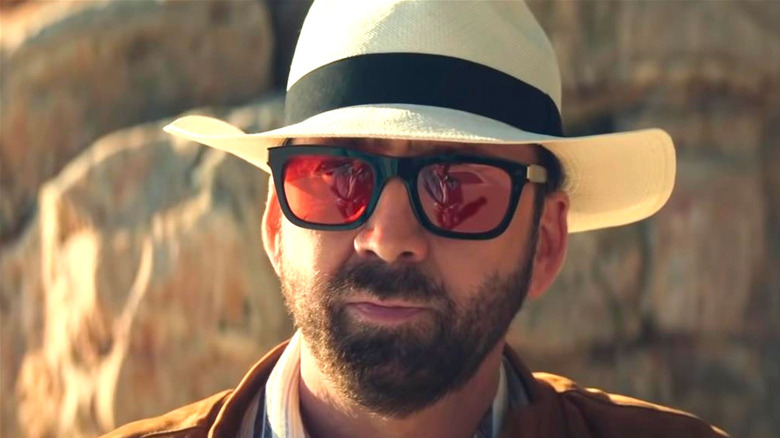 Witnessing the rise and fall (actually he never left) of legendary actor Nicolas Cage has become a kind of cultural phenomenon. Cage’s career has taken him to the top of the heap with a Best Actor Oscar win in Leaving Las Vegas. We’ve seen him become a cult horror sensation in Mandy. And we watched him graciously wear the crown as the “meme King” of the internet. Between a Critics Choice nomination for Best Actor for Pig and his new, outlandishly self-referential performance in The Unbearable Weight of Massive Talent, both sides of Cage’s persona are represented this year.

Director Tom Gormican’s idiosyncratic action-comedy also works as two buddy movies in one. First is the bromance that blossoms between Cage and a billionaire drug lord named Javi Gutierrez (Pedro Pascal). Second is the ego-driven relationship Cage has with his younger self. After initially turning down the role, the chance to act opposite from a de-aged 90s version of himself convinced Cage to sign on. At the start of the film, the scenes with “Nicky” exist in the imagination of Cage in the present day. He struggles to land an A-list part to regain some respect in a Hollywood system that’s somehow forgotten that he’s one of the greatest actors of his generation.

Related: ‘Everything Everywhere All at Once’ is Messy, Kinky and Inspired [SXSW 2022]

After losing out on a major role, Cage reluctantly accepts an offer to attend Javi’s birthday party in Mallorca, Spain for a million dollars in order to pay off some debts. He’s estranged from his ex-wife Olivia (Sharon Horgan) and struggles to get out of his own way in order to connect with his daughter Addy (Lily Sheen). Close to rock bottom, the last thing he expects to find is a real friend in Javi, a secret superfan that’s desperate for Cage to read his screenplay. Following a wild night of partying, their bond is suddenly unbreakable. That is, until two CIA agents (Tiffany Haddish and Ike Barinholtz) recruit Cage to look into a possible kidnapping. From there, Nic and Javi are thrust into a buddy action movie laced with countless references from Cage’s storied career.

The script by Gormican and Kevin Etten doesn’t just take the moments audiences remember most from Cage’s filmography. They also pepper in hilarious nods to lesser-known films like Guarding Tess with Shirley MacLaine. His unlikely action star status is also continually referenced, especially the holy trilogy of The Rock, Con Air and Face/Off. When scenes are shown from Cage’s films, it’s always the most exaggerated line delivery that’s showcased. Hilariously, those snippets serve to point out that Nic Cage was always inside his own acting universe, whether we remember his eccentricities from certain roles or not.

Miraculously, Pedro Pascal’s Javi works as a perfect counterbalance to Cage’s Nouveau Shamanic acting method. Their electric chemistry together demands to be seen in future pair-ups. Even if the two never reconnect in a future project, they’re in almost every scene together. It’s a joy to watch them orbit around each other. There’s a real sense of brotherhood between them. It’s the heart of the film, even when Cage’s own family probably should be.

Unbearable Weight probably couldn’t have been made with any other actor besides Cage. There’s not really anyone out there so acutely self-aware and willing to boldly acknowledge their unique position in the cultural landscape. For a movie that Cage himself turned down at first, it feels strangely inevitable. The Unbearable Weight of Massive Talent marks the absolute zenith of Cage’s career, where he can poke fun at himself and give one of his best performances at the same time.

There’s a sense of a cosmic collective unconscious that must have been at work in order to breathe life into this movie. At the world premiere, we could all feel it in the air.

Admittedly, the movie-within-a-movie construct does weigh the film down. The drug kingpin storyline may have been better suited for a standalone with Haddish and Barinholtz. They really are in an entirely different movie, one that I didn’t really care about. High on our own supply, we all just wanted to revel in the meta magic dust of it all.

This could easily be called Nicolas Cage’s best performance because, really, it’s every performance bottled into one.