Devil’s Due: 6 Scary Memorable Depictions of Satan On Screen

In honor of Dread release 'Val' — here are 6 of our favorite portrayals of demons in film! 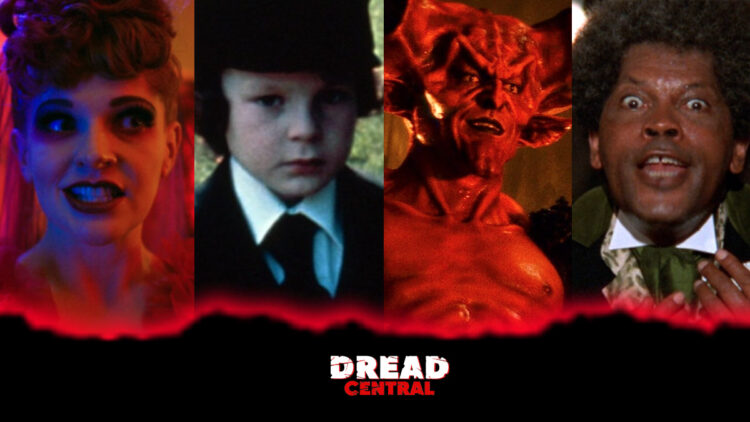 I’m not a religious man, but I sure do know a good devil when I see one.

To celebrate the release of Dread Presents title Val, I’m rounding up six of my favorite interpretations of the dark beast portrayed on celluloid. As Val—our latest and greatest title—reminds us so well, demons can take many shapes and sizes.

For the religious zealots in the house, steer clear babe. We’re about to unearth 6(66) of the wildest, entertaining and altogether most unique interpretations of Satan (and her demonic counterparts) that modern Western cinema has ever produced.

Tales from the Hood oscillates impressively from horrendously dark to joyously charming. The wrap-around in this title concerns a group of young men who get more than they bargained for after entering the world’s most maddening mortuary.

Clarence Williams III plays the mortician who, in the end, emerges as one of the most shocking portrayals of the devil on this list. The last moments of the 90s horror classic turn on a dime from very fun to deeply dark.

Tales from the Hood was a Rusty Cundieff joint from 1995 produced by Spike Lee and Rusty himself. The film dealt with very real themes affecting Black Americans like police brutality, racism and gang culture. It’s a true blue 90s standout in an era that was generally lacking in the thrills and chills category. You can catch two much more recent sequels to this film, both hailing from Cundieff.

You can’t talk about the devil in film without touching base with Damien. The Omen franchise saw its origins back in 1976 when writer David Seltzer—author of the novel—wrote the treatment for the first film. Believe it or not, The Omen film series produced a total of five full features between 1976 and 2006. The first three films saw theatrical releases, while the fourth was a direct-to-television moment in Canada. You’ll also remember the 2006 remake starring Julia Stiles, which was much better than it had any right being.

The Omen told the story of Damien Thorn, a young boy who is literally the spawn of Satan. How very metal. Over the course of Damien’s illustrious career, he goes from little boy to full-grown Antichrist who moonlights as a presidential candidate. Sounds kinda familiar.

By the way, does anyone remember Damien? You know, the 2016 television series which ran for one season before its cancellation? I feel like it got lost in the shuffle with The Exorcist series, and I wonder if it’s worth revisiting…

THE WITCHES OF EASTWICK

Based on the 1984 John Updike novel of the very same name, The Witches of Eastwick features three women who lead sexually unfulfilled lives in a town of creeps and religious freaks. All of that changes when Daryl Van Horne (Jack Nicholson) roles up with a bunch of cash and boatloads of charisma. Daryl uses the women’s insecurities to coerce them into the world’s hottest, most unrealistic harem.

This film also stars Cher, Michelle Pfeiffer, and Susan Sarandon. While this movie doesn’t hold up in a post #MeToo landscape, it’s still certainly worth mentioning for its outrageous direction at the hand of George Miller. The Mad Max mastermind turns this sexy dark comedy into a bizzaro and often uneven story about the devil. I think? That last shot of Daryl is one HELLUVA choice.

Sundance darling Nina Thyberg is now reportedly in the process of updating Witches for a modern audience. This exciting newcomer is responsible for directing Pleasure, a project which stirred the cauldron at Sundance 2021. Pleasure was recently acquired by Parasite and Titane release house NEON.

Stephen King has his fair share of devil-esque characters within his vast catalog of creeps. Maybe his most apparent is Randall Flagg, a charming—albeit terrifying—antichrist bad boy. Flagg is the middle management of destruction, showing up in countless King stories including The Stand, The Dark Tower, and The Eyes of the Dragon. But Flagg ain’t the only antichrist type in the Kingdom. Lest we forget about Leland Gaunt, an even more obvious interpretation of satan.

Needful Things is a 1993 adaptation of Stephen King’s endlessly long 1991 novel of the same name. Leland Gaunt appears as the antagonist in both; a devilish type who shows up in a small town to open a shop of antique curiosities. In his shoppe, aptly also titled Needful Things, locals are able to source exactly what they desire. At a price, of course.

Leland may only appear once in the Stephen King ecosystem, but we are likely never going to forget Max von Sydow’s classic interpretation of this spooky heretic.

A 1985 acid trip, Legend stars a fresh-faced Tom Cruise, Mia Sara, David Bennent, and Tim Curry in one of his most iconic screen roles of all time. Legend was a big-budget fantasy production considered to be a big ol’ commercial flop upon its release. While it lost the studios a good amount of cash, Legend gained critical acclaim, winning its share of Oscars, BAFTAs, and Saturn awards for its impressive mid-80s practical effects and production design.

Over the years Legend has ascended from forgotten flop to cult classic, largely due to Tim Curry’s extremely memorable portrayal of The Lord of Darkness. In the film, Tom Cruise’s Jack is established as all that is good in the world. He embarks on a classical hero’s journey to defeat Curry’s devilish character in order to stop the oncoming threat of an eternal night. And millennials think we have it hard.

Tim Curry’s beastly prosthetics helped earn this film an Academy Award for best make-up and is still constantly emulated to this day. I’m looking directly at you Tenacious D. The makeup effects for Legend were designed by Rob Bottin, the wizard also responsible for practical effects in classic horror titles like The Howling and The Thing.

Careful, hun. Not all is as it seems in the Haus of Val. Dread’s newest release is helmed by Aaron Fradkin and penned by Fradkin and Victoria Fratz. The cast features horror icon Misha Reeves (The Willows), Zachary Mooren (TV’s Criminal Minds) and the unforgettable Sufe Bradshaw (Veep, Lovecraft Country).

What starts off as a cat and mouse chase between a wanted criminal and the authorities quickly unravels into a story much darker than I was ever expecting.

After criminal Fin breaks into the home of a high–class escort, it’s not long before he discovers that you get more than you bargain for with Val. Short for “Valefar” – Val is a demon who offers to make all Fin’s problems disappear… if he agrees to follow her rules, of course. Alas, in Val’s world there are no accidents. Soon the gun-wielding criminal meets her other “customers”, and learns that Val was expecting him all along…

Take it from me kiddies, it’s not easy to escape Val’s dungeon. Good thing there’s internet down here so I can work remotely. I know it’s a long shot, but can someone please make sure to pay my phone bill. I’d really love it if it didn’t get cut off.

Val is now available On-Demand and comes to Blu-ray on November 2nd.

Lastly, what did you think of my demonic roundup? Which interpretations of the Dark Lord should I include in a possible sequel list? Let me know on Twitter via @joshkorngut. I’m always down to talk about all things horror!

Also, if someone could turn down the heat, that’d be really appreciated…