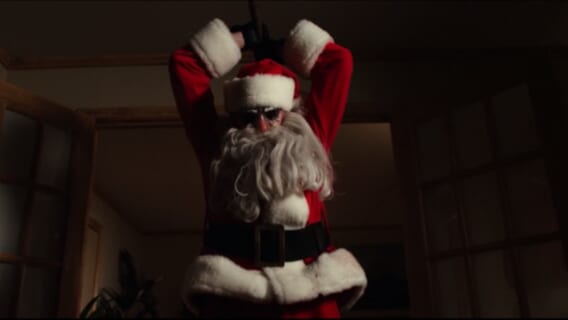 Don’t put avocado on the burger, and don’t let Steven C. Miller’s Silent Night escape your clutches this holiday season. Killer Santas are all the rage. Joe Begos added a practical, grindhouse touch back to the season’s slayings with this year’s Christmas Bloody Christmas. David Harbour plays Good Santa with a Gun in the forthcoming Violent Night. Christmas horror writ large ranges from the deliberately incendiary (poor Dee Wallace in the poor Red Christmas) to the bonafide classics (Black Christmas, obviously). It doesn’t matter what’s under the tree so long as there’s a gory Christmas slasher playing on the screen behind it. Sure, it’s not an especially diverse canon. Though even so, Miller’s Silent Night, a decade out from its original release, remains the seminal 21st-century Christmas slasher movie.

A loose, loose remake of Charles E. Sellier Jr.’s Silent Night, Deadly Night, Silent Night follows horror remake royalty Jamie King as she trudges around her dying, industrial small town in search of a maniac hacking up alleged sinners. It sounds sleazier than it really is. Miller isn’t afraid to dabble in some nudity and seedy shenanigans. Yet principally, Silent Night looks and feels remarkably mainstream. This is a gory slasher with the sensibilities of something that ought to have had a theatrical release.

Also Read: ‘Breathing Happy’ Is A Fantastical Look At Addiction and Grief Perfect For The Holiday Seasons [FilmQuest 2022 Review]

Silent Night has plenty of Malcolm McDowell mayhem for the older crowd. Gore aficionados will have their festive fill as a softcore pornstar (Cortney Palm) is lowered into a woodchipper. In a lot of ways, Silent Night sways to the beats of another Jamie King horror remake—Patrick Lussier’s 2009 remake of My Bloody Valentine. The spewing red stuff endures, though it’s given a glossy, modern touch. Too often, modern slashers shift into nostalgia overdrive. They think practical gore and a synthetic soundtrack are enough to really sell the homage. It’s a cheap tactic, though, one that arguably forgets the omnipresent, however tenuous, humanity at the core of so many seminal eighties slasher movies. Even John Grissmer’s Blood Rage endeavors to elevate itself beyond shlocky Thanksgiving terror with an (arguably misguided) foray into the fracturing of Louise Lasser’s mind.

Plenty of antecedent slashers relished grimy underbellies. Michael Schroeder’s Out of the Dark is as filthy a slasher movie as any (and it’s great), though that was far from the norm. It’s why the likes of Stewart Hendler’s Sorority Row remake endure years after release. Beyond being remakes of popular eighties slashers, they better understand not just the artifice of recreating them decades later, but the innate feelings. There’s an almost unspoken awareness of what made them so successful, and while it can be difficult to identify, audiences know it when they see it.

Also Read: ‘Violent Night’ Trailer – David Harbour Is Seeing Red As A Santa With Violence On His Mind

Silent Night has that unknowable, nebulous zest. As such, it remains not only a top-tier remake, but the touchstone for the century, a case study of how to bring the 1980s home after forty years away. The deaths are gnarly, though rarely cruel. The composition exceeds competent, looking genuinely inspired in places. Everyone from McDowell to King to Ellen Wong’s receptionist is committed to their roles beyond genre constraints. They are lived-in, dimensional characters. Sure, they’re lambs being led to a Santa Claus slaughter. But it’s nice when the gore has some personality to go alongside it.

Most impressive, however, is that Silent Night makes a point without breaking itself. Yes, Christmas horror undoubtedly has the same thing to say. The holidays are bad. Modern traditions are little more than cynical, consumerist garbage. And, sure, Donal Logue gets a beefy monologue here where he says as much. Yet, Silent Night never rests on the laurels of that argument alone. It has considerably more to say, trafficking in some trauma-informed ethos to go alongside its Christmas carnage. It’s not pessimistic simply to be pessimistic. And, there’s even some bonafide Christmas cheer thrown in to balance out the depressive bloodshed.

Silent Night isn’t a classic by any means. For as much as it does well, it’s similarly rife with problems. Its depiction of law enforcement, for instance, misguided as it was in 2012 is positively shocking ten years later. The central mystery is teased only to fall flat (a killer reveal with a killer the audience simply doesn’t know). And, perhaps most damningly, it has a terrible cover of “Silent Night” playing over the end credits. So, yes, Silent Night doesn’t deserve to sit alongside Black Christmas in the canon of Christmas horror (this century, that honor perhaps goes to another Silent Night), but it remains one of the most effective Christmas slashers released in years. Given the lumps of coal horror audiences have had, that’s maybe the greatest gift of all.