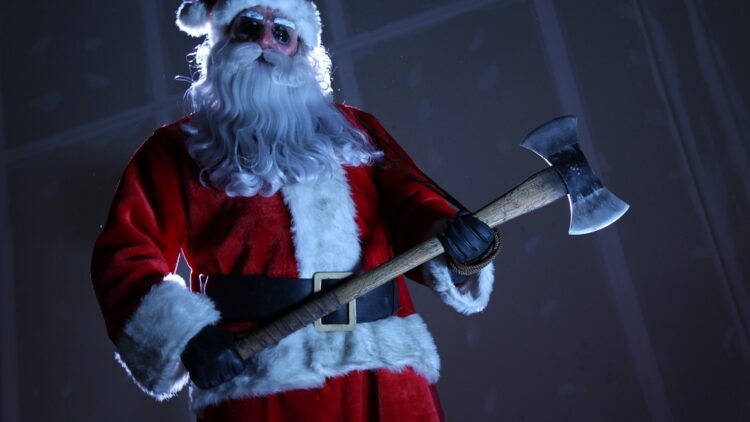 The Christmas holiday is right around the corner. So, I’m taking a moment to shine the spotlight on an under-seen holiday horror film that deserves a bit more love. Silent Night (2012) may not be as obscure as some of the titles showcased at The Overlook Motel. But it’s far from a celebrated effort in the holiday horror subgenre. Silent Night rarely comes up in conversation when the discussion turns to noteworthy holiday horror. But I’d like to make a case for why it should be on your radar and why you may want to give it a shot. So, grab a cup of eggnog, put on an ugly sweater, and let’s take a look back at an underappreciated holiday slasher.

Steven C. Miler’s Silent Night maintains the dark, gritty tone of the original and frequently nods to the sleazy roots of its predecessor. But this reboot carves out a story that stands squarely on its own two feet. And that’s precisely what a successful reimagining should do. It should pay tribute to that which came before while doing its own thing.

Related Post: The Overlook Motel: ‘Housebound’ is Brimming With Chuckles and Chills

In the spirit of separating itself from its predecessor, Silent Night doesn’t really give us a long-winded explanation as to why its killer Santa Claus has such a taste for mayhem. And, in some ways, that might be more frightening than if we had an in-depth examination as to what makes Saint Nick snap.

The killer Santa in this reimagining is much less campy and arguably much more imposing than the punishment-obsessed Billy in the original. Billy from Silent Night, Deadly Night is painted as at least somewhat sympathetic, a victim of unspeakable abuse. But the killer Santa in this redux doesn’t give us a great deal of insight into what makes him tick.

Like any self-respecting reboot should, this film ups the ante from that which came before it. We see the killer Santa Claus dispatch a foul-mouthed child of no more than 13 in the first 15 minutes of the film. It’s unexpected and gruesome. It immediately conveys the message that all bets are off in this loose reimagining of a controversial holiday slasher.

Silent Night does a great job of serving up festive death sequences in rapid succession. It delivers on the holiday spirit and arterial spray. The wood chipper death scene is particularly gruesome and memorable. I would even go so far as to count it amongst my favorite kills from contemporary holiday horror cinema.

Miller really leans into the inherent madness of the screenplay (by Jayson Rothwell). He treats viewers to an epic showdown featuring a killer Santa with a flame thrower in tow. The ridiculous nature of the subject matter isn’t lost on Miller. But rather than playing it straight, the director leans into the schlocky nature of the story. Plus, he has a great time with it.

As for why this reboot hasn’t found a wider audience, I suspect that has a lot to do with the lack of fanfare around its release. Silent Night wasn’t met with the same level of controversy as its predecessor, only releasing to a small handful of theaters and managing to avoid the angry, picketing mob that made the original so infamous.

Silent Night is a little rough around the edges at times. Some of the performances are a bit stiff. And some of the dialogue is a little stilted. But if you can look past that, this is an enjoyable film that deserves to be celebrated as a contemporary holiday treat.

As of publication, Silent Night is available for purchase on physical media and for rental via a number of digital retailers.