TIFF Review: In ‘Silent Night,’ The Apocalypse Is Under the Tree

Though it's billed as a doomsday dramedy, director Camille Griffin's debut feature haunts like a gothic fever dream. 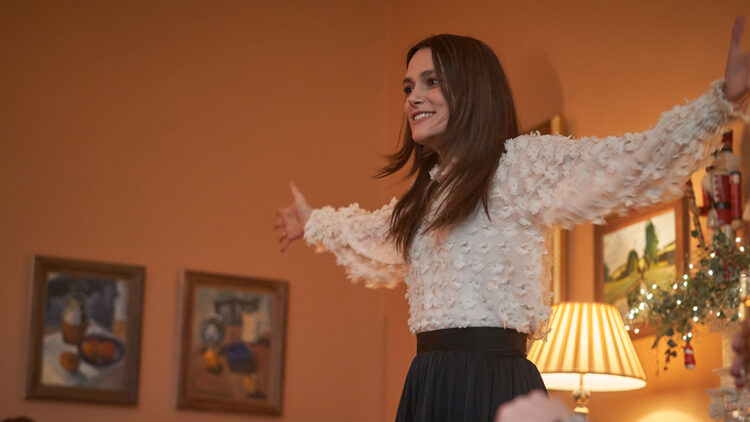 
Silent Night, though billed as a dramedy (always a trustworthy hybrid), is thoroughly depressing. Its writer-director, Camille Griffin, is an immense talent, but the film often seems at odds with its intended tone—though perhaps that is the point. Silent Night is perhaps better billed as a horror movie with a jagged, barbed edge. With the uncomfortable, organic humor of Noah Baumbach and the dour, apocalyptic gloom of Mick Jackson’s Threads, Silent Night is wildly unconventional and thoroughly, utterly distressing.

Keira Knightley stars as Nell, mother of three and wife of Simon (Matthew Goode). They’re in the middle of preparing for their Christmas dinner, to which they have invited several of their closest (and, contrary to its modest roots, most famous) friends. Annabelle Wallis, last seen in this year’s Malignant, is accompanied by Lucy Punch, Kirby Howell-Baptiste, and several others as friends of Knightley’s Nell. They bring their children, gifts, and sticky toffee pudding. They also bring their red pills.

An enigmatic gaseous storm has engulfed the planet, killing everyone in its path. The British government has benevolently (though not quite) given every legal resident a red suicide pill, leaving immigrants, the homeless, and the poor to die in the cloud. Art (Roman Griffin Davis) is Nell’s more precocious child, simultaneously skeptical of the severity posed by the storm and angry at his parents (and their generation writ large) for too easily conceding to the ostensibly inevitable. The storm, alleged to be the planet striking back, is routinely conceptualized as preordained, with none of the posh assemblage of known faces willing to acquiesce that– by dint of their votes, influence on policy, and remunerative social influence—they could have done something about it.

Art’s worries are only assuaged by Sophie (Lily-Rose Depp), a pregnant girlfriend of a friend who, like Art, would rather endure the storm than take the pill. Knightley, no stranger to end of the world scenarios (see Seeking a Friend for the End of the World), would like this last night alive to be about love and forgiveness, not anticipating the smattering of cliché her dearest friends have brought along. The first act, though intermittently funny, is a retread of other dinner party from Hell scenarios. Couples bicker, longstanding resentments come to light, and characters consume an incongruous amount of champagne, acting just as drunk as the script demands, though never parallel with their actual consumption.

The genre elements, like the purple, gaseous storm itself, soon appear as Silent Night shifts from uncomfortable comedy to dour, existential reflection on the end of the world. Gone is the Michael Bublé, replaced instead by elegiac holiday renditions by Birdy. The storm is seen in earnest– a horrifying, almost sentient sea of clouds and thunder– the mood shifts, and genuine tears are shed. The peripheral horror elements drown the characters, plaintively refracting their worst fear– namely that this night, this last night, is all that’s left. When the clock strikes twelve, they’ll be dead. There are glimpses of dead bodies and raging storms, Griffin eager to fully lean into the narrative’s endemic apocalyptic hallmarks.

Silent Night stumbles once more in its final moments. Sure to be a polarizing ending, it will either strike audiences as a final gut-punch or a copout that renders what came before moot. Indeed, what keeps Silent Night inches from greatness is that same hesitancy. There are threads that indict the government, the scientific community, and everyone in between. It both embraces and rejects skepticism, and while this messiness is embodied exceptionally by a noteworthy cast, in terms of Griffin’s fundamental point, it muddies the water.

Nonetheless, Silent Night is likely one of the most frightening debuts this year and certainly one of the most haunting out of this year’s Toronto International Film Festival. It haunts like a gothic fever dream, demanding the audience identify and see themselves crouched in its LED corners and hidden under its tartan bedsheets. Silent Night is almost aggressively upsetting, though the human spirit—flinty and iridescent—remains alive. Horror adjacent properties don’t get much better. Silent Night, at the end of its dour, unyielding day, is worth celebrating.