Eleven has found family, power, and leadership over the last four seasons of the acclaimed series. 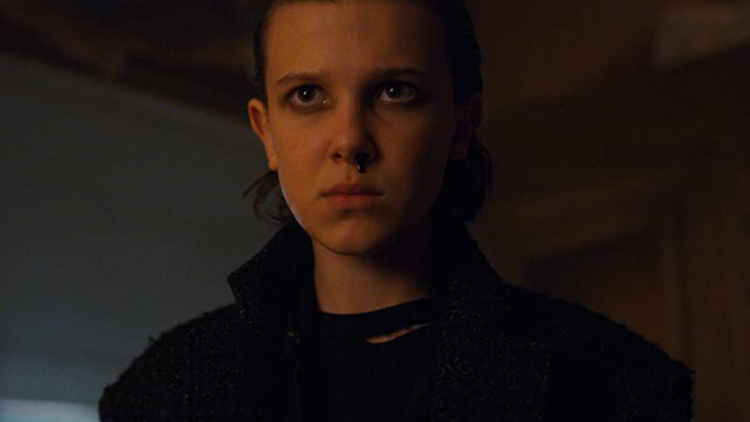 Much of the promotional imagery for season three of Stranger Things featured a girl in her early teens standing with a determined look on her face and her arms outstretched to protect her four terrified friends. She is Eleven (Millie Bobby Brown), or El, a young girl with enormous telekinetic powers. Her name refers to the number tattooed on her wrist, given to her as a name at the lab where she’s been held prisoner for most of her life.

Eleven escapes from this scientific prison and makes her way to the neighboring town of Hawkins, Indiana. But she is not the only being to emerge from the lab. An otherworldly monster known as the Demogorgon has burst through the barrier between worlds. Unfortunately crossing its path, a boy named Will Byers (Noah Schnapp) is hunted by the monster and pulled into a layer known as the Upside Down. This breach begins a strange saga in which Eleven is constantly tasked with saving Hawkins and protecting the group of friends she comes to see as her chosen family.

El’s first contact with the world outside the lab is at a rural diner on the outskirts of town. Trying to steal food, she’s caught by the proprietor, a kind man who attempts to help her. But his own calls for help are intercepted by government agents working for the lab director Eleven calls Papa (Matthew Modine). The kind man is executed during an attempt to recapture her. She witnesses the murder and internalizes the idea that knowledge of her existence puts those around her in danger.

When she first meets Mike (Finn Wolfhard), Lucas (Caleb McLaughlin), and Dustin (Gaten Matarazzo), she’s wandering the woods while they search for their missing friend Will. Mike hides El in his basement and she begs them not to tell anyone she’s there. With limited vocabulary due to her strange childhood, Eleven uses two fingers to pantomime a bullet to the head, trying to convey the stakes of revealing her location. She desperately needs help. But she must reconcile her own safety with the deadly threat she poses to anyone who attempts to give her shelter.

Eleven begins to form tentative friendships with the boys as they learn about her unique powers. Her strongest connection is with Mike, who takes it upon himself to protect her from the start. Less excited is Lucas who constantly calls her a freak and lobbies the other two boys to leave her behind. Dustin falls somewhere in between, fascinated with her abilities and convinced she can help them find Will.

Venturing out into the world in Mike’s older sister’s clothes, El watches bullies pick on her friends and uses her powers to defend them. She’s able to prove that Will is still alive using radio frequencies. Eleven locates him using psychic powers aided by sensory deprivation. She uses her powers to protect the group though they are not always receptive to her plans. Essentially still kids, they don’t fully comprehend the stakes of their actions. Not until Eleven is forced to kill lab agents in front of them. In a jaw-dropping scene, she uses her powers to flip a van through the air, making way for their escape. Seeing the lengths she will go to protect them, Lucas apologizes for his cruelty and welcomes her into their club. She becomes an official member of their party and a close friend.

Having rescued Will and killed the Lab agents, El and her friends find themselves staring down the hideous jaws of the Demogorgon. They retreat into a classroom and attempt to make their stand. While both Dustin and Mike put themselves in harm’s way to protect her, it’s Lucas who is able to land a pivotal shot with his wrist rocket slingshot. This allows Eleven to gain a crucial foothold against the monster and she uses her powers to annihilate him. Unfortunately, she pays a heavy price for this act. She’s sucked into the Upside Down along with the monster she’s dispatching. The boys are left alone, grateful to be alive but with no clue to the whereabouts of the girl who saved them.

Season two reveals that Eleven emerged from the Upside Down hours after defeating the Demogorgon. Seeking shelter, she makes her way to Mike’s house. But she finds it overrun with police and government officials. Mike swears that he has no idea where she is. Meanwhile, she watches from outside while he’s told how dangerous this knowledge could be to him. In tears, she retreats to the woods where she lives for weeks before finally finding the courage to approach police chief Jim Hopper (David Harbour) for help.

Hopper takes Eleven in, later adopting her as his own daughter, and moves her into a shack in the woods. They spend the next year together, getting to know one another while Eleven hides from the world. Hopper has forbidden her from contacting her friends, believing it to be unsafe for everyone involved. This isolation is the cost of her powers. She formed close bonds with her friends and forged their loyalty by protecting them. But their connection to her is what ultimately puts them in danger. Now she must deprive herself of their support in order to keep them safe.

Early seasons also show glimpses of El’s early life and the high price she’s had to pay for her powers. El was taken from her mother at birth. But she has a fuzzy memory of a woman desperately reaching for her while being dragged away by lab agents. Once she locates her mother, she learns the terrible price the woman has paid. Her mother now lives in a catatonic state due to massive electroshock treatments she endured after trying to reclaim her daughter.

Also Read: ‘Bit’ and the Politics of Power [Matriarchy Rising]

El locates an older sister, Kali (Linnea Berthelsen), the eighth of Papa’s children. The girls connect over their shared anger at the grave injustices they’ve suffered. El contemplates joining Kali’s family. But a vision of Hopper and her friends in danger convinces her they need her help. She chooses to leave behind this connection to her past and goes back to Hawkins to save her chosen family. She arrives in the nick of time and closes the breach that put Hawkins in danger, saving the town and perhaps even the world once again.

Season three opens with Eleven attempting to live a normal life. She and Mike are dating and Hopper struggles to make peace with the way their relationship is advancing. She becomes closer with the group’s only other girl, Max (Sadie Sink). The two form a strong friendship allowing Eleven to relax and have fun. This angers Mike who believes Max is jeopardizing El’s safety. He’s terrified of losing her again and confesses to the larger group that he loves her.

He puts this love into action during a confrontation with Billy (Dacre Montgomery), Max’s older brother now possessed by the Mind Flayer. He seizes a moment of distraction and holds El high in the air by her throat, preparing to kill her. It’s a terrifying moment that reminds us of just how young and vulnerable she is despite her massive powers. Mike attacks him from behind, risking his life to save her. Later, the much larger monster grabs hold of El and pulls her toward its gaping mouth, while her friends hold onto her arms to pull her out of its clutches. Mike is the first to grab hold of her while his sister Nancy (Natalia Dyer) shoots at the beast and Lucas uses an ax to sever the tentacle gripping her leg.

The season’s climax is as moving as it is spectacular. Billy finds Eleven and is preparing to sacrifice her to the Mind Flayer when the gigantic beast suddenly gets hit from above with a barrage of fireworks. Her friends all stand on the mall’s second floor, directly challenging the massive monster by hurling explosives at it. This allows Eleven crucial moments to mentally reach Billy and convince him to reject the Mind Flayer. Unable to use her powers, she is forced to rely on the strength she’s fostered in her chosen family. They have the courage to defend her because of the example she’s set by constantly defending them.

Hoping for a fresh start, season four begins with Eleven living in California with Will and his family. She frequently writes to Mike. But, she lies to him about her popularity, embarrassed about being picked up by more popular kids. She’s unable to use her powers and is now forced to behave like a normal teenager. She is vulnerable to the realities of life. Though Will and Mike attempt to protect her, she learns that the real world can be hard too. Having lost her powers, El worries that Mike won’t love her in her weakened state. This is another price she must pay for her strength. Equating her ability to protect others with her overall worth, El has trouble believing her friends will value her for anything else.

When Hawkins is threatened once again, Eleven must try to regain her powers to protect them. In order to do so, she’s forced to return to Papa, the man who stole her childhood and replaced it with trauma. She’s forced to relive painful memories and put herself back in the clutches of her former captives in order to reclaim her ability to save her friends.

But in her absence, they’ve begun to develop strengths of their own. Steve (Joe Keery) recalls the girl they used to depend on with magic powers, reminiscing about the ease of living under the umbrella of El’s protection. Without her to lead the way, Steve has begun to show this initiative for himself. He swims to the bottom of the lake and through the gate to the Upside Down because he knows he’s the strongest swimmer. Nancy has begun to amass guns she keeps as protection, having discovered a talent for marksmanship. They’ve watched El lead and protect for years. Now, they feel capable of doing the same.

This is the ultimate goal of matriarchal leadership, one strong girl inspiring others to cultivate their own strengths. While early seasons depict El as all-powerful, the third chapter shows that there are limits to her abilities. Not simply a superhero, she is human and subject to weakness and vulnerability. And her strength has come with a heavy cost. In order to save her friends and possibly even the world, she’s experienced isolation, pain, trauma, and the loss of her childhood identity. But her leadership is built on the connections she’s forged with her chosen family. She leads in order to protect them and having watched her example, they begin to do the same. No longer a group of terrified friends standing behind a strong girl, they’ve all developed their own powerful abilities to lead and protect.