‘Teeth’ and the Dawn of Adaptive Empowerment [Matriarchy Rising]

In 'Teeth', purity-obsessed Dawn finds power in her second set of teeth. 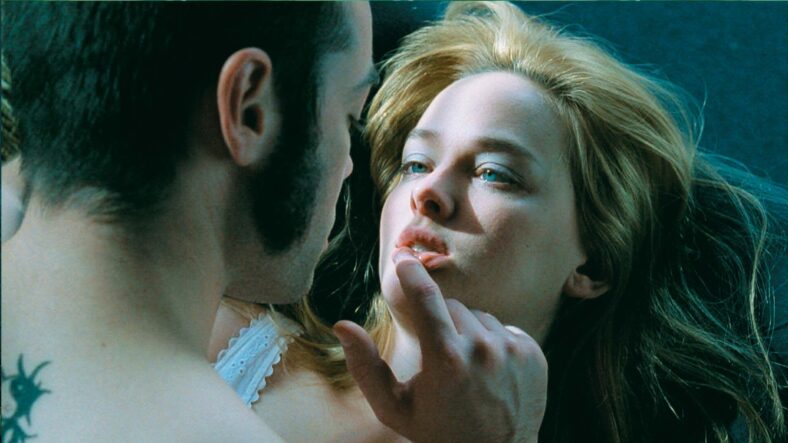 Like its heroine, Mitchell Lichtenstein’s indie horror-comedy Teeth is more than it appears at first glance. The poster shows a woman almost completely submerged in an opaque bubble bath and warns that the film is “the most alarming cautionary tale for men since Fatal Attraction”. The woman is Dawn (Jess Weixler), a virginity-obsessed teenager who discovers that her vagina contains a set of sharp and deadly teeth, a phenomenon known as Vagina Dentata. But the quirky film is so much more than a cautionary tale for men.

It’s the story of a young woman discovering her own sexuality and with it, her empowerment. While definitely terrifying for anyone with a penis, Teeth also explores the dangers of abstinence-only sex education, flips rape culture on its head, and reveals the fallacy of female monstrosity. Throughout the film, Dawn learns to overcome the culture of sexual repression she’s been raised in and stops looking at her body through the lens of fear.

Related: Gale Weathers and the Vilification of Female Ambition

Dawn is an extremely religious teenager. She’s a spokesperson for the film’s version of True Love Waits, an abstinence-only approach to sex education and youth ministry in which young people are taught that it’s their sacred duty to remain virgins until marriage. Early in the film, Dawn gives a speech to a group of pre-teens and teenagers in which she extolls the virtues of remaining “pure”. She equates her virginity to a precious gift she will keep wrapped, waiting to be opened only by her future husband on their wedding night.

During her monolog, she locks eyes with Tobey (Hale Appleman), a new student with whom she shares an instant attraction. On their second date, Tobey rapes Dawn in a cave off the lake where they were swimming. During the assault, her body responds by biting off his penis with the teeth in her vagina. This sets Dawn on a course of discovery of her own body and the truth about what sexuality and empowerment really mean.

Though we first meet teenage Dawn onstage, the opening scene reveals a darker past. As a young child, she was assaulted by her now stepbrother, Brad (Hunter Ulvog, John Hensley). While sitting together in a plastic pool, he penetrates her with his finger and gets a nasty bite in return. Too young to fully understand what is happening, her body protects itself. Though Dawn likely buries the assault deep within her memory, mental scars manifest as a fear of sexual intimacy. This fear is reinforced by the religious program she touts. It tells her that her sexual desires are shameful and giving in to them will cause emotional pain similar to the trauma she probably repressed as a child.

To be clear, there is absolutely nothing wrong with saving sex until marriage. The choice to lose one’s virginity is a personal decision and bodily autonomy means protecting the right to abstinence as well. Dawn talks about the special gift she’ll give her future husband. It’s clear this is a fantasy she holds dear. Her room is decorated with pictures of wedding dresses and she doodles sketches of brides during class. But beneath her sacred vow of purity lies a deep fear of her body as a sexual force and the slut shaming ideology she’s been raised with.

She warns boys to beware of girls who dress like models in a music video. She heaps scorn on girls she describes as giving it away to anyone they pass on the street. She’s internalized the madonna/whore complex; Dawn sees any woman who hasn’t made the same vow of chastity as a dangerous temptress, impure and unclean. After she is raped, she can only see herself as impure. Her perfect future is ruined; she’s devastated to realize that her belief system provides no path to redemption.

In her speech, Dawn describes virginity as a special gift, an object to be saved for a special man who will receive it in exchange for a lifelong commitment. By equating her virginity with a gift, she is objectifying her purity, casting it as a prized possession to be sold in the transaction of marriage. If she has sex with someone else, she will become less valuable as a wife, ruined in the eyes of her future husband. She is essentially using sex as currency, awarding it to the man who will provide her with a life of safety and stability.

This objectification is the essence rape culture in which women are solely responsible for maintaining their “purity” while men prove their masculinity by claiming it. By patriarchal standards, a virginal wife is every bit a status symbol for a man as a prominent husband is for a woman. This harmful ideology is steeped in heteronormativity. It not only shuns non-virgins, but brands queer, trans, and non-binary people as deviant and casts them out of society.

Related: ‘Creep 2’ and the Fallacy of Postfeminism

This is all designed to reinforce the established patriarchal order and maintain control over the next generation of women and non-conforming people. By vilifying female sexuality, powerful male leaders try to prevent their children from making choices that threaten the dominant culture. By teaching women to fear their own anatomy and making them responsible for this prize of purity, they keep men in power. If a woman is raped, she is no longer pure. She carries the stigma of the crime while the man is understood to be a victim of her sexuality and his uncontrollable urges. When Dawn is raped, she immediately questions what is wrong with her own body rather than viewing Tobey’s fate as a natural consequence of his own actions.

Once Dawn discovers the teeth inside her, she begins to investigate the mythology attached to their origins. She learns that the Vagina Dentata phenomenon is a legend stemming from a fear of female autonomy and designed to vilify sexually empowered women. The “toothed creature” is a woman with the ability to defend herself against unwanted penetration. Because this rejection gives her power over a transgressing man, she is to be feared. She becomes a monster threatening patriarchal order. The legend tells of a hero who must conquer these teeth, reestablishing the accepted order in which men are able to take whatever they want with no resistance. The mythology equates sex with a man’s epic journey further reinforcing rape culture’s view of women as gatekeepers to be infiltrated and men the conquering heroes.

As Dawn learns more about herself, she slowly grows into her empowerment. When consulting a doctor for help, she is again assaulted. And once again her teeth defend her, biting off four of her doctor’s fingers. He now bears the scars of his own actions and must carry the burden of explaining what he did. Dawn has physically branded him a rapist. Distraught, she turns to would-be suitor Ryan (Ashley Springer). He feigns concern, gives her one of his mom’s “nerve pills,” draws her a bath, and pours champagne. After passing out Dawn awakens to find Ryan molesting her. They have sex and she’s so overcome with joy that he’s still alive, that the monstrosity she believes her vagina to be hasn’t destroyed him, that she doesn’t even realize that he’s taken advantage of her.

The next morning they’re having consensual sex when Ryan takes a call from a friend to brag about his newest conquest. Disgusted, she castrates him with her teeth and storms out, wondering how she ever could have considered him a hero.

Though Ryan’s actions are inexcusable, Dawn has learned a valuable lesson. She now knows that there is nothing wrong with her. She is not a monster to be conquered and sex is something she can enjoy physically as well. It’s the turning point in her story and the beginning of her sexual awakening. At the film’s climax, Dawn finally gets revenge for the assault in her childhood. She seduces her stepbrother, Brad, then uses her teeth on him. It’s an intentional act that gives her the justice society will not.

Hitchhiking out of town, she again encounters a would-be rapist. The old man who offers her a ride makes crude faces while refusing to let her out of his car. But Dawn’s slow smile at the camera shows that she now knows she has the power and the right to defend herself. She is not helpless against a man who believes he has the authority to claim her body simply because he has a penis. Rather than the prize, she has become the predator. Abusive men are her prey.

In an earlier scene, Dawn’s biology teacher describes adaptations and genetic mutations, a metaphor for Dawn’s transformation throughout the film. She is a highly evolved creature with a new bodily feature benefiting her survival. The teeth in her vagina allow her to defend herself against a world designed to exploit her. She has the ultimate weapon against rape culture between her legs. Though her teeth may keep men from raping a second time, they cannot directly protect other women. But Dawn has another sort of power: her leadership.

Related: God of Power, God of Fear: Religion and Self-Righteousness in ‘Midnight Mass’

In describing her first speech, Tobey marvels over how inspiring the audience finds her. They respond not only to her words, but her passion as well. Even her name, Dawn, evokes the fresh start of a new day; a new beginning. Rather than spread fear and repression, maybe her words can inspire a new generation of young people on the path to discovering who they are and what their bodies can do.

We don’t see the end of Dawn’s story, but I like to imagine her finding a new, more empowered life and giving a different kind of speech. I see her standing on a new stage encouraging young men and women to cast aside the fear they feel when they look at themselves in the mirror.

Perhaps she can inspire more girls to develop their own defenses and empower the boys in her audience to take responsibility for their actions. She has the power to brand them rapists with her deadly bite, yes. But she can also inspire a new generation to brand them rapists with their words. She can also show women that they deserve sexual power and pleasure. Dawn learns that she is not the monster patriarchy paints her to be, and her story has the power to help other women see this as well. Her sexual desire doesn’t make her dangerous; it makes her human. By embracing her body for everything it is and everything it can be, Dawn inspires us all to look at ourselves in the mirror and find a way to love what we see.