Is it really all that bad? 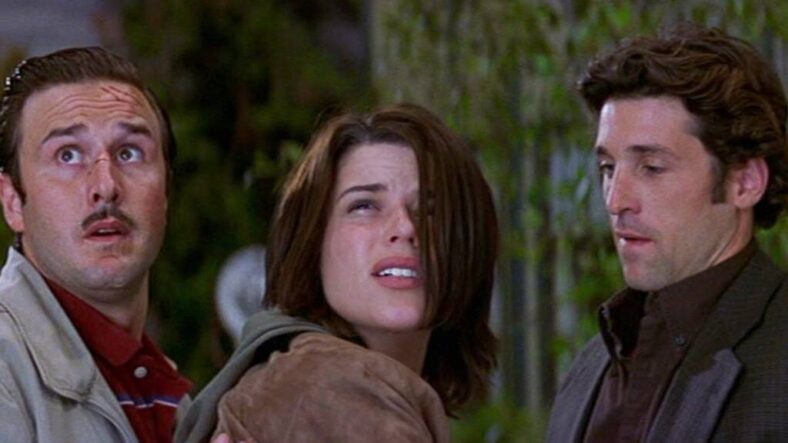 Scream 3 has undergone something of a reevaluation in the 22 years since its release. Once the black sheep of the franchise, the entry radically misunderstood what a Scream movie should be. But since then it’s been recontextualized as an urgent, meta push against Hollywood exploitation in all its forms. What it lacks in narrative cohesion or genuine scares– at times, Scream 3 takes the comedy in horror-comedy a bit too far– it more than makes up for in genuine pathos and adroit social commentary. In retrospect, it’s arguably the only way a third entry could have been done. After the first two, more of the same wouldn’t have worked. As a meta-exercise in the public consumption of death and the victims along the way, it’s a poignant and fitting end (at the time) to the saga of inimitable final girl Sidney Prescott.

Yet, Scream 3 is frequently maligned for some pretty ludicrous narrative pivots. Not the least of which is literally blowing up a house in the Hollywood hills, the moment the franchise colloquially jumped the shark (or blew up the house). Additionally, there’s the glaring matter of central antagonist Ghostface’s voice changer. A staple of the series, Scream has regularly relied on Roger Jackson’s petrifying and raspy voice to instill terror in the audience.

In Scream’s seminal opening scene, Jackson is genuinely talking to Drew Barrymore’s Casey Becker on the phone. He was right outside, hidden in the shadows under a tent, whispering to her over a cell phone. Barrymore’s live reaction to Ghostface’s threats is no small part of what makes the original’s opening feel so real. As such, Ghostface’s voice is as much a part of the franchise as Sidney, Dewey, and Gale (just look at the reaction to the MTV series).

Scream 3 takes it one step further, though. Rather than just Jackson’s voice, the third entry’s Ghostface is inexplicably capable of imitating other voices as well. These aren’t just feigned mimics, either. He can genuinely emulate Liev Schreiber’s Cotton Weary, David Arquette’s Dewey Riley, and yes, even Neve Campbell’s Sidney Prescott. In fairness, it really doesn’t make a lick of sense. At times, it’s aggravatingly contrived, an easy way to move narrative players around without much care. I’d make the case, though, that it works. It works really well.

Most audience members take umbrage with the impracticality of it all. Yes, even today, there still isn’t an easily accessible tool or app that could so successfully emulate another person’s voice. Yet, with that being the argument, the same could apply to Ghostface’s original voice changer. Around the release of Scream 4, the studio briefly released an iPhone app to emulate Ghostface’s lilt and vocal pattern. It wasn’t great. The audio was stifled, and too often, the speaker’s voice broke through. It was a fun gimmick. But it was nowhere near the level of what Ghostface accomplished all the way back in 1996.

Related: ‘Scream’: Should Our Trio Make The Final Cut?

The series has delved in impracticality before, though. Within that context, Scream 3’s voice changer is no more or less egregious than a couple of homoerotic jocks masking their voices in the mid-90s. Additionally, though– and this is the kicker– there’s an argument to be made that Scream 3’s voice changer is meta in all the best ways, a narrative contrivance whether by design or incident that elevates the material.

Scream 3 is about complicity. It doesn’t hold back in indicting Maureen Prescott, sleazy producers, and a film industry that conceptualizes real-life tragedy as a remunerative return. Even Sidney herself isn’t safe from reproval. In hiding herself away from the world, she’s ignored a tragedy that only she can unfortunately stop. It isn’t until her own life is at stake that she’s galvanized to intervene. The voice changer, capable of becoming anyone, augments that. Yes, it’s not really Cotton Weary or Sidney Prescott on the phone. But thematically, it might as well be. Had it not been for their respective actions, the Ghostface killings might not have become the Ghostface killings, a media franchise that by Scream 4 involved time travel and several VOD-quality remixes.

Related: ‘Scream 2’s Opening is the Best in the Series

The meta-element works best of all. With the voice changer capable of emulating any main cast member, it highlights the layers of Scream 3, movies within movies with fans of both on the periphery. Scream 3 is both Scream and about Scream. It’s all very dense, yes, but it’s considerably self-aware. It winks and nods at fan forums and online editorials speculating that Sidney might be any respective entry’s killer, that Stu Macher isn’t really dead or that this has all been Deputy Dewey Riley’s grand design. It’s playful and castigating in equal measure. If it could be anyone, and if it’s a game, it says more about the public writ large’s blasé approach to murder and mayhem than it does convenient plot devices.

In strict movie-making terms, Scream 3’s voice changer is a cop-out. It’s an element wisely discarded by the fourth entry, a bump in the road that likely originated from production woes more than anything else. It only worked in the context of what Scream 3 endeavored to accomplish. With a real-world context of copycat crimes and Hollywood exploitation, it was a tool of censure, an opportunity to indict the filmic and real-world counterparts responsible for the cycle of violence. Yes, it was just a movie/ But Scream 3’s voice changer was a subversive reminder that, in some ways, it really wasn’t.