‘Scream 2’s Opening is the Best in the Series

While 'Scream's' opening is iconic, there's a solid argument to be made that Scream 2's opening is the best in the series. 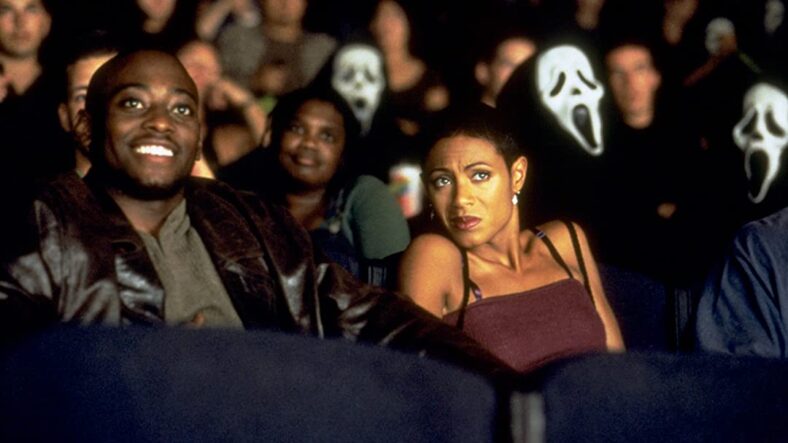 Do you like scary movies? Twenty-five years ago, Kevin Williamson, courtesy of the venerated master of horror himself, Wes Craven, asked a question that reinvigorated a dying subgenre. Years of Jason resurrections and Freddy Kruger zingers—some of which were Craven’s own—had all but drained the last ounce of blood from the slasher subgenre. The craze, once replete with renowned gonzo gore and Guggenheim-level exhibitions of savagery and co-ed slaughter, was relegated to video store bargain bins and soundlessly released junk. For every Dream Master there was Leprechaun, a movie known for Jennifer Aniston and little else, cult-following be damned.

Scream was fresh. Scream was cool. It, as plastered larger than Neve Campbell’s frightened visage on the original VHS box art, was “clever, hip, and scary”. Infamous for not only shifting the trajectory of the entire genre—Scream mimics are arguably a genre of their own—but for being pretty damned perfect in its own right. The landscape of horror today would look very different were it not for two dumb jocks, a Ghostface mask and sundry sinister phone calls.

The opening to Scream commands attention for good reason. It’s unmatched in the horror genre. In just ten minutes of Drew Barrymore tension, Scream cemented its legacy as not just the premier slasher of the 90s, but a premier slasher unencumbered by its decade of release. The tension is seductive and Barrymore is unmatched. One single phone call set off a horror frenzy that, even in 2021, is far from over. Yet, for as wonderful as Scream’s opening ten minutes are, there’s another, arguably more iconic, opening within the franchise that spans four, soon to be five, movies and three seasons of television.

Related: From A Whisper To A ‘Scream’: Youth in Wes Craven and Kevin Williamson’s America

Scream 2’s opening, though not the best in the franchise, might very well be the most Scream-like. In retrospect and when sufficiently recontextualized, Scream 2’s introduction is meta. It actively involves the audience. They are spectators to the horror on display. This opening truly, sincerely distills what the series is about. Scream 2 does this even better than the first, in large part because it works within the context of what Scream is. It’s something Scream itself couldn’t do because Drew Barrymore’s savage murder was, at the time, sequestered from what Scream meant and could be.

Jada Pinkett Smith’s Maureen Evans and Omar Epps’s Phil Stevens—plays on both Maureen Prescott, Sidney’s mom, and OG victim Steven Orth—are at the movies. Phil scored tickets to an early premiere of Stab, the movie-within-a-movie based on the events of the original Scream. It’s Inception-levels of influence, with the opening to Scream’s sequel revolving around an in-universe remake of the first movie itself. Maureen would rather see Sandra Bullock down the street, but Phil insists. Inside, the two spout some of Kevin Williamson’s best rapid-fire repartee. Surrounding them is a sea of other guests in Ghostface costumes the studio sent them.

In an inspired choice, Stab doesn’t just exist. It stars Heather Graham and is directed by Robert Rodriguez. Maureen and Phil take their seats in the raucous auditorium as the movie starts. Immediately, the audience is transported beyond the movie. Maureen and Steve are Maureen and Steve, yes. But they’re also the audience, two small parts of a rabid fanbase eagerly anticipating the next act. That same anticipation accelerated Scream 2’s production, with it releasing less than a year after the first.

It’s meta, it’s knowing, it winks and nods while carving out a space of its own. It’s distinct yet wholly familiar. A play on 1980’s He Knows You’re Alone—the original’s opening similarly drew contextual influence from 1979’s When A Stranger Calls—it nonetheless manages to feel like its own thing entirely. It uses the foundation of the original and the perceived innate safety of the public sphere to subvert and twist the audience. Drew Barrymore dying in the original was a welcome twist. Jada Pinkett Smith and Omar Epps dying would cement the series’ legacy of offing A-list talent in the opening frames. Scream suggested the rule; Scream 2 cemented it.

The familiarity with the rules of the first work in its favor. As the opening is recreated in quick vignettes from Stab, Maureen and Phil are similarly stalked by a killer in their midst. Phil, taking a quick bathroom break, is killed by Ghostface. Ghostface himself returns to Phil’s seat, and when Maureen feels blood, stabs her to death. She dies dramatically—theatrically—in front of the auditorium, with the entire audience unaware that she’s been killed. They think it’s a publicity stunt.

Related: ‘Scream’ Star David Arquette Was Nearly Killed Off In The First Film

It illuminates the thin line between fictionalized violence and real-world violence brilliantly. Movies don’t create psychopaths, but movies do glorify them. The Stab audience no less fervently demands death than horror fans. Wes Craven himself is famous for noting that he never wanted his death scenes to be “fun” because death itself was never, ever fun.

There are certain rules one must abide by to create a successful sequel. The body count is always bigger. The death scenes are always much more elaborate. The third rule is never delineated, but it might well be that the opening needs to top the original. Whether Scream 2’s opening is better is certainly up for debate. Though while the original is historic, the sequel conceptualizes the series better than it ever has been. It’s clever, it’s hip, it’s scary. It’s Scream 2, baby.