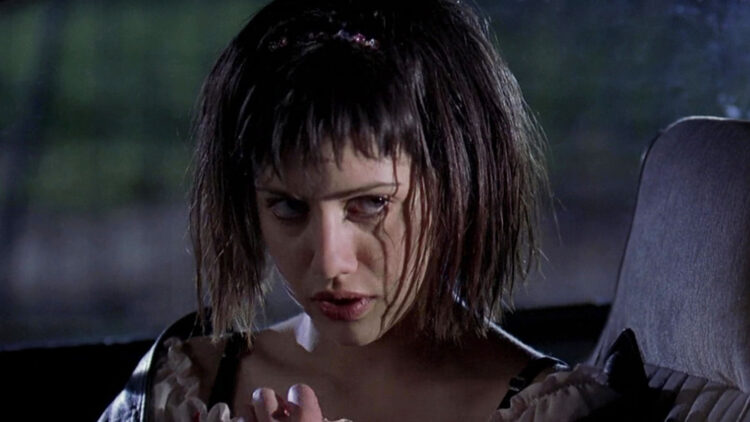 In this installment of The Overlook Motel, we will be taking a look back at the tragically underseen horror film, Cherry Falls. This flick features a solid cast, a giallo-esque mystery, and it frequently subverts established genre tropes.

The film sees the titular town of Cherry Falls plagued by a rash of murders targeting high school virgins. In response, the town’s youth make a mad dash to lose their virginity. But will they seal the deal before it’s too late?

Cherry Falls delivers a solid cast of characters, featuring a good mix of up-and-comers and established names alike. The late Brittany Murphy, Jay Mohr, Jesse Bradford and Michael Biehn lend star power circa 2000. And the supporting cast is rounded out with the likes of Gabriel Mann who would eventually feature on shows like Revenge and Ray Donovan.

In addition to effective casting, the film also benefits from daring to be different. The expectation in horror cinema has long been that if you have sex, you die. But this flick subverts that unwritten rule and upends it by delivering a killer that only targets virgins. It’s nice to see a stalk-and-slash picture take a somewhat sex-positive approach and try something a little unexpected.

The deliberate defiance of established genre tropes was likely a response to the success of Wes Craven’s slasher masterpiece, Scream. But unlike many of the flicks that tried to cash in on the mega-success of Scream, Cherry Falls manages to justify its existence. Sure, it’s Scream-inspired. But it’s not a Scream clone and it has plenty to say. Of the films released in the wake of Scream’s success, this is easily one of the most noteworthy.

Beyond subverting expectations, the film also earns points for being bold and playful. To name a movie about the race to lose one’s virginity Cherry Falls is a bold statement. But it’s also catchy and fitting. The film’s brand of humor is often cynical and raucous like the title implies, so in spite of being a little on the nose, the name is pretty fitting.

Wry wit aside, Cherry Falls also serves up some great chase sequences and quite a few atmospheric scares. The schoolhouse set is utilized to great effect. Particularly memorable is the use of a large replica of a great white shark being weaponized as one character attempts to evade the killer.

Director Geoffrey Wright and screenwriter Ken Selden take a lot of their cues from the giallo films of the ‘60s and ‘70s. The audience sees glimpses of the killer but mostly from behind or via POV shots. The flick also makes effective use of red herrings and misdirection, which should serve to keep the viewer guessing and on his or her toes.

Sometimes it can be difficult to discern why a film hasn’t found its audience. But it is pretty easy to guess why Cherry Falls is still woefully under-seen. The film had a troubled road to distribution. After screening at Cannes, it was acquired with the intent of a theatrical exhibition. But instead, the picture made its debut on the USA Network. Beyond that, the film wasn’t widely available on physical media for some time. Accordingly, Cherry Falls remains unseen by many horror fans.

As of publication, Cherry Falls is available for purchase on physical media thanks to Scream Factory. So, get your copy before it falls out of print!

Fun Fact: With a budget of $14 Million, Cherry Falls has the distinction of reportedly being the most expensive made-for-broadcast-TV film to date.