Nobuhiko Obayashi’s film brings to life a fantasy world that is unparalleled in its creativity. 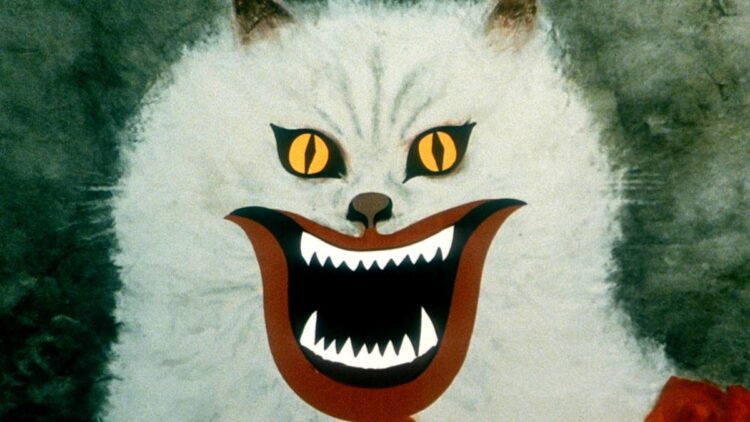 In the latest edition of The Overlook Motel, we will be taking a look back at Nobuhiko Obayashi’s surreal masterpiece, House (1977). In short: House is what I would expect an acid trip might feel like. It is equal parts zany, bizarre, and surreal. The film unfolds like a delightful and strange dream from which you almost don’t want to wake.

Disenchanted with her father for finding a new love interest after the death of her mother, Gorgeous attempts to reconnect with an aunt she hasn’t seen in some time. She and her friends take a trip to the aunt’s country estate, where they soon realize they are in grave danger. The group of giggling schoolgirls must contend with carnivorous pianos, evil cats, and so much more.

The film’s plot is fairly threadbare. But that’s by design. Obayashi is more concerned with dazzling the audience with catchy visuals and surreal situations than telling an overly intricate story. And on that level (among others) House succeeds remarkably.

Related: The Overlook Motel: ‘Housebound’ is Brimming With Chuckles and Chills

The simplistic narrative allows the flick to showcase its greatest strength, which is just how imaginative it is. Unincumbered by physics, cinematic norms, or the need to make sense, Obayashi lets his imagination run wild as he brings Chiho Katsura’s screenplay to life with striking visuals and a childlike sensibility.

Further adding to the film’s dreamlike qualities, all of the performances are over the top and often comical. Nearly all of the dialogue is shouted with gleeful enthusiasm and usually followed by a hearty round of boisterous laughter from the school-aged friends.

Obayashi consulted his pre-teen daughter for input while conceiving ideas for the film. Several of her suggestions, along with some of the director’s own ideas, were passed along to Katsura (who included a number of said ideas in the script).

Given the whimsical nature of the film, viewers may be surprised to learn that House was heavily influenced by the atomic bomb and Hiroshima. On the surface, it feels like a hallucinatory fever dream. But there are a series of themes and references that reflect a childhood robbed of innocence by way of tragedy. One straightforward example is the film’s villain literally attempting to steal youth from the ensemble cast.

The juxtaposition of childlike fantasy and real-life tragedy may seem diametrically opposed. But, the unlikely pairing works to tremendous effect. House is a sensory delight and a welcome return to the utter simplicity of one’s youth.

Related: The Overlook Motel: ‘Cold Sweat’ is a Must-See About Catfishing, Octogenarian Terrorists

Among the film’s most memorable visuals are the malevolent mirror image, the dancing skeleton, and the hungry piano. But rather than provide too much detail about any of that, I will stop there in the hope you will take the time to experience House for yourself.

There aren’t a large number of utterly terrifying sequences contained within the picture’s runtime. Obayashi’s aim was to delight with slick, psychedelic imagery. Terror often takes a back seat to the primary initiative. But there are, nonetheless, a couple of good scares to be had.

House wasn’t available in the US prior to Criterion acquiring stateside distribution rights. So, you’re not alone if you haven’t seen this whimsical foray into the fantastical before. However, if you’re curious to check it out (and I hope you are) the flick is available to stream on HBO Max as of the publication of this post