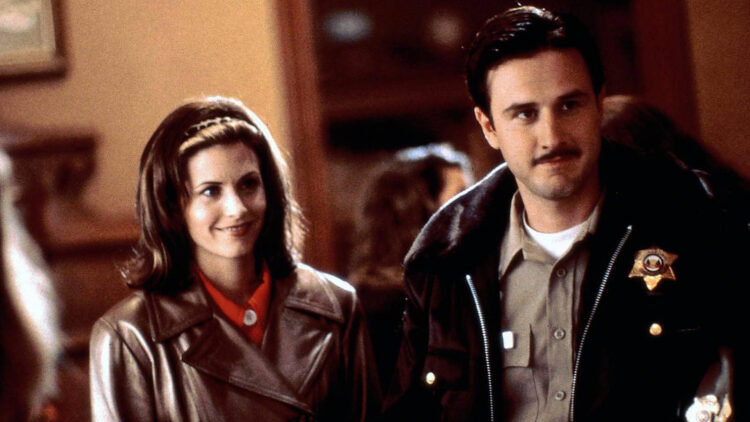 Veteran Hollywood actor David Arquette gets personal this week on Late Night With Seth Myers about the history of his marriage to Scream costar Courteney Cox. He also shares the story how Wes Craven nearly let Dewey die off at the end of the first film.

Cox and Arquette, the horror royalty couple, met on the set of the original Scream film in 1996 where they initially fell in love. David and Courteney would get married in 1999 around the release of Scream 3 and had a child together in 2004. Their daughter, Coco, is now seventeen years old as the exes promote the fifth film in the Scream franchise.

Fans of the slasher series will remember watching in near real time as David and Courteney’s romance blossomed on and off screen. Now the star of the series sits down with Seth Meyers to confess that if it weren’t for Wes Craven, he’d likely never have had Coco.

“Thank god for Wes Craven because I got a baby out of it,” the actor said of his 17-year-old daughter during his appearance on Late Night With Seth Meyers this week. “I mean, not Wes Craven, thank Courteney Cox!”

Besides sharing the dirt on his marriage, David also shares the story how Dewey was nearly left for dead. If you haven’t heard the story before, check out the video below. It’s a classic.

“The first Scream we were falling in love, the second Scream, she hated me,” Arquette shares of his marriage to Cox. The pair had a fairly public falling out when they separated in 2013, two years after the release of Scream 4.

During an interview Entertainment Weekly, Arquette opened up about working on the fifth film after Wes Craven’s death. “I’m not overly religious or anything, ” he shared, “but I definitely was speaking to him, praying about it. It brought back a ton of memories of Wes, and that was emotional, you know, but it was beautiful. There were little signs. There were certain takes where the wind would blow, and, I don’t know, I just felt his energy.”

Lastly, what do you think of the upcoming Scream release? Let us know in the comments below or on Facebook, Twitter, or Instagram! You can also hit me up on Twitter via @joshkorngut. I’m always down to talk all things Ghostface.